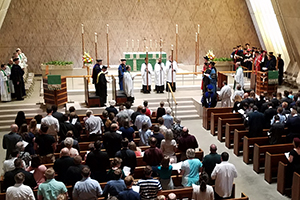 FORT WAYNE, Ind. (CTSFW)—Shortly after 10 a.m. on September 4, 2018, the Rev. Dr. Lawrence R. Rast Jr. declared the beginning of the 173rd academic year of Concordia Theological Seminary (CTSFW), Fort Wayne, in the name of the Father, Son and Holy Spirit. President Rast preached for the Opening Service, speaking on the demands of Seminary in context of Jesus’ declaration that His yoke is easy, His burden light. “Some of you take up that yoke for the first time today as a student,” he said. “Others have been doing so for some time. But those of us who have been around for a bit know that the Seminary isn’t easy; and it’s not supposed to be. We are a graduate school of theology. We are academically demanding. The courses are not light. If the classes don’t get you to this point, fieldwork and family needs will contribute to that as well. And so this text, which our Lord intends to be comforting, can cause us distress.

“But when you feel this way, remember,” he continued. “You are so dear to our Lord Christ that He yoked Himself to the burden of the law, fulfilling it. He yoked Himself to death in your place that you might have life. And now you are yoked to Him through baptism into His death, so that just as He was raised from the dead, you and I too will have newness of life eternally.”

After the sermon, the following men were installed as newly appointed faculty and ordained staff: 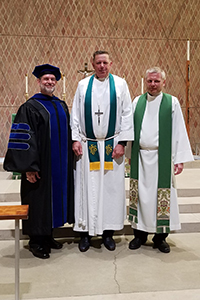 “And so redeemed by Christ, baptized into His death and resurrection, knowing the Father because Jesus has chosen you to receive His revelation: be at peace,” President Rast concluded in his sermon, speaking to the Seminary community, drawn together by their roles as faculty, staff, students and family. “For Christ is your peace, your Sabbath; rest and remain in Him today and always.”

To listen to the sermon or to watch the installations, a video recording of Opening Service will be available at www.facebook.com/ctsfw until Monday, September 10.