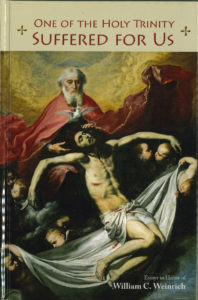 Very few books come with a title with such theological depth as the recently published Festschrift for William C. Weinrich, One of the Holy Trinity Suffered for Us. Trinity Sunday, which commemorates the mystery of God as Father, Son, and Holy Spirit, comes several months after Good Friday, and it may not be evident that the two commemorations belong together. Christ’s death for our sins is the object of our faith and, on that account, crosses are placed on our altars. We are accustomed to hearing “Jesus died for us,” “the Son of God died,” or as Paul says, “at just the right time . . . Christ died for the ungodly” (Rom 5:9 NIV). Christ’s death for our sins was part of God’s eternal plan. It was not just a random moment in time. In his sermon on Pentecost, Peter called his hearers to repentance for calling for the crucifixion of Jesus; however, it happened according to the foreknowledge of God (Acts 2:23 NIV). The second stanza of the hymn “O Darkest Woe” has this startling line: “O sorrow dread! Our God is dead.” This does not mean that God went out of existence, as was proposed in the formerly popular “God is dead” theology of the 1960s and 70s. God Himself is life and the source of all life. In preaching to the Athenians, Paul said as much: “In him we live and move and have our being” (Acts 17:28 NIV). So does it mean that God died?

Death in the Scriptures does not mean that the one who dies no longer exists. Rather in death, the soul is separated from the body. As the book of Ecclesiastes says, the body returns to the earth and the soul to God who gave it (12:7 NIV). Jesus was God, but as a man, He died the kind of death that all die. In dying He entrusted His soul to God, “Father, into your hands I commit my spirit!” (Luke 23:46 NIV). And so Stephen committed his soul to Jesus. “Lord Jesus, receive my spirit” (Acts 7:59 NIV), and he became the first of many martyrs who died confessing Christ, whose souls are safely with Him (Rev 20:4 NIV). Jesus promised the thief who was crucified with Him that he would, on the day of their death, be with Him in paradise (Luke 23:43 NIV). Jesus’s words on the cross, “It is finished” (John 19:30 NIV), do not refer to His death as the soul leaving the body, but signals that His suffering for our salvation had been accomplished. This was happening as He was speaking these words “My God, my God, why have you forsaken me?” (Matt. 27:46 NIV). When He committed His soul to God with those words, the atonement for all was a completed reality.

Christ’s suffering was literally hell. Along with the extreme agony of being put to death by crucifixion, God the Father had removed His gracious presence from Him. Matthew points to God’s abandonment of Jesus when he says that, from noon to 3:00 p.m., there was a darkness over the face of the earth (Matt. 27:45 NIV). In His preaching, Jesus spoke of the horror of hell as the outer “darkness” (Matt. 8:12, 22:13, 25:30 NIV), the place where the light of God’s presence is absent. Death by crucifixion may have been the cruelest form of execution ever designed, inflicting pains throughout the body. Until the moment of death, this form of public execution exposed the victim to public ridicule. Being forsaken by God is unimaginably worse. God’s abandonment of Jesus in His crucifixion is the most profound moment in time and in eternity because it involved all three persons of the Trinity, which, in and of itself, is the mystery of all mysteries.

All this is contained in the title of the Festschrift for the Rev. Dr. William C. Weinrich, One of the Holy Trinity Suffered for Us. It is also all made visible in the painting that graces the cover, by the Italian painter Jusepa de Rivera (1591–1652), of the Holy Trinity, placing Christ’s atonement for sin within the very essence of God. At the center of the painting is the corpse of Jesus, resting on a shroud stained with His blood. Suspended in space (indicating that Christ’s death was more than just another event in time), the shroud is held by angels who turn their faces away, daring not to look upon the tragedy brought about by man’s sin. Wounds in the hands, feet, and side of Jesus are visible, indicating that Jesus’s death happened in time. In the painting, the Father looks forlornly down on the corpse of Jesus, signifying that this was the only way in which humankind could have been redeemed from the tragedy of sin which separated them from God and which all had brought upon themselves. In offering Christ as an atonement, God was not coerced by anything outside of Himself. He did it out of a sense of His own love and His own righteousness. He loves because He is love, not because of an external ideal of love. He is righteous not because of an external ideal of law, but because He is righteous in Himself. God is moved to do what He does because of what He is in Himself. In Him righteousness and love exist in perfect harmony with each other. His righteousness required responding to man’s disobedience with exclusion from His presence, and His love for the creature, created in His image, moved Him to offer His Son as an atonement to bring the disobedient creature back to Himself. Without atonement for the transgression, God would offend against who He is. As it says, “The Lord is our righteousness” (Jer. 33:16 ESV).

Execution by crucifixion was not uncommon in the ancient world. The Persians did it, and the Greeks took it over, and the Romans perfected it until it was abolished by Emperor Constantine in the fourth century. The crucifixion of Jesus may have been a perversion of justice in that He had done nothing that made Him deserving of death, but so had others been put to death unjustly. What made Christ’s death an exception was that it happened in heaven and, to be more exact, it happened within God’s own being, in which Jesus not only as the Son offered Himself as a sacrifice to God, but also, in the same act, God offered His Son as a sacrifice. In de Rivera’s painting, hovering above the hands of the Father, on the head of the Son, is the Holy Spirit, in the form of a dove, who had assisted Jesus in His suffering and through whom God would raise Jesus from the dead. As the sin-bearer, Jesus was abandoned by God, but in carrying out God’s will, in offering Himself as a redemptive sacrifice, the Father never abandoned Him. Those who are in Christ are, in life or death, never abandoned by God. The title of the Weinrich Festschrift says it all: One of the Holy Trinity Suffered for Us.