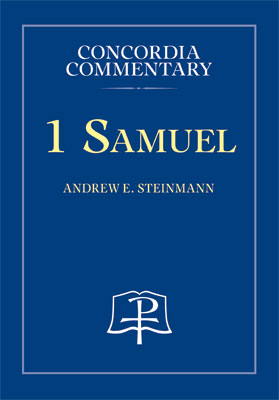 Andrew Steinmann has written a commentary of 1 Samuel for the Concordia Commentary Series that is rich in grammatical notes, well informed by his own previous exegetical work and study of biblical chronology, and faithful to the Lutheran confessions. A forty-page introduction provides enough background to orient the reader to critical theories, historical issues, literary features, and theological themes in 1 Samuel, but the commentary’s focus is on the text itself. Because of this brevity, there are no separate discussions of 1 Samuel’s literary structure or relating the book’s contents to the prior biblical history of Joshua, Judges, and Ruth. In contrast to the way some authors handle 1 Samuel, Steinmann’s approach reads it as more than a narrative about Samuel, Saul, and David, the central human characters. The book’s purpose “is to portray a God who deals patiently and mercifully with sinners—Israel as a whole as well as its leaders” (9). He understands David as “a prefiguration of Christ” (25), highlights the role of God’s anointed, and explores the priestly, kingly, and prophetic offices in 1 Samuel. Pastors will also find the commentary helpful in answering questions about polygamy, the Urim and Thummim, the evil spirit that came upon Saul, and his interaction with the medium at En-dor.