A Defense of the Lutheran Faith

A Defense of the Lutheran Faith 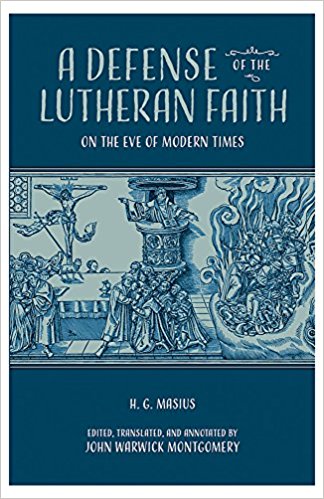 John Warwick Montgomery has provided a service in translating this theo­logical apologetic from the end of the seventeenth century in Paris. The author, H. G. Masius, was a Danish Lutheran theologian who was appointed chaplain to the Danish embassy in Paris in 1682. The original was written in French. He divided the work into two parts: the first, in which he demonstrated on the basis of their own hypotheses that the Lutheran religion cannot be condemned by Roman theologians; and the second, in which he put forth the fundamental differences between the Lutheran and the Roman churches. The work was directed solely against the Roman church using Scripture, the assertions of Roman theologians, and reason. He offered short chapters on the Pope, traditions, the invocation of saints, purgatory, the seven sacraments, the sacrifice of the mass, original sin and free will, evangelical counsels, and justification and good works. He returned to these topics in the second part, giving particular attention to the Scriptures and unwritten traditions, the invocation of saints, purgatory, communion in one kind, transubstantiation, the mass, and justification and the fulfillment of the law.

The value of this work is found in the procedure Masius used to interact with the dominant Roman religion in France at a time of anti-Protestant bias. Masius demonstrated an extensive knowledge and interaction with his opponents’ writings. The book affords the modern reader the opportunity to evaluate the importance of being prepared to give a defense of Lutheran theology to theologians, popular proponents, and laity of an opposing theological persuasion, as well as to consider the effectiveness of using the opponents’ works and human reason along with Scripture in that defense. It should be noted that Masius did not quote the Lutheran Confessions in his defense, though he did know them.

One jarring discord in The Defense is in Masius’ explanation of the Lutheran teaching of the Lord’s Supper. He posed the question, “But surely Jesus Christ said, speaking of the bread, ‘This is my body’?” He responded, “I answer, ‘No’” ( 105). He explained by asserting that τοῦτό in the words of institution does not refer to the bread. Montgomery, in an explanatory footnote, writes that “τοῦτό must reference the total sacramental act of the giving of the bread.” But the Lutheran Confessions explicitly reject this circumlocution, stating for example that Jesus “spoke these words about the bread, which He blessed and gave, ‘Take, eat; this is My body,
which is given for you” (FC SD VII 44).[1] The oral eating and the unworthy eating of Christ’s body are both bound up with the assertion that the bread of the Lord’s Supper is the body of Christ. Masius’ discussion serves as a warning that a vigorous rejection of Roman errors not propel Lutheran theologians into Calvinist language or thought.

A Defense of the Lutheran Faith will be useful for training theologians in the defense of Lutheran doctrine and as a primary document in the history of Lutheran theological apologetics. I do not recommend this book for general use, since the sound understanding of the Lord’s Supper could be damaged by the misleading assertions found in it.