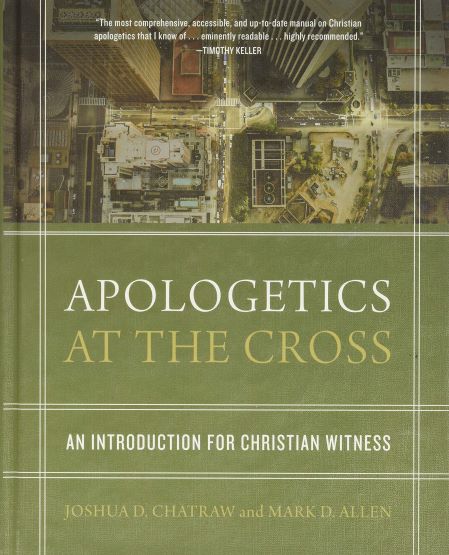 As the subtitle indicates, Apologetics at the Cross is intended as an introduction to apologetics. The book integrates a variety of disciplines and seeks to provide “a biblical, historical, philosophical, theological, and practical vision for offering an appeal for Christianity in our contemporary context” (23). This variety is focused on the cross, which the authors take as synonymous with the gospel (29). All apologetic appeals must serve the goal of bringing people to the cross even as cruciform humility and suffering for the good of the other must shape the way apologetics is done. Christ must be in focus at all times (43).

Both authors come to the task from a prior attitude that apologetics is irrelevant—either because only the gospel is essential and the typical apologist seemed ill-suited to interact with people, especially non-believers (18–19), or because antiquated apologetics answered questions no one asked in a cerebral, intimidating way (19–20). Subsequently, practical circumstances caused both authors to learn to appreciate apologetics. They now serve in theological education at Liberty University—Chatraw in apologetics. Thus, they are well-suited to address the continued place of Christian apologetics in an era of skepticism about its relevance.

The book consists of three major parts—“The Foundation for Apologetics at the Cross,” “The Theological Structure for Apologetics at the Cross,” and “The Practice of Apologetics at the Cross”—each approximately a third of the book comprised of several chapters. The authors first provide a biblical and then a historical basis for the apologetic tasks. The biblical basis treats more than a few proof texts (like 1 Pet 3:15) or oft-cited counter proof texts (like 1 Cor 2:1–5). It uses an inductive approach to show fifteen apologetic approaches depicted in Scripture—approaches that are both contextual and directed toward Christ’s life, death, and resurrection (61). The historical basis seeks to elucidate apologetics from the early church to the twentieth century, highlighting in summary fashion many apologists and apologetic approaches.

The authors reserve more contemporary apologists for the second part of the book, in which they make sense of methods, emphasize cruciform humility in the apologetic task, argue for a holistic apologetic, and consider a biblical (Pauline) approach to contextualization. There is a good summary of four primary approaches to apologetics—Classical, Presuppositional, Evidential, and Experiential/Narratival—complete with what this reviewer considers the best diagram in the book (106). Discussion of each approach includes potential strengths and weaknesses, as well as excerpts from the writings of representative authors. The need for proclamation of the cross (gospel) is the ultimate goal of word and deed, and apologetics is a servant. Cruciform humility must characterize the apologist, and a la Luther’s two types of theologians, “apologetics at the cross” is distinguished from an “apologetic of glory” (146). Contextualization is necessary and inherent in the gospel since it “was revealed in a particular culture” and must be “translated into the language and thought forms” of the target culture (186); however, such contextualization must faithfully proclaim the universal truth of the cross.

Thus, in the final third of the book—on the practice of cruciform apologetics in our late modern context as they refer to postmodernism (205)—the authors propose an inside out approach that places “the gospel and a robust Christian theology . . . at the center of apologetic interactions and woven into the dialogue throughout,” focusing “on points where Christianity overlaps with the views of other people” (214). They apply this approach to four cultural “givens” in the West: modern pluralism, the ethics of authenticity, religious lethargy, and the therapeutic turn (222). In a chapter dealing with eight common defeaters—skeptical objections and earnest questions about Christianity—the authors provide a middle ground for beginning to exercise the apologetic task. Each defeater comes with a discussion of the issue from a Christian perspective, approaches to a response, and suggestions for further reading on the topic. While these eight defeaters are not exhaustive, they cover several oft-cited obstacles to faith. But the apologist does not merely refute obstacles to faith and then present arguments for Christianity; these should not “be abstracted from the genuine discipleship and worship of the church” since “the church is both a living apologetic appeal and the formative context out of which apologetic arguments are supported as plausible” (291). The concluding chapter addresses making a case for the Christian faith both from observations and experiences that “point to a transcendent reality beyond our universe” (306) and by providing Christian answers to the “deep questions of life” like: “(1) Who are we? (2) What is the problem with the world, and what is its solution? and (3) Where are we going?” (307).

The authors do a decent job of keeping things cross- (gospel-) centered while approaching apologetics from a variety of disciplines. As an introduction, it serves well, covering much ground at a survey level while providing helpful direction for further reading on specific topics. It also includes several tables, diagrams, and insets that summarize and visualize content.

However, the tables and diagrams are not labeled and, therefore, not listed in the table of contents. Such a list would be helpful to the reader (especially if the book were used in an academic setting). More importantly, it is superficial both in its treatment of topics and in its use of the select secondary literature, making this book less useful to a more serious student of apologetics. Finally, while there is a chapter devoted to a holistic apologetic approach—reaching the whole person as a thinking, believing, desiring being—the book does not convincingly achieve its goal of emphasizing this holistic apologetic throughout.

Nevertheless, this book is a worthy read for beginning apologists as well as those looking to make a renewed start.