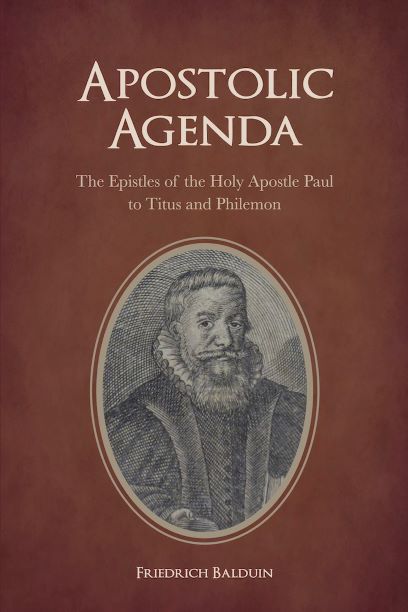 Apostolic Agenda: The Epistles of the Holy Apostle Paul to Titus and Philemon is the first full work of the Lutheran casuist Friedrich Balduin (AD 1575–1627) to be translated into English by two Lutheran pastors at home in the Latin of the early seventeenth century. The Master of Divinity class of 2020 at Concordia Theological Seminary, Fort Wayne, Indiana, was motivated to commission the translation of this work as their class gift, and they were soon joined by the Alternate Route class of 2019 and deaconess students in various degree tracks (xxii; for all the students involved, see “Patrons of This Translation,” vii). Dr. Benjamin Mayes ought to be commended for heading up this project, dealing with all the intricacies of translating and editing involved, working directly with student leaders from beginning to end, and writing the Historical Introduction, which orients modern readers to the life of Friedrich Balduin (ix–xi), his writings (xi–xiv), the exegetical literature of Lutheran Orthodoxy (xiv–xviii), and exegetical methods used (xviii–xxii).

I was most eager to compare Balduin’s treatment of Philemon to my own, prepared some time ago for the Concordia Commentary Series (John G. Nordling, Philemon [St. Louis: Concordia, 2004]). Like many conservative commentators still today, Balduin holds that this shortest epistle was really authored by the apostle Paul and that Onesimus was a runaway slave (Latin fugitivus) who stole from his master Philemon before fleeing from Colossae to Rome in the mid-first century AD (208–209)—all points challenged by moderns to greater or lesser extent. Mayes is of the opinion that Balduin wrote his commentaries on Titus and Philemon as a result of “academic disputations” (xviii). Thus, he divides each chapter with a simple two-part outline, provides the Greek text with his translation in Latin alongside the Greek, and then adds an “Analysis and Explication” wherein is furnished the context of each verse, parallels to other biblical passages, geography, history (as appropriate), and word definitions—often with reference to classical and patristic literature. Next come “Questions” with their answers, wherein Balduin grapples with apparent contradictions between the text and other passages of Scripture, or the received Evangelical Lutheran doctrine. Finally, there are “Theological Aphorisms,” which are things to be believed and done (credenda et agenda) as drawn from the text. Balduin follows this pattern of explication for both Titus (1–207) and Philemon (208–251). Again, the translation reads well, and one’s sense is that all textual matters are dealt with satisfactorily in the commentaries of these two Pauline letters.

Mayes avers that the literature of Lutheran Orthodoxy has received a bad rap for being rigid, scholastic, and overly given to dogmatic assent (xv). Balduin’s masterful writing proves, however, that the common complaints cannot be justified. Whereas many of today’s commentaries rely on the exegetical insights of earlier commentaries prone (in many cases) to historical criticism and other harmful influences, Balduin’s work more often relies upon the ancient and Lutheran church fathers, classical sources, or, indeed, parallel Scripture passages that arise from the theologian’s command of the biblical evidence. (Of course, Balduin also engages hostile interpreters and false doctrine, for such “rebuking” is necessary for the propagation of the true doctrine [2 Tim 3:16].) Still, all Balduin’s interpretations are noteworthy for their soundness—that is, for their ongoing pertinence to the church’s faith and life, and not for novelty or idiosyncrasy. I predict that Balduin’s faithfully sound exegesis will enliven the teaching and preaching of many Lutheran pastors today who use this marvelous translation in the course of their ministries.