Edited by Robin A. Leaver 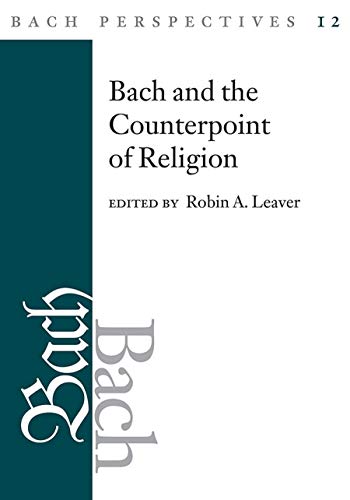 A couple caveats are in order regarding this book. First, it is organized as a collection of seven essays with topics directly or indirectly related to the life, work, and influence of the great Lutheran kantor, Johann Sebastian Bach. The essays bear no other resemblance or similarity to each other, but span a wide variety of topics, much like the contents of a Festschrift.

Second, although there is an assumption of a good deal of prerequisite knowledge of Bach’s life and work on the part of the reader, the casual Bach scholar or self-described non-musician should not discount or pass over consideration of this volume. It is a testimony to the wide reaching impact of Bach studies that many disciplines intersect with the essay topics represented, such as theological mysticism, Hebrew studies, and church history. A summary of the essays follow:

“Historical Proximity: John Wesley Visits Leipzig in 1738” (Mark Noll): A fascinating, although at least slightly contrived, account of a historical “what if,” considering the possibility of Wesley seeing or hearing Bach while visiting Leipzig.

“Dancing in Bach’s Time: Sin or Permissible Pleasure?” (Joyce L. Irwin): A description of Bach’s music that employs formal dance rhythms, with a strong emphasis on the history of theological considerations and interpretations regarding the permissibility of Christians engaging in dance.

“A Catholic Hymnal for Use in Lutheran Leipzig” (Robin A. Leaver): An historical analysis of an obscure hymn collection published for use by the tiny Roman Catholic community in Leipzig in the early 1700s.

“Liturgical Music for a New Elector: Origins of Bach’s 1733 Missa Revisited” (Janice B. Stockigt): The background of one of Bach’s Missa (i.e., a musical setting of only the Kyrie and Gloria in excelsis), composed in 1733.

“The Church under Persecution: Bach’s Cantatas for the Fourth Sunday after Epiphany” (Derek Stauff): The texts and context of these cantatas are interpreted through an exegetical lens, as the Gospel for this Sunday (Jesus Stills the Storm, Mt. 8:23-27) is allegorized as the church being safeguarded through the tempest of persecution.

“Music Historicism: Sara Levy and the Jewish Enlightenment” (Rebeca Cypess): This final essay has only a tangential connection to J.S. Bach. It is primarily a summary of the influence of Sara Itzig Levy, a Jewish woman who was a student of Bach’s son Wilhelm Friedemann.

As described in the opening paragraphs of this review, there is a bit of “something for everyone” among the contents of this collection. For this reviewer, among the most interesting and enjoyable is Robin A. Leaver’s essay, “A Catholic Hymnal for Use in Lutheran Leipzig.” This essay stands out because in the world of Bach research, it is ironic to delve into a topic where Bach had absolutely no connection or participation, namely, the worship life of the small Roman Catholic chapel in 18th century Leipzig. This small Roman Catholic community was vastly outnumbered by the overwhelmingly Lutheran population of Bach’s Leipzig, but ballooned into a much larger assembly during the city’s various fairs and festivals during the year. Most interesting for the Lutheran reader is the striking amount of familiarity with some of the contents of their hymnal. They include the pre-Reformation German hymns and Latin chants that Luther and others improved and incorporated into Lutheran practice, such as Gelobet seist du, Jesu Christ (“We Praise You, Jesus, at Your Birth”, LSB 382), Christ ist erstanden (“Christ is Arisen,” LSB 459), and Veni, Creator Spiritus (“Come, Holy Ghost, Creator Blest,” LSB 499).

The bottom line is that this volume is interesting and contains a wide variety of topics for the reader. It is not necessarily the most practical resource, as all books do not fall in that category. Rather, this serves as a very specialized collection of essays for the discerning scholar and student, regardless of his or her interest and association with Kantor Bach.