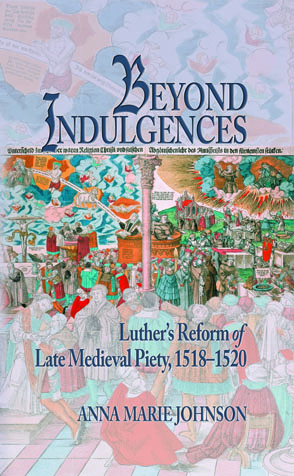 This fine study evaluates Luther’s theological development and his early advocacy of reform in the critical years of 1518–1520 through analysis of twenty-five pastoral writings written in the wake of the Ninety-Five Theses and in the midst of the controversy over indulgences that led to Luther’s excommunication. Johnson chose pastoral writings written during this critical time because they have not been substantially incorporated into the numerous accounts of Luther’s “road to ref-ormation.” Indeed, Johnson structures her book with chapters analyzing the practical concerns Luther addressed in these writings between the chronological high points usually emphasized on that road: Lent 1518 (between the Ninety-Five Theses and the Heidelberg Disputation), the summer of 1518 (between Heidelberg and the meeting in Augsburg with Cardinal Cajetan in October), early 1519 (between the Augsburg meeting and the Leipzig Debate), and the longer period from fall 1519 to summer 1520 (between Leipzig and October 1520 when Luther received news of his threatened excommunication). These four central chapters are preceded by two preparatory chapters, one on Luther’s vocation as a pastor in the context of late medieval, pastoral theology and piety, and a second on Luther’s early academic lectures and his initial criticisms of scholastic theology and church practices—the latter culminating in his Treatise on Indulgences and the Ninety-Five Theses, both sent to Albrecht of Brandenburg at the end of October 1517. A concluding chapter on “Piety and Luther’s Protest” draws on the continuity Johnson finds in Luther’s pastoral writings throughout this period, then demonstrates that in his treatise On Christian Liberty of November 1520, Luther’s concerns for Christ-ian life (true good works as well as freedom from papal rules and false works) are emphasized together with justification by faith.

By this structure of argument, Johnson takes aim at a narrow view of Luther’s “reformatory turn” in its later date (e.g. Bizer, Bayer, and Brecht, dating such a turn to the middle of 1518 or even later), concluding that Luther displays “coherence and consistency” throughout this period in a pastoral theology that is already “highly developed,” and that “over the course of two eventful years with twenty-five pastoral writings on a wide range of practices, the core of Luther’s instruction was remarkably consistent” (183). Thus Luther’s main concerns for the reform of Christianity (not just church reform or reform strictly of doctrine) were already substantially formed at the outset of his conflict with the papal church. As the last lines of the book characterize it, “Luther the pastor was not a kinder, gentler version of Luther the reformer. He was an impassioned reformer who was so committed to the care of souls that he pushed for reform at the risk of excommunication and death. Luther’s attempt to reform Christian practice is not an experiential aside to his theological cause, but rather its heart” (192).

While Luther’s vocation as a pastor has received increased attention in re-cent years, often looked at via his later writings (such as the catechisms) and his personal correspondence, Johnson’s investigation of these early pastoral writings more thoroughly incorporates Luther’s pastoral vocation into the story of his development as a reformer and his break with the papal church. Most of these writings are sermons; others are brief explanations of God’s commandments, the Lord’s Prayer, or on how to confess (the sacrament of penance); while the later published sermons of 1519-20 are more developed treatises analyzing traditional practices and sacraments (preparing to die, penance, the ban, baptism, doing good works, etc.). All of these writings show a pastor at work instructing and consoling his parishioners, and also a broader public, offering correction (often quite critically) over against the traditional and often quite popular practices of the church before the Reformation. Reading them gives a very different impression of Luther the man and the theologian than is gained from reading only Luther’s polemical treatises written during this same time period. Johnson demonstrates that Luther biography as well as histories of the Reformation need to emphasize and more clearly elaborate the practical, pastoral concerns that energized the early Luther and motivated the early reformation movement, which emerged out of his pastoral care as well as his theological and ecclesial protest.

For Lutheran pastors and laypeople, grasping Luther’s pastoral concerns in his early years is vital for understanding the nature of his reform and the resulting Lutheran confession of the gospel, and thus of Lutheran identity and practice today. These early pastoral writings are an important but often neglected body of Luther’s works. Many of them are available in English translation, but without the introductory tools that help readers grasp the integral role they played in Luther’s development. This book provides an excellent introduction.