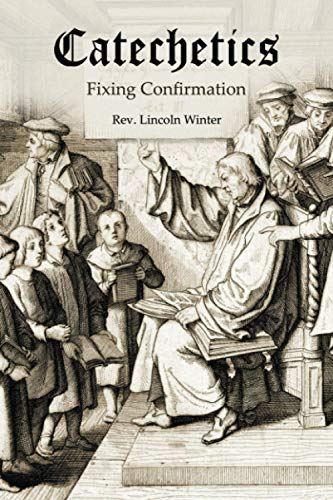 Pastor Winter describes the approach of Martin Luther in his Small and Large Catechisms. He sees this approach as evangelical and prayerful. After the time of Luther, a different, “scholastic” approach emerged, due to the influence of Philip Melanchthon and especially Conrad Dietrich.

This latter approach has been the dominant method in the Lutheran Church since the time of Luther; it is evidenced in the explanations of Luther’s catechism produced by the LCMS. Pastor Winter sees this approach as inferior to that of Luther, and he has some vigorous criticisms of all three enchiridions (1943, 1991, 2017) published by our synod.

The author sees Luther’s approach as being more in line with classical philosophies of education, while he sees the approach of other catechetical programs (including the 2017 enchiridion) as being influenced by more “modern” theories of education. This being the case, he proposes that catechesis should begin earlier than the seventh and eighth grade and should emphasize the study and memorization of Luther’s Small Catechism, with the Large Catechism being a resource for further study. This, he suggests, should prepare the way for the catechumens being admitted to the Lord’s Table at an earlier age, and if there is to be a ceremony recognizing their admission, he recommends that it not be termed confirmation. Further instruction in the faith should follow, continuing not only through the eighth grade but beyond. As for the rite of confirmation itself, Pastor Winter suggests that the church might well do without it. (He notes that although a reformed, “Lutheran” rite of confirmation was put in place during Luther’s lifetime, the reformer himself did not author it, although Luther did produce new rites for Holy Baptism.)

In this work, the author shares his strong opinions about a number of related matters, such as worship, liturgy, lectionaries, and church music. While some will regard his views as “spot on,” many others will find at least some differences with him. These differences might cause one to dismiss the entire work out of hand. That would be a most unhappy development.

Many Lutheran pastors see challenges in the whole matter of catechesis and confirmation. Pastor Winter’s proposals regarding earlier catechesis and earlier admission to the Lord’s Supper than what is practiced in many Lutheran congregations certainly deserve a hearing.

In the last chapter, “Solving the Unsolvable: Challenges to Catechesis,” the author admits that in this life there will be no perfect answer to the challenge of forming Christian faith and practice in our children. Many pastors may, in their situations, deem it impossible to implement the proposals of this book wholesale. Nevertheless, the present work does provide material for a thorough examination of the practice of catechesis (and its relation to confirmation) in one’s parish and for some possible improvements in how this important task of ministry might be carried out.