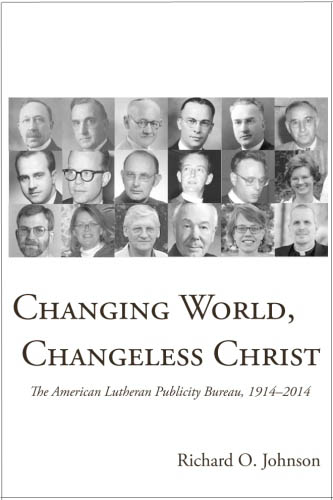 Sooner or later any church has its para-ecclesiastical groups address concerns not addressed through the established channels. The American Lutheran Publicity Bureau (ALPB) was founded when the mostly German speaking Missouri Synod was breaking into the twentieth century. At its founding the ALPB was a voice mostly for East Coast Missourians to get a spot at the table of a chiefly Midwestern synod. In the intervening century, a plea for cultural change evolved into calls for change in theology and practice. Changing World, Changeless Christ provides a fascinating look behind the scenes to see how changes were accelerated.

Frustration with the church status quo gives birth to changes in theology and practice and so the ALPB became a seed bed yielding a diversified harvest. Evangelism, as the ALC’s first goal, morphed into working for Lutheran unity in America. Different ethnic origins were not reasons enough for synodical divisions. This goal came to a dead end with the introduction of biblical higher criticism in the seminaries of what would later become the ELCA and in the LCMS’s St. Louis seminary. The success of a feminist agenda in the ELCA was an inevitable accompaniment of the ordination of women. Concerns with the now downhill doctrinal slide in the ELCA are given full discussion, but in the ALPB history they are really an epilogue to the ALPB’s founding purposes of guiding a confessional Lutheran church with German roots into an English speaking world. At least since the end of the twentieth century the ALPB has worked towards maintaining the classical Lutheran tradition, but nothing will reverse the ELCA from being a quintessential mainline Protestant church. It has aligned itself with nearly every major denomination, all of whom look more to Calvin as their father than to Luther.

Richard O. Johnson pushes the revealed codes link to go behind the scenes of what was happening in the LCMS. Changing World qualifies as a political history, first of the LCMS from the presidency of John Behnken up to that of Jerry Kieschnick, and secondly of the formation of the ELCA. John Tietjen was editor of the ALPB’s Lutheran Forum when he was elected president of Concordia Seminary, Saint Louis. That says something. Reading Changing World is like reading a family history of the LCMS. ELCA figures play a supporting role. What official church publications exclude can be found in Changing World. For me this is was a walk down memory lane. On the book’s cover are photos of those who had major parts in the ALPB: Adolph Meyer, August Bobzin, Ted Wittroch, Dick Koenig, Dick Neuhaus, John Hannah, Paul Hinlickey, and Paul Sauer, all of whom I knew in more than a casual way. Then there were those with short biographies without the photos whom I also knew: Henry A. Dahlen (founder of Lutherland), John Kavash, Rudy Ressmeyer (long time Pocono neighbor), George Matzat, Arthur Brunn, George Schmidt, John Tietjen, and Leonard Klein. I knew that my father was secretary for the ALPB, but not the years 1928–1953. Completely unknown was that my grandfather, Gustav Zimmermann, was a founding ALPB board member.

When the ALPB accommodated the ordination of women, it forfeited its role as an honest broker in American Lutheranism. It has hobbled itself in now being able to oppose same sex marriages and ordination of gays. These are self-placed unmovable obstacles in the ALPB’s work towards a catholic expression of the Reformation faith. Deeds speak louder than words, so consider that such ALPB editorial notables as Richard John Neuhaus, Leonard Klein, and Russel Saltzmann have gone to Rome, thus raising the question of whether in their minds the ELCA was still church and if so, in what sense. (In 1971 Klein wrote a negative review in Lutheran Forum of my Lutheran World Federation Today, a narrative of the LWF convention in Evian 1970. I would like to assume he would be kinder if he wrote it now.) I hesitate to say that any book is a must read, but for Missourians of any stripe, Changing World is. ELCA folks can read how things unraveled for them. Here is stuff not found anywhere else. The Index of Names is a panoramic view of twentieth century Lutheranism in America. Lastly to the title—Changing World, Changeless Christ. With politically correct language in speaking about God taking hold in the ELCA, the Changeless Christ has already changed in how he is spoken of in church liturgy. For some, God replaces Father, and Child replaces Son. Women’s ordination has not been without its creedal consequences. Radical historical criticism afloat in the ELCA is another matter. Even if Jesus did exist, they have no certainty of his place in the past. Any college or seminary course on Lutheran history will want to include, Changing World, Changeless Christ in the required bibliography.