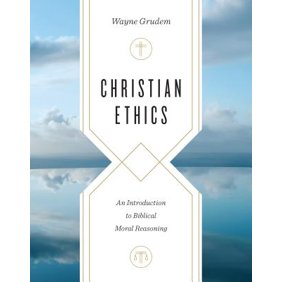 Wayne Grudem, Research Professor of Theology and Biblical Studies at Phoenix Seminary, is no stranger to the field of ethics, having written books previously on political theology and economic ethics. Christian Ethics, however, is his first comprehensive offering in the field, and he covers the material well in this almost one-thousand, three-hundred page tome.

Grudem’s methodological approach is indicated in the subtitle, An Introduction to Biblical Moral Reasoning. When considering ethical questions, Grudem says he has tried to consider every Bible passage that addresses the ethical topic and to draw his conclusions from these passages (37). He spends little time considering philosophical methods of ethics, or even theological ethics, which he defines as beginning with certain theological doctrines and drawing ethical conclusions from these doctrines (rather than every relevant Bible passage). He is critical of tactics that allow broader “principles” to make exceptions from following all the “rules” of Scripture (52–53). He acknowledges the deontological, teleological, and virtue-oriented approaches to ethics, yet because and to the extent that they are taught in the Bible.

The vast majority of the book addresses ethical topics categorized according to the Ten Commandments (numbered according to the Reformed system). He has engaging chapters on many topics, and his scope of biblical references will benefit most readers, reminding them of relevant passages that may not always be remembered. Of particular interest are his chapters on truth-telling (ch. 12), in which he argues convincingly that a Christian never has to lie to prevent a greater sin, and the husband’s headship in marriage (ch. 15). His breadth of biblical knowledge is especially demonstrated in these chapters, which would be an encouraging review for many. Various chapters on economics, wealth, and business (particularly chs. 34, 36, 37, and 40), and the environment (ch. 41) demonstrate the Bible’s concern for personal property, general economic liberty, and environmental stewardship that recognizes the earth’s sustainability under God’s providential care.

Occasionally, Grudem does not consider relevant Bible passages. For example, he omits mention of Leviticus 25:13–17 (the return of landed property in the Year of Jubilee) and consideration of the extent to which this suggests a concern with the vast accumulation of economic assets by a few owners. On some other topics, Grudem surprisingly says little or nothing about significant yet often overlooked matters, such as concerns with hormonal types of birth control, or the problems surrounding in vitro fertilization (IVF). Regarding birth control, he does state that birth control which “would cause the death” of a newly conceived child are impermissible (753). However, Grudem also says that most birth-control pills are acceptable, and he says nothing about other hormonal methods, such as injection, the patch, or various types of implants, even though hormonal methods of birth control may, in some cases, cause the death of a newly conceived child. With respect to IVF, while Grudem does argue it is acceptable only when a small number of eggs is fertilized so that no embryos be destroyed, he does not address other concerns, such as the temptation to fertilize many eggs to avoid costs of successive rounds of treatment, the risk of ovarian hyperstimulation syndrome, or the genetic testing done on IVF embryos which can lead to birth defects or other abnormalities.

Perhaps an introductory book on ethics, even one the size of Grudem’s, cannot be expected to address every facet of the many topics in ethics. But Grudem’s methodology risks setting up the false expectation in the reader that he is addressing every question thoroughly. By claiming to bring every relevant Bible passage to bear in Christian ethics and to apply the teaching prudentially, Grudem is implying that he is being comprehensive in scope. Not every relevant Bible passage is considered; not every facet of application is addressed. In fact, the very nature of ethics as a prudential, circumstantial discipline makes it doubtful that any one work could address the field comprehensively.

That being said, the discerning reader who stays aware of this limitation, can gain much from this volume. While Grudem’s treatment is not comprehensive, it is extensive, and his engagement with many and various Bible passages will benefit readers. Scholars, pastors, and lay people alike can deepen their understanding of issues and be oriented to issues which they can pursue through further study and Grudem provides an extensive bibliography on each topic at the conclusion of each chapter. The book should benefit both those who read it through and also those who use it simply as a reference to be consulted as topics come up.