Confessing the Gospel: A Lutheran Approach to Systematic The...

Confessing the Gospel: A Lutheran Approach to Systematic Theology 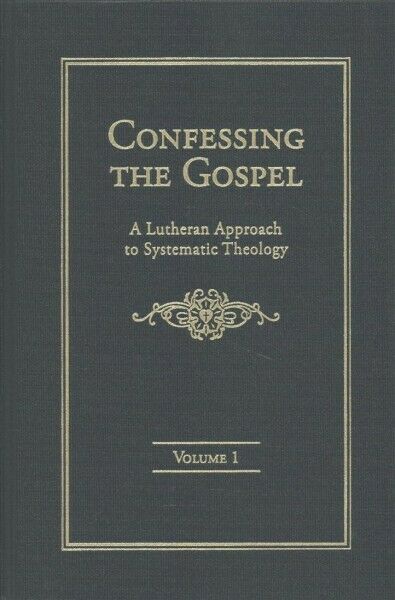 An introduction in the first volume of Confessing the Gospel explains how this two volume dogmatics will follow the building-block approach, a method resembling how encyclopedias are arranged according to topics and then further divided into sub topics each with a different author. The project was initiated by then LCMS president Ralph Bohlmann who, in 1983 in response to several requests, appointed a committee to discuss the feasibility of a new dogmatics to serve the synod (xxv–xxviii). Directing the project from beginning to completion was Samuel F. Nafzger, executive of the LCMS’s Commission on Theology and Church Relations, who was well placed to identify theologians in the LCMS and its sister churches for the task. Thomas Aquinas’s De Summa Theologicae and seventeenth century Lutheran, Reformed and Catholic dogmatics had only one author. More recent dogmatics with one author are Francis Pieper’s Christian Dogmatics and Karl Barth’s monumental Church Dogmatics, both of which are still cited. Since dogmatics are written to address current theological issues, there can be no once and for all dogmatics, though Pieper’s dogmatics continues to represent the doctrinal position of the LCMS. Theology has become so expansive and diverse that the task was considered too large for one person and so was parceled out to about one hundred contributors. Multiple authorship has been used before. To commemorate the LCMS’s centennial, it published The Abiding Word, but its popularly styled articles is not a dogmatics. More recently Fortress Press published Christian Dogmatics, edited by Carl Braaten and Robert Jenson. Each volume in The Confessional Lutheran Dogmatics, first edited by Robert Preus, then John Stephenson and now Gifford Grobien, has one writer for each volume each with one locus or two. Confessing the Gospel lists the major author for each locus into which the contributions of others are added. Editors are responsible for the final form.

Twenty-five writers make the grade as “Primary Loci Contributors” for the fifteen loci or topics and approximately seventy are listed as contributors without identifying to which section they contributed. The 120 page locus on anthropology alone has five major contributors. Robert Kolb writes on baptism and election. From the beginning to the end of the thirty-five year production cycle, decisions were in the hands of Nafzger and the yeoman’s work in polishing up the manuscripts was done by David Lumpp. What amounts to anonymous authorship follows the protocol of LCMS’s Commission on Theology and Church Relations whose opinions originate with one person chosen by the commission and then expanded, abridged and edited by its members. With the Braaten-Jenson Christian Dogmatics and the Preus Confessional Lutheran Dogmatics, readers know the author and can engage him. Respondents to Confessing the Gospel do not know for certain that the major contributor for the locus is responsible for what made it to the printed page.

Each locus follows the prescribed outline of the building block approach: scriptural foundation, confessional witness, systematic formulation, historical and contemporary development and, implications for life and ministry (1:xxix–xxxi). A format of this kind is common in encyclopedias and Die Religion in Geschichte und Gegenwart. The historical and confessional blocks in Confessing the Gospel have a certain scholarly objectivity in summarizing how doctrines were regarded in the past. This comes with the turf. An index prepared for a second edition would enhance these sections. However, dogmatics involve more than historical and confessional theology. Dogmatics are expansive theological treatises in which biblical data, creeds and confessions, church history, contemporary issues and practice are brought together and interwoven into theological topics called a locus. In doing this it challenges views contrary to the Scriptures and the Confessions.

The locus on Christology is as good as any other in seeing how the building block approach works. It is divided into two parts, the first is on the person of Christ (343–418) and the other on the work of Christ (419–622). Sub-sections are provided for the Old and New Testaments, each of which is further divided into sections for some but not all of the biblical books. By themselves such sections in themselves would be regarded as biblical theologies. Here it must be asked if what the Old Testament says about Christ and the New Testament says about Jesus as the Christ can be separated from the task of systematic theology? The section “Historical and Contemporary Developments” (481–513) would have been better subdivided. Historical theology tells us how the church did theology in the past and contemporary theology involves addressing new issues and those that remain unresolved. Without the integration of these topics into one section, the section on systematic theology section reads like a bare bones doctrinal statement lacking extensive theological engagement (459–479).

Christ’s descent into hell, his resurrection, his ascension and session at God’s right hand, and his second coming receive barely one page (467–470). Discussion on the descent makes no reference to 1 Peter 3:18-20, the traditional sedes doctrina. According to the building block arrangement this passage should be placed in the biblical section, but it is not. Hebrews 3:2 is cited with the intent of rejecting the view that a chance to repent is given after death, which is true, but this passage says nothing of the descent. With diverse views on what the descent into hell means, how the Orthodox, Catholic, the Reformed and contemporary theologians interpret it might have been included. This is not an insignificant issue, since the ELCA’s Evangelical Lutheran Worship offers the alternative that Christ went to the dead, a phrase so ambiguous that several interpretations are allowed. This section in Confessing the Gospel grasps the theological theme that the descent into hell has to do with Christ’s conquest of Satan. Well and good, but the argument that it is in “keeping with the analogy of faith” is no substitute for fuller biblical exposition of a phrase in a creed that was already in use in the apostolic era. In a more typical dogmatic, this would have been the locus to engage the Christus Victor theme offered in the last century by Gustaf Aulen and now taken up in the Theology of the Cross. Christ’s descent into hell takes us back to Genesis 3 with the promise that the woman’s seed will crush the serpent’s head The biblical, historical, and contemporary aspects of a doctrine are better presented as a whole than divided.

Critique of Vincent Taylor’s denial of Christ’s death as a propitiation for sin is properly addressed (498–502) and includes a refutation of Gerhard Forde’s view the atonement as only complete “when God succeeds in creating faith, love, and hope” (501). Why then is Forde commended in the Prolegomena (11, n 15)? Forde comes up for discussion for his views on predestination that God is the cause of faith and also apostasy. More precisely the human will is not the cause of apostasy. Divine action takes place in proclamation, a view taken over from Forde (1,256) into the Theology of the Cross. Luther’s theology of the cross, classically articulated in the Heidelberg Disputation finds its way into the prolegomena. If this is a theme that rarely comes later in the Reformer’s theology (10–12), why does it have a place in the section on how theology is done? It is not pointed out that Luther’s version is hardly identical with what has been and is being proposed by Forde, James Nestigen and Steven Paulson.

One cannot expect a unifying theme or a cohesive narrative from a book like Confessing the Gospel which evolved from multiple authors, even for the same sections, and editors. In certain cases one is uncertain on what was intended. Consider this, “What is written in the Scriptures possesses unquestioned authority, authority alongside of and equal to the Words of the incarnate Word of God himself (John 2:22)” (633). Really? What is written in the Scriptures are the very words of the Incarnate Word himself not words alongside of his other words. Why is “Words” in upper case? Is it really so that “after Pentecost, the authoritative writings of the early church were Hebrew Scriptures . . . [or] the Greek translation, the Septuagint” (664)? The oral gospel, what Acts calls “the teaching of the apostles,” took precedence over everything else. Early Christians came together to talk about Jesus (Acts 2:42) and they did this in terms of the Old Testament which was never isolated from what Jesus had done. Defining biblical inspiration not only as a supernatural but also an historical act is appreciated (741). Paul’s epistles were so widely read that they were considered Scriptures and the same can be said for whatever Gospels were in hands of the apostolic churches. The half page on infant faith informs readers that infants do not have “‘conscious faith’ or ‘reflective faith’” (567). There is enough scientific evidence to show that these little ones even before they are born have active intellects. It would help if these, and similar truisms, were biblically demonstrated. The “of course” arguments do not do the job.

Any dogmatics is anchored in time and with a dogmatics that took over thirty-five years from start to finish, some of the major contributors and those of whom they wrote have left the stage. A word of clarification is in order about the origins of Confessing the Gospel in the year 1983 (xxiii). Seeds for this project were sown when Bohlmann and Robert Preus were both still professors on the Saint Louis faculty. The year was no later than 1973. (See my Surviving the Storms, 185–197).Confessing the Gospel was a “go-fund-me” project that would not have made it off the Concordia Publishing House printing presses without a little help from above.

Along with others I will consult Confessing the Gospel from time to time to ascertain what is said to be the synod’s doctrinal position. Sections on creation, God, and Christology were good reading. An index for the second edition would make it better reading. Preparing this review was like having a conversation not knowing with whom one is speaking unless the writer(s) should later come forward and identify themselves. Anonymous multiple authorship is not a new theological phenomenon. For generations, Old Testament scholars have been singling out J-E D-P to identify the origins of the Pentateuch. New Testament scholars do the same in locating the origins of Matthew and Luke in Mark and Q. In similar fashion, Confessing the Gospel brings the LCMS into the guessing game of matching the texts with the contributors.