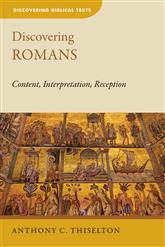 Discovering Romans is the third volume to appear in the Discovering Biblical Texts: Content, Interpretation, Reception series providing “comprehensive, up-to-date and student-friendly introductions to the books of the Bible.” The book’s twenty five chapters are divided between introduction (chapters 1–6, pp.1–66), and commentary (chapters 7–25, pp. 67–263).

Thiselton offers eight brief reasons for studying Romans (1). Most compelling is the transformative influence Romans has had on Christians over the centuries including such giants as Augustine, Martin Luther, and John Wesley. Next, Thiselton briefly summarizes three essential (2) and nine limited-use reading strategies (3). The three essential strategies employed throughout Thiselton’s commentary are historical-critical method(s), rhetorical criticism, and sociological or socio-scientific reading. The nine limited-use strategies are reader-response theory, structuralist exegesis, liberation hermeneutics, existentialist interpretation, pre-critical exegesis, Barthian exegesis, lexical and grammatical exegesis along with text-critical research, social factors such as the shame-honor system and imperial cult, and some form critical techniques. His brief summaries prove helpful for those unfamiliar with these varied approaches. Thiselton then rehearses the reception history of Romans beginning with Marcion and continuing through Augustine to Martin Luther, and to E.P. Sanders and the ‘New Perspective on Paul’ (4). Romans 13:1–7 concerning political authority serves as a single example passage, especially germane in light of recent political developments affecting individual religious liberty and church-state relations (e.g. same-sex marriage). Consideration follows (5) of two significant text-critical issues: Romans 5:1 ‘We have peace’ or ‘Let us have peace;’ and the placement of the doxologies at the end of chapters 14, 15, 16, as well as the overall integrity of Romans. Thiselton concludes these introductory chapters with a brief biography of Paul, noting in particular the ecclesial origin and character of Paul’s ministry and Paul’s call as both a missionary and a pastor (6).

Thiselton divides Romans into nineteen thematic sections, averaging ten to twelve pages of commentary per section, identifying key exegetical issues and terms. Rather than plowing new ground, Thiselton surveys the landscape of current scholarly discussion as well as historical reception in keeping with the overall purpose of the commentary series. One distinctive mark is the correlation he draws between 1 Corinthians and Romans. According to Thiselton, Paul articulates in Romans his mature reflection upon problems initially addressed in 1 Corinthians.

Written for students, the series strikes a balance between the readability of a popular commentary and the scholarliness of a critical commentary. The reader is able to listen in on current scholarly debate on Romans without being intimidated or overwhelmed. Overall, the book is a good primer on Romans and Pauline theology.