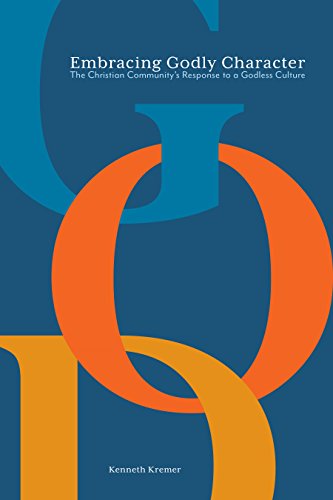 In a relatively short book, Kenneth Kremer articulates some of the problems with secular culture, gives a succinct definition of godly character, and explains how such character exists. Kremer defines character as identity plus performance (in that order) and repeats this definition throughout the book. He contrasts it with a view of character that puts performance first. For him, a person’s identity is given by God (in creating and redeeming the individual) and that is first and foremost in shaping an individual’s character. Kremer stresses the importance of listening to the word of God, letting God shape a person’s identity. Performance follows from a person’s God-given identity.

Kremer’s arguments are helpful in analyzing current trends and explaining how they do not encourage godly character. For example, he offers a helpful chart at the end of his book which compares the fundamental assumptions behind Christian education with the assumptions of an education based on secular humanism. Furthermore, he offers a helpful analysis of the nature and timing of a shift in our culture’s view of God and His Word. Kremer’s analysis is therefore helpful for pastors in understanding their congregations, especially the younger members of those congregations.

Kremer attempts to pack a great deal into a short book and some of his points could use additional development. For example, the chart on education worldviews at the end of his book demonstrates that he could have written a good deal more on the basic assumptions of these different forms of education and how they form character. In addition, near the end of the book, in chapter twelve, Kremer discussed the need for people to communicate with one another through an analysis of the development of the internet. The chapter ended abruptly by raising a number of questions about the importance of having conversation with Jesus, with fellow Christians, and with non-believers. Kremer seems to be touching on an important point, but he could develop it more fully.

Kenneth Kremer offers a book which can be helpful in understanding the background for some cultural trends. It also encourages Christians to listen to the word of God, letting his word shape their identity and their performance for the purpose of having godly character. Kremer’s book will be helpful for pastors to read as they seek to understand the worldviews influencing their people.