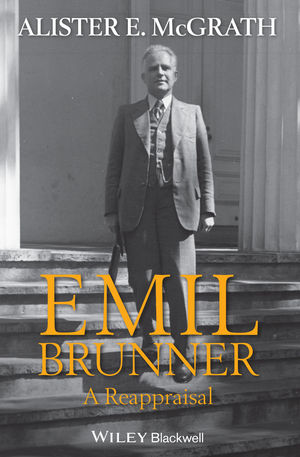 Emil Brunner (1889­–1966) was a Swiss theologian whose contributions are read in the light of and are overshadowed by his more famous contemporary, Karl Barth (1886–1968). In this book, the ever prolific historical theologian, Alister McGrath seeks to gain a new hearing for Brunner, suggesting that his voice will challenge and enrich contemporary theological discourse in several areas including the theology of nature (including natural law), a relational anthropology, and a corrective to current Trinitarian theologies.

While McGrath claims that his book is neither a biographical treatment of Brunner nor a synopsis of his theology, we do learn quite a bit about both from McGrath’s crisp and articulate narrative.  Brunner provided an authentically Swiss perspective in the world of German-speaking theology.  After a brief pastorate in Leutwil, he served in academic posts in England until the outbreak of World War I forced him to return to his native land. His time in England would acquaint him with British theology and social thought.  After military service and another stint as pastor, punctuated also by a visit to the United States in 1919–1920 where he would be exposed to American theology, Brunner went to the University of Zurich in 1924. He would serve here as a Professor of Systematic and Practical Theology until his retirement in 1953. Brunner turned down an invitation to join the faculty at Princeton in 1937, although he did come to the New Jersey seminary as a guest professor in 1938–1939. After World War II, Brunner gave significant lectures in China, Korea, India, and Japan.  In 1953, Brunner went to Japan to where he would serve on the faculty of the newly-established International Christian University in Tokyo, although his appointment would be abbreviated due to his wife’s failing health. On the return voyage to Europe in 1955, Brunner suffered a stroke from which he would never fully recover.  McGrath skillfully demonstrates the significance of these chapters in Brunner’s life for his theological vision. Occasionally, McGrath speculates on how Brunner may have had even more prominence had he come to the United States, arguing that he took American theology with more seriousness than Barth.

Brunner is best known for his opposition to Barth’s rejection of general revelation. In this sense, even though Brunner was a Reformed theologian, he was closer to the Lutheran position. McGrath sees this is a great advantage for contemporary issues such as the dialogue between faith and science and the apologetic tasks.  McGrath is appreciative of Brunner but not uncritical. For example, McGrath asserts that Brunner’s handling of Schleiermacher is somewhat sloppy and one-sided in his 1924 monograph, Die Mystik  und das Wort but disciplines and tightens his critique of the Berlin theologian in his later works. McGrath also observes that Brunner’s reading of the Scriptures could be shallow. It should also be noted that Brunner denied the virgin birth, seeing it as a later doctrinal development which detracted from the true humanity of Christ (45).

Whether or not Emil Brunner has as much relevance for theology today as McGrath contends, he has provided readers with a treatment of a significant theologian from the era of so-called “Neo-Orthodoxy” that is readable and engaging. McGrath’s study sheds significant light not only on Brunner but on others who stood in Barth’s shadow such as Eduard Thurneysen (1888–1974) as well as the theological world of the middle-twentieth century which they inhabited.