Essays: Confessional and Doctrinal and Essays: Historical an...

Essays: Confessional and Doctrinal and Essays: Historical and Historic 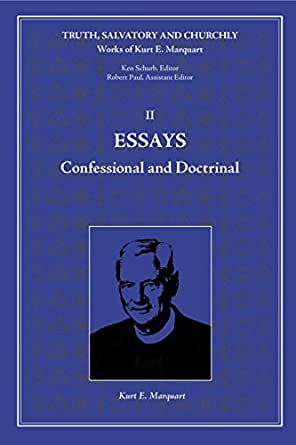 Marquart began defending confessional Lutheran theology in his St. Louis seminary student days in 1954. Until his death in 2006, he was one of the most notable figures in the theological life of the LCMS. Well known is his Anatomy of an Explosion in which he traced the intrusion of neoorthodoxy and higher criticism into the LCMS that led up to the Seminex walkout of St. Louis faculty in 1974. In 1990, Luther Academy published The Church and Her Fellowship, Ministry, and Governance in its Confessional Lutheran Dogmatics series. But some of Marquart’s writings remained unpublished. Ken Schurb, a student of Marquart, and Robert Paul were given access to Marquart’s papers and took to the task of preparing them for publication in the three-volume series Truth, Salvatory and Churchly, also sponsored by Luther Academy.

Volume I appeared under the title The Saving Truth: Doctrine for Laypeople. Now the second and third volumes are available. In the first volume are Marquart’s more formal essays, and the last one offers a potpourri of topics that are as enticing now as when he first wrote it. He had a way with words, to which his colleagues and students can attest. Volume II is arranged according to dogmatic topics with four of the fourteen chapters having to do explicitly with the Lutheran Confessions. Still contemporary is the chapter “The Third Use of the Law as Confessed in the Formula of Concord,” which remains a controverted issue. There are also two chapters on justification. Collected in the third volume are essays in which Marquart addressed ad hoc topics, such as abortion, fellowship with the ELCA, and critique of the theology of the St. Louis seminary faculty, which he prepared shortly before its 1974 walkout. Chapters with such titles as “C. F. W. Walther in Fact and Fiction” and “The Trouble with Task Force Proposals” are invitations that even hesitant readers cannot avoid reading. A bibliography appears in volume III.

Because some time has passed since some essays were written (his letter to the St. Louis seminary dean of students was written nearly seventy years ago), the editors provide introductory explanations so that readers know the situation for which they were written. In volume II, Lawrence R. Rast Jr. writes a foreword, and Schurb provides an introduction on how the editors went about their task. Martin Noland provides a tributary foreword in volume III. A room in Kroemer Library at the seminary is dedicated to Marquart’s memory, where his writings have been set aside for easy reference for students. Luther Academy has done the same task with the publication of these writings.