Faith in the Shadow of a Pandemic

Faith in the Shadow of a Pandemic 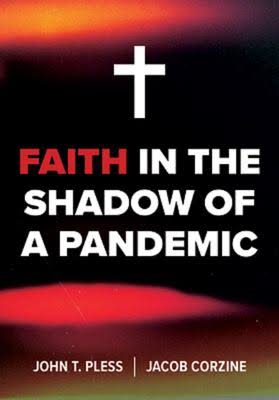 The year 2020 cast a long shadow not just over the world, but also over the church and the lives of many Christians. Faith in Jesus Christ is called for and needs to be strengthened. This short book aims at doing exactly that.

Any assessment of this book is subject to the same, ever-developing contingencies as the pandemic itself, as the authors themselves state: “Writing about something that is still in process with no clear end in sight can be risky” (107).

Accordingly, the authors should above all be thanked for providing the laity, the target audience, with help, comfort, and guidance in such dark times. Professors Pless and Corzine focus on the vocation of Christians and their calling to faith and love. In fourteen chapters, plus an introduction and epilogue, the authors approach the subject from various angles such as comfort and consolation (e.g., chapter 13: “Providence and the Pandemic”), exempla from the history of the church (e.g., chapter 3: “Luther’s Response to the Plague”), and practical advice (e.g., chapter 9: “Stewardship: Generosity vs. Greed”).

Throughout, the readers are led to focus on Christ and his saving work. Chapter 1 introduces the two blind men in Matthew 9:27–31 as positive examples. In the darkness of this world, they cry out: “Lord, have mercy.” Luther called it “hanging on to Christ by a thread” (14). His writing “Whether One May Flee from a Deadly Plague, 1527” is referenced in several instances.

Here are a few examples of how the book gives concrete practical advice: (1) Love for the neighbor has undergone changes recently. Some “neighbors” are not as accessible as before or in a different way. Whom we have as “neighbors” and how we serve them might have changed (chapter 2). (2) In lockdowns or quarantines, when Divine Services are less accessible, the Bible, the Small Catechism, and the hymnody are robust resources that provide stability (chapter 7). An entire chapter is devoted to the use of the Psalter (chapter 10). (3) When greed is rampant, as illustrated by panic buying or profiteering from measures intended to contain the virus, Christians are called to be generous, particularly toward their congregation.

Pless’s comments regarding current Communion practices are especially worthy of emphasis. He warns against “improvising novel ways of trying to gain access to the Lord’s Supper” (52), pointing out Internet consecration and Communion-to-go as examples. He clarifies that such novel practices harm Christian faith and love by casting doubt and dividing the church. These warnings certainly deserve to be heard among confessional Lutherans across the globe, as well. Here in the Independent Evangelical Lutheran Church (Germany), intinction (in different forms) as a practice for the whole congregation has become widespread in the wake of the corona crisis. Individual cups have been introduced in other places, although their usage was virtually unheard of before the crisis. Even during the crisis, Bishop Hans-Jörg Voigt warned against them due to “several theological reasons” (2. Letter to Congregations Regarding a Possible Corona Epidemic).

On the other hand, two central terms used by the authors require further clarification. The term pandemic appears already in the title. However, it is neither defined nor otherwise discussed. That is unfortunate, as the term has a quite technical usage, as defined by the World Health Organization, but at the same time a very emotional force on many people. Unqualified juxtapositions with other vastly more deadly pandemics like the bubonic plague (chapters 1, 3, and 13) should have been contextualized more thoroughly.

Secondly, the book consistently treats the term science as an indisputable monolith. In normal usage, science has at least two meanings. On the one hand, it is used to denote a certain method; on the other, to designate a certain community of individuals and institutions. The book implies that “science” speaks with one voice (chapter 12). However, from a Christian perspective that does not rule out human sinfulness, scientific research cannot be expected to be free from conflicts of interest.

There are consequences to following just one group of pundits and ignoring alternative positions. Masking is rightfully commended as decreasing fears in the short-term in situations like the Divine Service (chapter 5). However, neither the probable negative impacts upon physical as well as mental health are mentioned, nor the possible buildup of a persistent atmosphere of fear and anxiety.

Regarding the prohibition of Divine Services, chapter 5 states: “The Eighth [Commandment] compels us to interpret the actions [of the authorities] in the best possible light” (34). In my view, the question arises as to whether the church of God actually has a divine mandate to refrain from the weekly gathering of the faithful. The reader is left without answer to the question of how the Third and the Fourth Commandments relate to one another in this regard.

In summa: Apart from the above criticisms, the book offers plenty of useful and comforting help and advice for coping with the current crisis. The timely manner in which it has been published is exceptional.