God’s Two Words: Law and Gospel in the Lutheran and Reform...

God’s Two Words: Law and Gospel in the Lutheran and Reformed Traditions

Edited by Jonathan A. Linebaugh 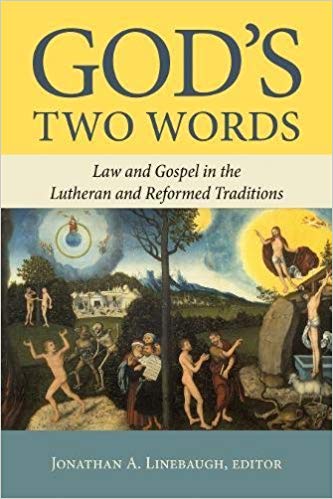 This book is a series of ten essays resulting from a conference of Lutheran and Reformed theologians held in Birmingham, Alabama, July 2016. On the Lutheran side are names familiar to the readers of CTQ: Piotr Malysz, Charles Arand, Steven Paulson, Erik Herrmann, and Mark Mattes. On the Reformed side are names that should be familiar to Reformed readers of current theology: Michael Allen, Scott Swain, Kelly Kapic, Katherine Sonderegger, and Kevin J. Vanhoozer. The editor, Jonathan Linebaugh, who is a Lecturer at Jesus College, University of Cambridge, was responsible for convening the group and supplying a brief introduction.

Due to spatial limitations, it is not possible to summarize here the arguments from every essay included in God’s Two Words. I found interesting whom the authors consider to be authorities for their subject matter. Luther showed up in all the essays, as is fitting for the originator of the Law-Gospel distinction. Surprisingly, C.F.W Walther’s The Proper Distinction between Law and Gospel showed up in some of the Reformed essays. Reformed authors most often cited Zwingli, Calvin, Bullinger, Barth, and Herman Bavinck. Lutheran authors most often cited Luther, Melanchthon, and Werner Elert. Mark Mattes stood out from the rest of the authors by frequently citing the Lutheran Confessions, especially the Formula of Concord, Article Six. If you have limited time to read through this book, I would recommend Mattes’ essay as your first choice.

Behind some of these conversations is the argument between the Lutheran theologian, Werner Elert, and the Reformed theologian, Karl Barth. That argument was about whether the Law or the Gospel is the “end” (i.e., purpose or goal) of God’s ways with men (8–9). In criticizing Barth and Calvin, Elert essentially denied the third use of the Law. Herrmann correctly observes that both Barth and Elert are caricatures of their respective traditions (156). In the footnotes, the reader might see that Edward H. Schroeder, the defender of “Gospel reductionism” in the LCMS, was the translator of Elert’s essay on Law and Gospel (8 n. 36). That essay and Elert’s position on the third use of the Law was influential in the LCMS battles in the 1970s. Though Elert is not quoted by Paulson, the former’s position is expressed by the latter (103–128).

Herrmann, professor at Concordia Seminary, Saint Louis, gets at the roots of the difference between Lutherans and Reformed in the loci of Law and Gospel. Luther’s understanding of Law and Gospel in the life of the Christian came from his personal experience of the baptized believer’s daily struggle with sin, as Paul confesses in Romans 7:7–25 and Augustine explains in his anti-Pelagian writings (165). The Reformed understanding of the centrality of the Law comes from their notion of the covenantal dispensations, which the Swiss found necessary to defend against the Anabaptist heresy (169).

The last essayist, Kevin Vanhoozer, sees the Reformed and Lutheran differences as a difference of ministries, not doctrine (234–238). He even sees reason for communing at the same table (235). I disagree. There are at least seven major doctrinal areas that cannot be resolved without conceding the essence of either doctrinal tradition: 1) the mode of the sacraments—are they Law or Gospel?; 2) the Real Presence at the altar—denied by all the Reformed; 3) the doctrine that the Word and Sacraments are instrumental means—denied by all the Reformed, though affirmed by Calvin early in his career; 4) the doctrine of limited atonement—affirmed by all the Reformed since the Synod of Dort, though denied by Arminians; 5) Stoic determinism in the Reformed doctrine of election; 6) the Reformed notion of “reform” that includes society and the state; and 7) the centrality of the sinner/saint paradox for theology and ministry in the Lutheran tradition.