Humor in the Gospels: A Sourcebook for the Study of Humor in...

Humor in the Gospels: A Sourcebook for the Study of Humor in the New Testament, 1863–2014 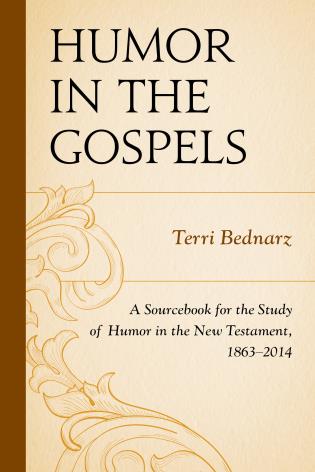 Perceptive readers of the canonical Gospels have long recognized that Jesus can be cuttingly funny—or at least ironic—at times, but upon which particular image of Jesus does the humor depend? Jesus as an eschatological figure? A prophet for the peasants? A magician, charismatic healer, Galilean rabbi, or Cynic philosopher? Most characterizations already possess particular reputations for humor—thus, the biting derision of a Cynic philosopher, the sarcastic irony of a Hebrew prophet, or a shocking story associated with one of the early Jewish rabbis (18). Jesus, of course, has been associated with each of these depictions, and many more besides. Interestingly, early studies of the historical Jesus opened the door to the study of humor in the Gospels: “Without the emphasis on the humanity of Jesus and his historical context, the study of Gospel humor would not have advanced beyond the image of a gentle, smiling Jesus on a sweet-eyed ass” (5). What Bednarz does is situate studies of Gospel humor within a Quest Period schema: (1) First Quest (1778–1906); (2) “No” Quest (1907–1953); (3) Second Quest (1954–1979); (4) Third Quest (1980–2014). Hence, the entire book is a kind of survey of scholarship—in English, German, and French—of humor studies that began just after the American Revolutionary War and continues to just one year before publication. So the book is strong in paraphrasing past scholarship (see Bibliography, 307–323; Index of Authors, 325–330; Index of Subjects, Terms, and Humor Keywords, 331–342) but rather weak, I opine, in explicating the various types of humor that doubtless occur in Gospel pericopes.

The book opened my eyes to the many touches of humor that can epitomize the behavior of Jesus in the four Gospels. A good way in is to consider that Gospel humor is both narrow (or “non-tendentious”) and broad (or “tendentious”). Under the first category (“non-tendentious”) occurs humor that is bantering, paradoxical, incongruous, comically exaggerated, absurd, scatological, ironical, witty, and befuddling (4, Figure 1.1). Under the second category (“tendentious”) occurs humor that consists of derogatory epithets, ridicule, invective, disarming wit, sarcasm, satire, cutting irony, trenchant rejoinders, raillery, derisive caricatures, and acerbic rhetoric (4, Figure 1.1). “Non-tendentious” humor is characterized in biblical literature by sympathetic laughter and smiles; “tendentious” humor is characterized by derisive laughter and sneers. There can be a fine line between the two, or even an admixture of both types. The point seems to be that Jesus’ humor could fall into the first (or second!) category. Thus, Jesus could have smiled when making the riposte “strain at a gnat, swallow a camel”[1] (Matt 23:24–25; on the possibility of Jesus smiling at various times in the Gospel depictions, see 30 n. 5; 50 n. 138; 62 n. 2). On the other hand, laughter—his own and that of his enemies—arguably resulted in the death of Jesus. The earliest hearers of Matthew’s Gospel apparently knew Jesus’ demise would come soon after he delivered the derogatory barbs against the Pharisees in Matthew 23:1–39 (10; see also Jesus the “crucified clown,” 55). Of course, efforts to define humor have been the bane of scholarly endeavors since the days of Cicero (10): “After studying a host of ancient discussions on humor, I [Bednarz] believe that the modern biblical scholar would be wise to avoid the construction of a complex theory of humor” (10).

I was frustrated with this book because, while it deals with a fascinating topic and contains a ton of information (to which I cannot do full justice here), it is not particularly well written and contains many, many lengthy and off-putting endnotes, which impede a reader’s progress through the material. It would be nice if pastors preaching on Gospel pericopes could consult the book to see what humorous aspects are brought to bear in Humor in the Gospels. However, there is no Index Locorum (Index of Passages) contained herein, a fact that greatly lessens its helpfulness. On the other hand, if one already possesses the lay of the land and knows what one is looking for, Bednarz’s book could help process the hundreds of pieces of humor scholarship contained herein and be an essential vade mecum besides. Bednarz has done a lot of helpful spadework here yet fails, I think, actually to deliver the full benefit of humor from the biblical/Gospel texts. As such, I would recommend the book in its current state for graduate students and serious scholars of humor (pun intended!), but probably not parish pastors.

[1] All Scripture quotations are the author’s translation.