Jesus and the Eyewitnesses: The Gospels as Eyewitness Testim...

Jesus and the Eyewitnesses: The Gospels as Eyewitness Testimony (Second Edition) 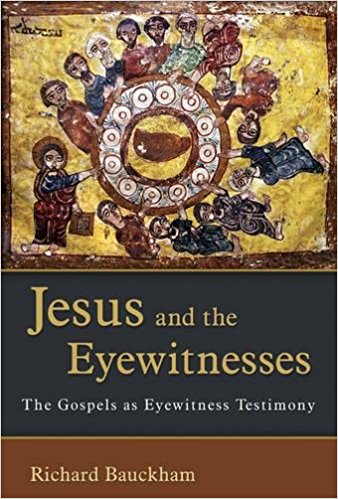 “We worship the Christ of faith, not the Jesus of history.” “The Gospel accounts, written years after the fact, are not reliable historical sources.” “The gospel stories are the result of a kind of Telephone game, in which a story, told and retold, takes on a whole different shape.” “The gospels are a third—sometimes fourth—generation recollection of Jesus’s actual deeds and words.” “People originally thought of Jesus as a good teacher, and only years later did they confess him as Savior, Lord, and God.” These are the stories told in our public universities. They are the tales spun at almost every liberal seminary, and throughout our popular culture. This is the kind of stuff that has made Bart Ehrman not only a minor celebrity, but the favorite New Testament scholar of skeptics and Muslims alike. But it is all wrong.

For those interested in how it really happened, try Richard Bauckham’s Jesus and the Eyewitnesses, now in a second edition. The stories of Jesus were not fabricated out of whole cloth. How could they be? There were too many people who saw and heard him. While the Twelve formed the foundational witness to Christ, the minor characters also played a role. No fiction writer would ever include the bewildering array of women named Mary. But they were present at the death and at the tomb, and that is why they are mentioned. Simon of Cyrene was an eyewitness, and so was Bartimaeus, once he was no longer blind.

In a fascinating turn, Bauckham examines the names in the Gospel accounts, and he does so over and against the names common to Palestine in the ‘30s. He checks the scriptural account and matches it with names found on papyri, including legal and financial documents. Think of our own time. Heather was a popular name in the ‘80s, not so much now. Fashions come and go. So also were certain names found in the inscriptions of the time, not to be found in later decades. Certain name were popular in Palestine, but not in the diaspora.

The second edition is not vital to Bauckham’s overall argument, which remains essentially unchanged. He does, however answer his critics, including an excellent chapter on the “Eyewitnesses in Mark.” Here he revisits the special role of Peter, as well as the minor witnesses, including the women. He also does a splendid job of comparing Mark to other classical works, demonstrating that Mark was not alone in including minor characters as further testimony to the history he records. Bauckham’s additional chapter on the Beloved Disciple, whom he identifies as a Jerusalem disciple other than John the Son of Zebedee, is also fascinating, if not convincing. Perhaps Bauckham could be helped here if he considered an early dating for John. This, however, in no way detracts from the book’s value.

If you already own the first edition, the second is not a necessity. If you do not, buy it now. And, if you have a friend or loved one who has taken Bart Ehrman as scripture, buy a copy for him, too.