John Frederick the Magnanimous: Defender of Martin Luther an...

John Frederick the Magnanimous: Defender of Martin Luther and Hero of the Reformation 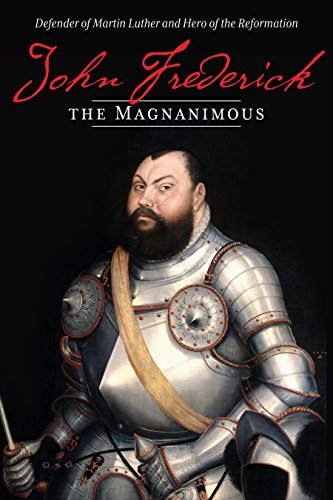 I’m glad that Concordia Publishing House has decided to translate and publish this work.  The original German edition is difficult to access and, of course, takes more time and effort to read than does the English.  This is just volume 1, so I look forward to volumes 2 and 3 that will describe John Frederick’s years as elector and then ex-elector.  This volume gives us his life before the death of his father (1532) as well as an appendix including 27 documents that provide the basis for the information in the text.  However, I am not quite sure for whom CPH has chosen to publish this work other than myself.  The subject is certainly worthwhile.  Like his father (John the Constant) and his uncle (Frederick the Wise) before him, Elector John Frederick had an enormous impact on the course of the Lutheran Reformation and not just in Saxony.  He was a leader in the Schmalkald League as well as ruler of electoral Saxony and just shortly after Luther’s death, he fought—and lost—the Schmalkald War against the emperor, Charles V. Unfortunately, Mentz’s work is not the best for today’s readers.

For one thing, the original is quite old by scholarly standards.  It came out in 1901, well over a century ago.  History books are like most things: they go out of date after a while.  Gradually, historians develop new sources, raise new questions, and provide new information for a particular subject like this one.  For example, in 2006, the Schriften des Vereins für Reformationsgeschichte devoted an entire volume to “John Frederick I—the Lutheran Elector,” a collection of essays by contemporary historians who treat everything from the elector’s role in the Schmalkald League to his pictorial representation by the Cranachs.

Of course, essays are no substitute for a biography but even in this respect, the volume at hand fails, i.e., if the publishers expect anyone to read it.  First of all, the prose is pedestrian (well, okay, so is this review), just one fact laid out after another.  Secondly, it assumes that the reader already knows a lot about the subject and especially his context.  Consider this sentence, “We might wonder why the Hohenzollerns and not the Wettins gained the ascendancy in North Germany” (p. 17). I wonder about how many in 21st century America are still wondering about this?  Indeed, how many prospective readers are going to know who the Hohenzollerns were or the Wettins for that matter (John Frederick’s family) or what is meant by “ascendancy in North Germany”?  And, by the way, this is the first sentence of the first chapter!  Nor is there a footnote in sight to help them.  Likewise, what will prospective readers know about Charles V’s efforts to make his brother King of the Romans or even why that was significant—let alone the nature of John Frederick’s objection based upon the Golden Bull?  Or how about the Pack Affair?  And what about the young prince’s library consisting of works like “the letters of Libanius, the Instruction of Aldus, and the grammar of Brassicanus” (p. 24)?

To be fair, there is the occasional explanatory footnote, but there aren’t enough of them (Libanius, Aldus, and Brassicanus remain unidentified in the text although a little information is provided in the appendix, p. 97) and the notes that we do get aren’t always that helpful.  For example, regarding the Golden Bull, a footnote tells us that it was promulgated in 1356 and specified that “elections were to be handled by the seven electors . . . not by the Roman emperor” but does not tell us what the elections were for or that “the king of the Romans” was a title for the emperor’s designated successor.  We do get a footnote for this statement regarding John Frederick’s books: “a Tristan was purchased for him at Michelmas 1515.” It reads, “Reg. Bb. 4252. The reading is not completely certain” (p. 24).  Now who is that supposed to help?  On the same page, “Parzival” receives a useful identification in a footnote, so why not “Tristan”?

We need a good modern biography of John Frederick, but this isn’t it.  Of course, I certainly hope that there are potential buyers out there for this book.  I really want CPH to succeed in making available hard-to-get and hard-to-read works of Reformation history.  But I’m just not sure how many buyers for this book will also turn out to be readers.