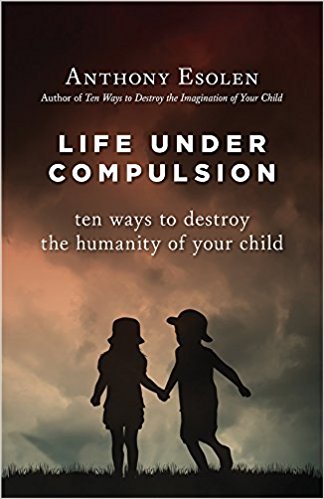 We know the times are changing. Too many of our own people no longer know even the basics of the biblical story. The public schools are increasingly hostile to the Christian faith. Christianity is not only marginalized, but under attack. In such a world, the church does well to think about the future, especially the education of our children, whether in our parochial schools, homeschools, or Sunday schools. One of the great resources for our times is Anthony Esolen, a professor of English at Providence College, and a senior editor at Touchstone: A Journal of Mere Christianity.

Anthony Esolen is not so much an author as he is a guide. Whether he’s taking us along with Huck Finn down the Mississippi, or leading us through Dante’s Inferno, he wakes up the echoes of a long-lost culture and its humanity. By transporting us from the myopia of the present day, we learn to see the world as it really is, to rediscover what is natural, and what it means to be an actual living, breathing human being.

His latest work is centered on the theme of compulsion, the kind of regulated and unnatural life which we thrust upon our children through a school system that is more prison than athenaeum, and through a kind of consumerism that incapacitates the imagination and dulls the senses towards that which is truly good, natural, and real. Theologically speaking, he reintroduces us to the God of creation, and to the natural world that came from his good hand.

There is no doubt that Esolen spends his days teaching. Reading this book feels like sitting in the most invigorating of classrooms. Every point that he makes is illustrated by the great works of the western canon. Shakespeare, Dante, Plato, and Homer show up with some frequency. If you’re rusty on the classics, you won’t be turned off—just the opposite. You’ll be running to dust off the old books, or perhaps to buy some paperbacks used by others. And that’s the point. What’s used is new, and what’s old is surprisingly relevant in a culture that has become uncultured. The way Esolen returns time and again to the Good Book would make his mother proud. And don’t even think to say Esolen is a snob, unless of course, you think that “Little House on the Prairie” is inaccessible, or Norman Rockwell is too highbrow.

Esolen brings to bear all that is good in art, music, and literature to re-inspire the imagination. He reminds us of a time when our children were not driven like dogs by Pavlov’s hourly bell. He makes a strong case that our so-called freedom is only a license that leads paradoxically to enslavement. More than anything, he aims to create within us a taste for goodness. How is it that we have tossed aside great writing for technical gibberish? Why have we given up the faith for an endless series of shibboleths? Reading Esolen, I am reminded of Isaiah’s words, “Why spend money on what is not bread, and your labor on what does not satisfy?” (Isa 55:2).

Virtue and freedom and inseparable friends, Esolen tells us. There is more truth in a mother’s tender love, than in all the isms that would strip from us what is real. More precious than gold is a grandfather idling away the day with his grandson than in all the electronics by which we seek to pacify our children. Yes, the world is bleak, but the answers are at our fingertips. The past is our friend and the poets are our guides to a world that unmasks the gods of this age and that shows the truth of who we were meant to be: human beings, created in God’s image, and for one another. So, let’s dust off the “Good Book,” along with the old books that tell the story of our humanity. And, then add this new book to your reading list.