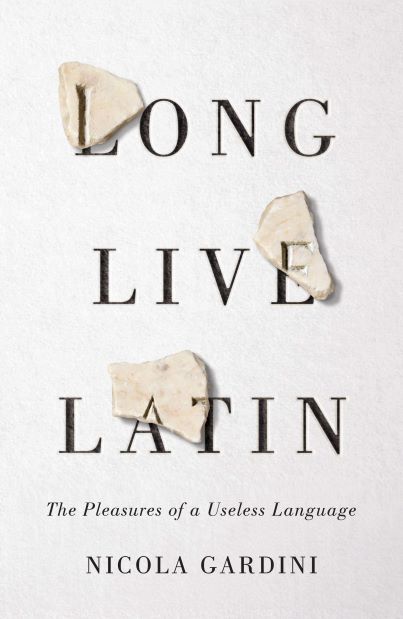 Nicola Gardini is a professor of Italian and Comparative Literature at the University of Oxford and no mean Latinist. He got started in Latin in middle school in 1977 (the very year it was deleted from the required curriculum) and never looked back—excelling in his studies, as he tells us (15), and reading most of the Latin authors on his own. In his opinion, of course, Latin is not useless but rather the quintessence of what it means fully to be alive. Latin is beautiful in its own right and concerned with the larger questions: Who am I? What am I doing here? What is history? What’s it all about? (4). Behind the question “What’s the point of Latin?” rests a violent arrogance—indeed, an assault upon the world’s richness and greatness of the human intellect (6). Not everything can be reduced to utility nor the push of a button. And as for the canard that Latin is a dead language, “as dead as dead can be,” well, the facts speak otherwise. Latin is very much alive in that it endures and produces other languages (the so-called Romance languages!) and other literatures: Dante could not have composed his Divine Comedy without Virgil’s Aeneid, nor Milton his Paradise Lost; Machiavelli could not have produced Discourses on the First Ten Books of Livy without Livy’s history, of course, nor Castiglione his Book of the Courtier without Cicero’s De Oratore (6–7). And so it goes:

Literature is life, and it lives because it generates more writing, and because readers exist, and because interpretation exists, which is a dialogue between thought and the written word, a dialogue between centuries, which halts time on its ruthless march and continually renews our potential for permanence. . . . [L]iterature preserves our capacity for peaceful and respectful relationships, without which nothing else can survive. The name that Latin gives to this capacity is humanitas, and those who possess it humani. Both of these terms, which are derived from homo (human being), appear with great frequency in Cicero. (11–12)

After a few introductory chapters (“Ode to a Useless Language,” “A Home,” “What Is Latin?,” “Which Latin?,” and “A Divine Alphabet”), the book consists mainly of brief essays on Catullus, Cicero, Ennius, Julius Caesar, Lucretius, Virgil, Tacitus and Sallust, Ovid, Livy, Seneca, Apuleius and Petronius, St. Augustine and the Vulgate, Juvenal, Propertius, and Horace—in that order (see Contents, vii–viii). Several of these authors are old friends of mine, and some I have never read before. Gardini engages each in turn—commenting upon a particular word or turn of phrase here, or upon a more extended theme there for which an author is well-known. Take Catullus, for example, whom Gardini discovered pretty much on his own (the teacher had overlooked his poetry because it is written in the hendecasyllabic meter, which the students had not yet learned). Catullus likes swear words and graphic sex, as Gardini learned early in high school (a rundown of the sexual vocabulary associated with body parts occurs on page 90). And yet Catullan sexual expression is not simply immoral, as persons in our holier-than-thou culture might come to assume. In his poetry, Catullus asserts his sexuality as a male human being—that is, as a free-born Roman citizen, affirming his social dignity. In fact, swear words in Catullus are never mere expressions of vulgarity or raw emotion, but—oddly, to our way of thinking—belong to a “strict moral code.” Paradoxically, profanity in Catullus “flows from a pious mouth” (93).

For whom is this book intended? Gardini intends it for young students—perhaps those who need a crash course in the particular styles and themes of a particular author before reading him in the original language (20–21). (Be it noted that only male authors are represented in this volume, though the Greek poetess Sappho is mentioned on page 44.) Nevertheless, the book is intended not just for the young—but maybe, indeed, for former Latin students to “rediscover the pleasure of their longed-for or abandoned studies” (21). In spite of the prurience represented in the preceding paragraph, I think the book would make wonderful reading for Lutheran adults who are considering adding Latin to the curriculum of a “classical” school at their church, or indeed anyone—including pastors—who need to come painlessly to terms with the Latin literature of western civilization. Books like this offer our best hope for staving off the collapse of literacy in modern times, or in schools too given over to STEM learning. Let us allow Gardini to have the final word, who says it best:

Literature, in any language, is rarely ascribed such responsibilities and such dignity today. High school and university programs have withered. Students are reading less and less. As for the good of society, our mental health, the beauty of sentences—as for the education of the spirit, in other words—we no longer seem to give them any thought, betting all our happiness on material wealth. And so our taste decays, along with our expectations. Our words turn anemic, signifying less and less, sounding more and more like white noise, like traffic, or like certain politicians. Words! Our greatest gift, our most fertile ground.