Luther and the Reformation of the Later Middle Ages

Luther and the Reformation of the Later Middle Ages 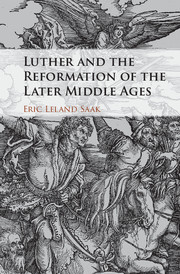 Did you know that there was a reformation before the Reformation? Well, there was and it was characterized by sharp criticism of corrupt clergy, efforts at returning the monastic orders to the ideal of their founders, new forms of lay piety, challenges to papal leadership, and innovations in theology. Martin Luther became an Augustinian hermit and joined the fray. But the medieval reformation failed. Ironically, however, its failure became the catalyst for the Protestant Reformation—a fundamental restructuring of the western Church; and Luther was a part of that, too. This is the argument of Leland Saak’s book.

As simple as that may sound, however, this is not a simple book. It demands a lot of the reader, for Saak not only describes the work of obscure medieval theologians, he also describes the Reformer’s early theology on the basis of obscure sources from the Reformer’s own pen. So, for example, in Chapter 5, Saak offers a brief survey of medieval Augustinians who taught unconditional predestination. They include Alfonsus Vargas, Johannes Zachariae, and (Luther’s contemporary) Konrad Treger—all of them brand new to me and, very likely, unknown to Luther. Among the more challenging sources for Luther’s thinking that Saak depends on are Luther’s marginal notes on several works of Augustine (from the beginning of Luther’s theological studies at Erfurt), similar notes on Lombard’s Sentences (1509/10), and a Christmas Sermon to the Wittenberg Augustinians (1514).

Even more challenging than the sources is the author’s method. For example, in order to understand Luther’s statement, “all Aristotle is to theology as darkness is to light” from his Disputation Against Scholastic Theology (1517), Saak spends about seventy pages reflecting on Luther’s awareness and use of scholastic thinkers in order to show that:

Fundamental structures of Luther’s ways of thought of his mature theology were already present in his earliest theological development. Such structures were derived from an Aristotelian philosophy of the via moderna conditioned by the Augustinian theological tradition as Brother Martin knew it. (196)

As I said, this is not an easy book.

Readers of this journal, however, might find some parts of the work more accessible than the treatment of the “fundamental structures” of Luther’s thought. Saak, for example, has a very interesting chapter on what it meant to call Luther “an Augustinian,” (Ch. 2). Elsewhere (Ch. 3), Saak discusses Luther’s Reformation breakthrough and argues against Martin Brecht and Heiko Oberman on behalf of an early date for Luther’s realization that “the righteousness of God” in Romans 1:17 is the righteousness by which God declares us righteous for the sake of Christ and not the righteousness of good works that He demands from us. This involves a close rereading of Luther’s own description of his experience as well as examining several other texts, but Saak is careful and persuasive. If nothing else, he shows how hard it is to be dogmatic about dating Luther’s tower experience.

An early date for Luther’s theological breakthrough is essential to the first thesis of the book—that Luther discovered passive righteousness, developed his exegetical principles, and began his opposition to the papacy while still being a faithful, obedient Augustinian hermit. Three additional themes follow: (1) to study the early Luther, we need to know late medieval Augustinianism, for Luther really was an Augustinian until at least 1520 (he quit wearing his habit only in 1524); (2) early Luther was a full participant in late medieval reformation; and (3) just as late medieval reform failed so did the 16th century Reformation. Instead, it produced the modern world.

Obviously, this is an ambitious work. It will be of most interest to those who want to make Luther’s connection to scholastic theology and to medieval Augustinianism as precise as possible. For the general reader of Luther and his theology its focus on late medieval scholasticism and the Augustinian Order is probably too narrow. It certainly belongs in theology libraries. For pastors’ libraries, probably not.