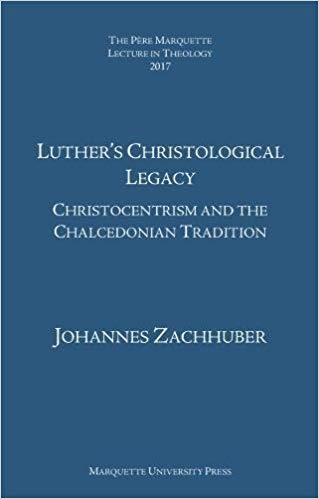 Commemorating the 2017 Reformation anniversary, Marquette University invited Johannes Zachhuber of Oxford to speak on Martin Luther for its annual Père Marquette lecture. Zachhuber, a Lutheran, noted the invitation to speak on Luther at a Jesuit university as a sign of ecumenical progress. In his presentation he frames remembrance of the Reformation as a resource for individuals making religious decisions. As in the Reformation, so today religious identity is more reliant on individual decisions than enculturation (11–17).

If, as Zachhuber argues, Christ’s person is at the heart of all Christianity, and Luther holds his Christology to be Chalcedonian, then a central question of the book arises: how can Luther’s insistence that traditional Christology be at the heart of theology lead to divisions within the church (18–24)? Zachhuber’s answer is carefully nuanced. On the one hand, Zachhuber places Luther within a traditional theological framework. While Luther’s soteriological concern leads him to push against the limits of Christology, this very tension between soteriological proclamation and the technical aspects of Christology is present already in the early church (94). On the other hand, Zachhuber argues that Luther’s emphasis on soteriological concerns results in a cavalier attitude towards the coherence of Christology. In particular, Luther pushes the theopaschite formula further than traditionally done to insist on the reality of God suffering in Christ (51–53). Thus, Luther’s cavalier attitude towards the coherence of Christology leads to divisions within the church as his opponents object to the incoherence they identify in Luther’s Christology (130–137).

Underlying this argument is Zachhuber’s view that doctrinal formulas are attempts to give a rational account of the Christian life that never quite map precisely onto the reality they seek to express (125–137). This view leans toward George Lindbeck’s analysis of an “experiential-expressivist” theory of doctrine in The Nature of Doctrine, according to which doctrines express religious experience rather than propositional truths. While Zachhuber does not neatly fit within Lindbeck’s category, the critical point is that the view of doctrine as a second-order task gives Zachhuber space to argue that Luther upholds soteriological proclamation of Christ aimed to promote the reality of the Christian life at the expense of the subtle technicalities of Christological doctrine. Should one see doctrine as something other than a second-order reflection on Christian experience, then Zachhuber’s proposed gap between soteriological need and technical reflection may shrink accordingly.

The proposed gap might shrink further if Luther’s Christology is placed alongside scholastic Christology. While Zachhuber admirably surveys Luther’s key Christological works and relates Luther to the early church, he gives less attention to Luther’s relationship to the scholastics. Zachhuber predominately argues that Luther rejects scholastic Christologies as too technical for the needs of faith and Christian life. While this position is standard, Zachhuber’s argument might look different if it conversed with recent works, such as Graham White’s Luther as Nominalist and David Luy’s Dominus Mortis, which offer different perspectives on Luther’s relation to the nominalists and his position on the suffering of God. If, as these works suggest, there is greater coherence in Luther’s Christology than Zachhuber grants, then Luther is more successful in reconciling the posited divide between doctrinal precision and the needs of Christian faith and life.

With those observations made, this short book is recommended to pastors working to apply doctrine to life, particularly to work out what it means that Christ and his person are at the center of theology, a place accorded to Christ in the Smalcald Articles and the Augsburg Confession. The centrality of Christ in Luther’s thought analyzed in this book serves as a model for pastors aiming to put Christ in the center of all that they do.