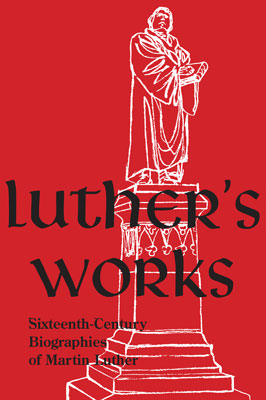 This thick volume presents in English six biographies of Martin Luther
from the sixteenth century, of varying length and disparate genres, and a brief preface authored by Luther himself for a catalog of his writings up to that time, published in 1533. Four of the biographical studies originated in the context of Luther’s death in 1546. The first is the meticulous report on the Reformer’s final weeks and of his deathbed experiences and confession of faith, recorded by Luther’s friend and colleague Justus Jonas and others. There follow the funeral sermon of Luther’s pastor, Johann Bugenhagen, and his colleague Philip Melanchthon’s funeral oration. Next appears Melanchthon’s careful biography of the Reformer, published a few months after Luther’s death as the preface for the second volume of his collected Latin writings; the preface covers Luther’s childhood through his development into a reformer, focusing especially on how God had raised up Luther to counter the “mania for idols” (77) of that age. These shorter works are followed by the unique hymnic biography consisting of sixty-four stanzas by Johann Walter, illuminatingly entitled A New Spiritual Song about the Blessed, Precious, and Highly Gifted Man, Dr. Martin Luther, the Prophet and Apostle of Germany, published in 1564. Finally, making up the vast majority of this large volume (101–612) are the seventeen biographical sermons of a former student of Luther’s, the Joachimsthal preacher Johann Mathesius, that deeply influenced subsequent Luther biography for at least the next two centuries. Mathesius preached these sermons between 1562 and 1564 and they were published shortly after his death, in 1566. Mathesius utilized countless published and manuscript sources as well as his own personal recollections to detail Luther’s upbringing and his career as a reformer and pastor, the leading figure of the Wittenberg Reformation. He celebrates Luther as a German prophet, the “extraordinary man” that the Son of God used “to free us from the abominable kingdom and doctrine of the Antichrist and to rekindle the Gospel . . . and fan it into flame” (4).

Editor Christopher Brown’s extensive introduction (nearly eighty pages) to the volume analyzes each of these primary sources, and highly detailed annotations to the biographies make this book a treasure trove for the scholar. The annotations also provide the more casual reader with the historical background and bibliographical aids for understanding the many personalities, both allies and foes, who interacted with Luther during his influential life. Sometimes these annotations take up more than half the page and they can be a distraction from the narrative of these various biographies, but their inclusion makes the volume tremendously useful. For an account of Luther’s life and influence readers can always take up one or several of the many modern biographies available today, with quite a few of these published recently in the years leading up to the five-hundredth anniversary of the Ninety-Five Theses in 2017. But exploring these historic biographies, with the aid of the annotations, presents Luther as his contemporaries knew and valued him: not just an extraordinary and fascinating man but an instrument of God and even a prophet and apostle, sent to deliver the Church from the idolatry of the papacy and to renew the Gospel for the last days of human history.

Mathesius’s biographical sermons in particular reward the reader with insight into the character of the Reformation as a whole, from the perspective of a pastor living out its legacy under the difficult circumstances of Habsburg rule in Bohemia in the two decades following Luther’s death (1545–1565). While nearly all Luther biographies are at the same time analyses of (and judgments upon) Luther’s Reformation, modern biographers tend to read Luther and the Reformation through the lens of their own contemporary mores and theological frameworks. From Luther’s anti-papal and anti-Sacramentarian polemics to his harsh and sometimes disturbing attacks against the Jews and the Turks (i.e., Islamic society), Luther can be judged along psychoanalytical lines as displaying personality disorders (see Roland Bainton, who laments Luther had not died prior to his harshest polemics against the Jews in the 1540s; Erik Erikson; and more recently Mark Edwards and Lyndal Roper) or faulted even by highly sympathetic biographers (Heinz Schilling, Scott Hendrix) for not more gregariously engaging and winning over his political opponents and especially some of his own wayward disciples. Such analyses of Luther’s personal character stem largely from the modern biographer’s tendency, one could say goal, to explore Luther as a complex and flawed man, and the Reformation as an experience of humanity, a human phenomenon, even a human experiment. Reading these biographies of Luther’s contemporaries, but especially Mathesius’s on account of its length and the author’s personal and pastoral interests in unveiling Luther’s life and work so extensively, results in internalizing the very different but prevailing view of Luther’s time that here was not just a man but an instrument of God, and Luther’s Reformation the battleground between God and His archenemy, Satan. From his preface through each of his sermons on Luther’s life—and even in those sermons devoted more specifically to Luther’s views on fables (Seventh Sermon), the Augsburg Confession (Ninth Sermon), the University of Wittenberg (Sixteenth Sermon), and Luther’s sayings and stories about mining (Seventeenth Sermon)—Mathesius continuously describes Luther as the instrument and apostle of God while his enemies and opponents, from the papal Antichrist to the Sacramentarians to wayward disciples like the fanatic Thomas Münzer and the antinomian Johann Agricola, all alike are but the tools of Satan to destroy and undermine God’s own work through Luther and Luther’s Reformation.

Each of these sixteenth-century biographies of Luther offers the Lutheran pastor and theologian today an opportunity to reflect on the story of the Reformer’s life and work in the ways these were celebrated by Luther’s contemporaries and the generation that followed. It is a very different experience than reading a modern biography, one that deserves to have an impact on preaching, as that event too is most profitably viewed as God at work through His instrument. As Karl Barth observed of Paul in the opening paragraphs of his commentary The Epistle of the Romans, “Fashioned of the same stuff as all other men, a stone differing in no way from other stones, yet in his relation to God—and in this only—he is unique. As an apostle—and only as an apostle—he stands in no organic relationship with human society as it exists in history: seen from the point of view of history, he can be regarded only as an exception, nay, rather, an impossibility.” Luther’s sixteenth-century biographers viewed his exceptionality as the divine intervention of God in human history. Preachers today will preach the Law and the Gospel with the authority of God’s own word as they see their calling in the same light.