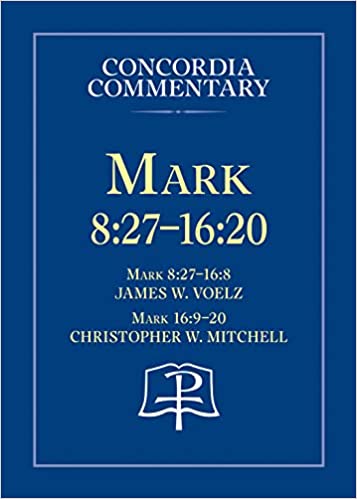 In response to a request to write a review—“with a special focus on the Greek”—on the second volume of Voelz’s commentary on Mark,[1] I read the introduction of the first volume with its exhaustive emphasis on grammar and linguistic features. Voelz helps pastors appreciate such aspects of Marcan Greek as, for example, the so-called “Historical Present,” Asyndeton, Patterning, and Scene Setting.[2] Then there are Major and Minor Characters in the story, Plot Characteristics, and much thinking about the End of Mark’s Gospel.[3] The features reflect a lifetime of engagement with the Second Gospel, and much collaboration with seasoned Mark scholars. It is worth pointing out in this connection that Voelz often heads up the Mark group at annual meetings of the Society of Biblical Literature (hereinafter SBL), where he is a frequent and enthusiastic contributor. On the other hand, one wishes Voelz would forego discussion on grammatical “focus,” which has all the markings of an esoteric debate at SBL.[4] The Concordia Commentary Series, by contrast, is supposed to assist “pastors, missionaries, and teachers of the Scriptures to convey God’s Word with greater clarity, understanding, and faithfulness to the divine intent of the text”;[5] one sometimes feels that Voelz’s preoccupation with syntax and grammar gets the upper hand. Actually, however, Voelz’s preoccupation with grammar represents a great boon: both volumes burst with theological insight culled from unpacking resonances from deep within the text of Mark’s Gospel. Though never having had the pleasure of being enrolled in a class with him, I feel Voelz has been my teacher also as I have used his Fundamental Greek Grammar twice per year to teach incoming Greek students at the seminary since 2006.[6]

I have chosen to examine Voelz’s exegetical treatment of Mark 16:1–8, which features what Voelz and many others believe is the climax of the Gospel: “they were afraid, you know [ἐφοβοῦντο γάρ]” (Mark 16:8, Voelz’s translation). The strangeness of that rendering is tempered somewhat by Voelz’s sense that the Gospel could have been intended from the very beginning to end this way,[7] that there are several biblical and extrabiblical examples that feature “suspended endings,”[8] that ἐφοβοῦντο γάρ is the celebrated conclusion of Mark’s Gospel in Sinaiticus (א) and Vaticanus (B),[9] and that several church fathers—Eusebius, Jerome, Hesychius, Victor of Antioch—assert that the long ending (Mark 16:9–20) was absent from the manuscripts known to them.[10] But what is the significance of the imperfect tense in ἐφοβοῦντο? Voelz’s solution that the voice should rise in oral presentation to “you know” seems insufficient, as well as his (largely undeveloped) suggestion that those hearing/reading the Gospel for the first time may have been facing persecution.[11] This seems likely, but which persecution might it have been? And which textual clues encourage the possibility that such persecution happened within a Roman context? Here Voelz’s commentary falls strangely silent—and frustratingly so for those of us interested in such matters. But even more significantly: does Voelz’s treatment help parish pastors charged to preach our Lord’s resurrection on Easter morning in series B? It kind of does, to be sure. Out of fairness to Voelz, it appears that other commentators also have had trouble processing the jarring abruptness of Mark 16:8.[12]

It plainly is not the case that Mark 16:1–8 lacks a clear witness to Jesus’ resurrection, for there is the young man’s statement in verse 6, “He has risen [ἠγέρθη]. He is not here.”[13] In Voelz’s quirky way of rendering the Greek into English, italicization is supposed to indicate “a non-literalistic rendering of the underlying Greek to reflect the nuances of Greek verb forms or syntax.”[14] But what does this actually mean here, and what is the difference, really, from underlined portions of the translation, which likewise indicate “a non-literalistic rendering of the underlying Greek”?[15] The significance Voelz has painstakingly attached to italicization and underlining apparently blurs together in practice (see the two preceding footnotes), so that it is difficult to know just what (extremely subtle) shades of meaning may be intended here. Likewise, what is the significance of the MT Imprint Shadow font, which I do not see represented in the master list on page 27 of the first volume? Such inconsistencies cause me to wonder if I have overlooked something (which is admittedly possible)—or if, indeed, Voelz’s entire system of using bold, italics, underlines, CAPITALIZATION, and so on is hopelessly overblown. It seems a cruel question, but nevertheless one that should be asked: how much will such sophistication help busy pastors in the field to preach Jesus’ resurrection in Mark’s Gospel? Sometimes a more simplified translation—well backed up by grammatical exegesis, to be sure—is more helpful in the end, and this the already existing commentaries provide.

Returning to that ἠγέρθη of the young man’s Easter proclamation, Voelz argues that the verb has to mean “he has risen,” but not “he has been raised.”[16] This instance of a passive intransitive approaches ἀναστῆναι in meaning (BDAG 7, s.v. ἐγείρω) and corresponds to Jesus’ own linguistic usage in Mark’s Gospel: “after I am raised up [μετὰ τὸ ἐγερθῆναί με]” (14:28 ESV).[17] Voelz wants to emphasize Jesus’ rising “on his own steam,” as it were, and that our Lord “was not raised by someone else or by some other power”[18]—a valid concern.[19] On the other hand, the Scriptures also teach that the efficient cause (causa efficiens) of the resurrection[20] was God the Father’s raising the Son from the dead—for example, “and you killed the Author of life, whom God raised from the dead [ὃν ὁ Θεὸς ἤγειρεν ἐκ νεκρῶν]” (Acts 3:15 ESV).[21] According to Pieper, both series of statements “must be accepted side by side, as they read”[22]—in other words, they should not be played off against one another.[23] Apparently, then, the reason why Voelz emphasizes Jesus’ rising “on his own steam” is to make the crucial point that our Lord Jesus Christ is, himself, “the very God of Israel . . . who has authority over death, . . . including, as we see here, his own.”[24] Still, it is hard to avoid the impression that Voelz has overlooked much of the extra-Marcan resurrection evidence (see the citations listed in footnote 21 above) where God the Father raised Jesus from the dead—using that significant verb ἐγείρω in the active voice (rather than the passive intransitive). The point should be that ἐγείρω and ἀνίστημι are the two principle verbs driving the doctrine of the resurrection of Jesus in the apostolic kerygma—and both are well-represented in Mark’s Gospel in suggestive contexts[25] even prior to 16:8 where Voelz believes the Gospel ends.

Regarding the last point, there has been a spate of caustic articles in a certain unofficial periodical excoriating Voelz and Mitchell’s Mark 8:27–16:20[26]—most of which safely can be sidestepped here.[27] I was all set to abide by Voelz’s rejection of the Longer Ending (hereinafter LE, referring to Mark 16:9–20) until happening upon an article by a formidable scholar of a different faith tradition who makes several compelling points in favor of keeping the LE—such as, for example, that there were witnesses prior to Eusebius (ca. AD 260–340)[28] who apparently had no problems with the LE:

If we had only the evidence from this period [the so-called Emergence Period, from the Writing of Mark to ca. AD 300] we would hardly have any inkling of controversy over the text of Mark, but would assume the Traditional Ending as the undisputed conclusion of the second Gospel.[29]

In his Excursus 19 (“A Consideration of the ‘Long Ending’ of Mark: 16:9–20”), Voelz grapples most extensively with Burgon’s The Last Twelve Verses of the Gospel according to S. Mark, written in 1871;[30] still, some much more recent champions of the LE exist that Voelz does not consider at all[31] nor significantly[32]—simply because their contributions depend upon the work and argumentation of Burgon. Certainly, Voelz cannot be expected to tilt at every windmill. Still, let us consider briefly Voelz’s principle reasons for rejecting Burgon’s acceptance of the LE. First, to reject Vaticanus (B) (and its chief ally Sinaiticus [א]) is to reject the understanding of the Greek profile of Mark that Voelz carefully lays out in the introductory pages of volume I[33]—an argument from grammar, surely, but one that begs the question and is difficult to substantiate at every point. Second, there is the literary factor: Burgon and those committed to the LE treat the Second Gospel as a “simple historical record” of the life, death, resurrection, and ascension of Jesus,[34] but Voelz argues that Mark is so much more. It is a “dramatic presentation of the person and work of Jesus and, especially, of the surety of the promises of his Word.”[35] Yes, the LE does add additional information, to be sure: “But Mark is not interested in ‘additional information.’ With his Gospel narrative he is interested in impact and appeal.”[36] It bears emphasizing, moreover, that Mark’s Gospel does not hide the resurrection (as part of a “secrecy motif”), as is popularly assumed, but calls attention to it on three separate occasions, and from the very mouth of Jesus himself.[37] Voelz pays particular attention to this often overlooked material in Excursus 12: “The Three Passion and Resurrection Predictions in the Gospel of Mark.”[38]

If the LE was not written by the evangelist who wrote canonical Mark (i.e., Mark 1:1–16:8), then by whom could the LE have been written? On this crucial point, neither Voelz nor Mitchell are forthcoming so far as I can tell—and it would have been helpful for Voelz at least to have “weighed in” on this matter. Mitchell recognizes that throughout most of church history the majority of Christians have considered the Gospel of Mark to conclude with the twelve verses comprising 16:9–20.[39] The clarity and concision of the statement on Baptism (translated: “The one who has believed and has been baptized will be saved, but the one who has disbelieved will be damned” [Mark 16:16]) has led to its frequent citation in the Lutheran Confessions and especially Luther’s Small Catechism.

[4] For example, “According to this analysis, the use of the aorist stem allows the writer or speaker to focus—from his own standpoint—upon a given activity (including what someone did, does, is to do, etc.). The present stem, by contrast, allows that same author to focus upon (a perceived) relationship or connection between the activity and the doer, and to depict it as part of that doer, or to depict that doer as intimately involved with or concerned with the action” (Voelz, Mark 1:1–8:26, 29; original emphases).

[7] “[T]he answer of the Second Gospel is this: ‘It was ever thus. If you had been there, it would not have been any easier than it is today. The evidence would have been ambiguous, even with your Lord. What you have is what the disciples and the women had, also on that Easter morning: you have the promise of his Word, a Word that is ever sure’” (Voelz, Mark 1:1–8:26, 61).

[31] In addition to Riddle, “The Ending of Mark as a Canonical Crisis,” passim, there is especially Nicholas P. Lunn, The Original Ending of Mark: A New Case for the Authenticity of Mark 16:9–20 (Eugene: Pickwick Publications, 2014).