Martin Luther and the Enduring Word of God: The Wittenberg S...

Martin Luther and the Enduring Word of God: The Wittenberg School and Its Scripture-Centered Proclamation 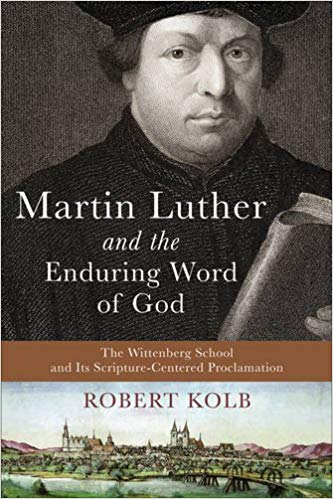 Robert Kolb is the American master of all things Lutheran in the 16th century, the unofficial “dean” of Luther studies. In this volume he sets forth a comprehensive look at the biblical exegesis of Luther, his Wittenberg colleagues, and their 16th-century heirs, leading up to the 1580 Book of Concord. Kolb intends his book to be a bibliographical guide to a genre of theological literature that has been neglected: biblical commentaries and sermons by people other than Luther. The book also focuses on the theology set forth in these writings.

Chapter 1 deals with pre-reformation exegesis. Chapters 2–7 handle Luther’s theology, view of the Bible, hermeneutics, Bible commentaries, preaching, and German translation of the Bible. Kolb busts some myths. The change from medieval to Lutheran exegesis did not mean the rejection of allegory; instead, allegory served to illustrate, though not to prove doctrine. Lutherans saw New Testament exegesis of the Old Testament as instructive for their own, and so types of Christ and His Church were identified even where the New Testament did not explicitly identify them, such as Abraham’s sacrifice of Isaac. All preachers (and homiletics students) should read pp. 185–191, on Luther’s preaching advice.

The rest of the book (ch. 8–14) is about the understudied theologians who worked alongside or in collaboration with Luther, and the next generation that had learned from Luther and Melanchthon. In my estimation, these chapters are the best in the book and cannot be found anywhere else. Exegetes of the late Reformation preserved and also extended the exegetical heritage they had received from the Reformers.

Throughout the book, Kolb repeats certain assertions that function as recurring themes of the book. Luther stood at the center of the “Wittenberg team;” antitheses between his theology and that of his circle have been exaggerated in the past century. Luther’s exegesis did not undergo a Reformation breakthrough; it changed gradually throughout the 1510s (34). Yet there was a Reformation turn, and it was a turn away from ritualistic religion to a religion of God’s Word and trust in it, a conversation between God and his human creatures (37–39). Luther conceived of salvation as “re-creation” brought about by the Word of God. The Word comes to human beings in various forms, and when Kolb speaks of the sacraments, he normally calls them “sacramental forms of the Word.” The law is God’s constant plan and will for human life, not just a word of accusation. Kolb asserts in a few places that for Luther, Christ made atonement by his death, but not by his active obedience to God’s Law (e.g., 444–45). (How this assertion fits with contrary statements of Luther, such as LW 68:39–40, Kolb does not explain here.)

No book can cover every detail. What I would have liked to see, but did not, was more detail on Luther’s hermeneutics. For example, how were Melanchthon’s four rhetorical categories (257, 259) used in exegesis and preaching? Often when Kolb sets forth to describe hermeneutics, he instead summarizes the theology of Luther and other exegetes (e.g., 98–131, 195–207). This, as a rule of faith, was one aspect of hermeneutics, to be sure. But I would have appreciated more detail on how the rule of faith actually controlled and guided exegesis as a hermeneutic.

Yet not even a book this size can be comprehensive, and Kolb’s goal was not to be exhaustive, but to show us what is out there. What he accomplished is astounding. The hope is that future generations will search out the buried treasures of Lutheran exegesis in the 16th century, for which Kolb has given us an excellent map.