Mimesis in the Johannine Literature

Mimesis in the Johannine Literature 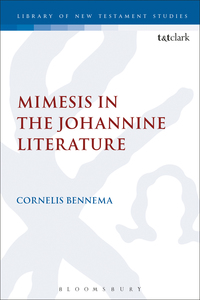 Recent academic scholarship on the Gospel of John has been hesitant, even resistant, to the idea that this Gospel has an ethic, that is, that this Gospel gives an account of a way or manner of life that is true to the human project as such. One significant reason for this understanding of John’s Gospel has been the common view that John’s Gospel arises from an early Christian sect, something like the Qumran sect, which is withdrawn from the world of men and lives according to a special “ethic” true to its own unique and special community. Fortunately, that view is giving way to a more realistic and historically factual interpretation of John’s Gospel as central to the Christian movement, albeit of a different articulation than that, say, of Paul.

Within this context, Mimesis by Cornelis Bennema comes as a very welcome book indeed. It is Bennema’s contention that his book is the first full study of the concept of “imitation” in Johannine studies. He begins with a survey of recent studies on the ethics of John’s Gospel and of a renewal of interest in the subject (1–22). Yet, the specific idea of “imitation” has been lacking, and it is Bennema’s intention to make good this deficit. Indeed, “imitation” is a pervasive theme in the Johannine literature, claims the author (23). Concluding his introduction on previous and contemporary studies on ethics in John, Bennema gives his own working definition of imitation: “person B represents or emulates person A in activity or state X [in order to become like person A]” (25). Bennema explains the brackets: “this relates to the believer—Jesus and believer—God mimesis . . . rather than the divine Son—Father mimesis.” He continues: “In relation to the believer—Jesus mimesis, for example, Jesus (person A) functions as a virtuous role model who sets the example (activity or state X) for the believer (person B) to imitate in order to become like him (person A)” (25–26). Thus, mimesis “consists of creative, cognitive, volitional actions for which a person is responsible rather than a mindless cloning for which one might not be held accountable” (21).

The strength of Bennema’s book lies in his second chapter in which he, with admirable thoroughness, identifies and analyzes the various “mimetic expressions” in the Johannine literature. His statistical summary of these expressions, with corresponding charts, is helpful, as is his distinction between “performative” and “existential” mimetic expressions and his evaluation of the “mimetic strength” each expression possesses. By “performative,” Bennema means those expressions that correlate one action in view of another (e.g., John 15:9: “As the Father has loved me, also I have loved you”). By “existential,” he means those actions that correspond to a state of being (John 17:11: “That they might be one as we”). Other chapters discuss more specifically the “divine mimesis” (Son—Father), the “believer—Jesus/God mimesis” (the longest chapter because this mimesis is the most common in the Gospel), the place of mimesis in Johannine ethics (central and based on the dynamics of “family ethics”), and “mimetic empowerment” (“relational empowerment,” “mnemonic empowerment,” and “the Spirit”).

There is much to learn from Bennema’s linguistic analysis, and, no doubt, the idea of mimesis is not an easy one to conceptualize, let alone that of what motivates one toward imitation. However, there are very serious weaknesses in Bennema’s presentation. I will mention two that are methodological and one that is theological.

First, it is true that the idea of mimesis is not a uniquely Christian idea. Yet, it is quite questionable whether a general idea of mimesis suffices to interpret John’s discourse of the Son imitating the Father and the believer imitating Jesus. Thus, Bennema treats Johannine mimesis as though it is merely another instance of common human psychological and volitional action. Thus, in discussing the claim that mimesis is an event arising of memory as empowerment, Bennema adduces modern theory of human memory. Conclusion: “Many of the events recorded in John’s Gospel are emotionally and sensory-charged incidents that would have forged personal event memories in the minds of the disciples” (182). One need not deny that apostolic memory was human in every way, but would the evangelist admit that such memory was open to psychological analysis? One may well doubt it.

Another example: In his discussion of the place of mimesis in Johannine ethics, Bennema adduces Aristotle’s ethics as “an heuristic framework for understanding Johannine ethics” (144–147).[1] He notes that for Aristotle “happiness” (εὐδαιμονία) is the goal of human life and is acquired through virtue and discipline. When, then, Bennema claims that “in the Johannine literature, ζωή is the closest equivalent to εὐδαιμονία so that, for John, the ultimate end (τέλος) people should pursue for nothing but its own sake is ζωή” (144), one can only wonder where Jesus has gone, who claims that he is the way, the truth, and the life. To be sure, Bennema affirms that “there is ζωή in Jesus” and that he “makes it available to people,” but the very language distinguishes between “life” and the person of Jesus.[2] That is a serious christological problem. The conclusion: “In sum, when we look at the Johannine writings through the lens of Graeco-Roman virtue ethics, we see that ζωή is the Johannine equivalent of εὐδαιμονία” (147). Johannine Christology has disappeared.

Second, the latter point leads to another observation. It is remarkable that a study on mimesis (which I agree is central to John’s Gospel) never appeals to Old Testament narrative, most especially the Torah and its repeated exhortation to obey God’s commandments as the virtual definition of Israel as God’s people. Some mention of Psalm 119 (LXX Psalm 118), a long hymn concerning the law, might have been of interest in such a study as this.

Third, the major weakness of Bennema’s presentation lies in its implicit trinitarian and christological ideas. These are not affirmed explicitly, but they arise from the definition and understanding Bennema adopts for mimesis. Frankly, the problems in this are pervasive. I will refer to only one instance, but one repeated often. Generally put, Bennema’s notion of mimesis relates the Father and the Son/Jesus as external to each other, and the same external relation also of the believer and Jesus. Even when Bennema discusses “existential mimesis,” there is a constant slide from the “existential” to the “relational.” For example: “The expression ‘person A being “in” person B’ indicates closeness of relationship rather than that person A exists or resides physically in person B” (129; this is a discussion of John 17:21).[3]

The problem of externality becomes especially acute in Bennema’s discussion of John 5:19. The question is, how does mimesis between the Son and the Father occur? Here Bennema speaks of a “dualistic worldview” or “two spatial locations.” The Father resides in heaven, and so “this must be the place where he operates and shows everything to the Son.” But the Son is on the earth, so “how is Jesus on earth able to observe the Father’s actions and hear the Father’s words in heaven? The answer lies in the uniqueness of the incarnation.” Bennema mentions one possibility only to discard it as inferior: The one who came to earth and took on humanity is “in the unique position” to tell what he has seen and heard. “This could suggest that prior to his incarnation, the Father showed the blueprint of work to the Son, who subsequently carried it out on earth” (73). How such an understanding can possibly do justice to the trinitarian confession of the Nicene Creed, one cannot imagine. But the accepted solution is not good either: “Jesus on earth has a continuous access to heaven, so is in constant communication with his heavenly Father, and that this dynamic is realized by means of the Spirit” (75, also 76–77). Here Jesus is depicted as a visionary. What he is not, nor can be, is the eternal Word of God in person. As we noted above, Bennema’s definition of mimesis includes that which is cognitive and volitional. When such notions, understood in human terms, are applied to God, this is the result: “The Spirit would be expected to provide Jesus specifically with revelatory wisdom and knowledge to carry out his messianic ministry. This would include being informed about the Father’s work, which Jesus will then carry out on earth” (76). We have here an adoptionistic Christology in modern form that, in turn, renders trinitarian thinking into a mere heavenly classroom.

To his credit, Bennema seems aware that his talk of “participation” and “relation” is very imperfectly related. For further research, he mentions “the relationship between mimesis and theosis,” that is, how it is that believers “do not only imitate Jesus’ example but also his very being” (204). I hope that he undertakes the project. But if he does, he might wish to consider whether patristic reflection on the hypostatic oneness of the man Jesus with the divine Son, and, in turn, the essential and natural unity of the Son and the Father are not worthy of his study rather than Aristotle and modern psychologists. Might I suggest he start by reading the Commentary on the Gospel of John by Cyril of Alexandria.

[1] To be sure, Bennema does not claim that John intentionally draws on Greco Roman morality (144).

[3] One sees in this quotation the ontological division Bennema is making between the physical and the spiritual. That division has been the christological “bugbear” for all “low” christologies and pervades Bennema’s whole argumentation.