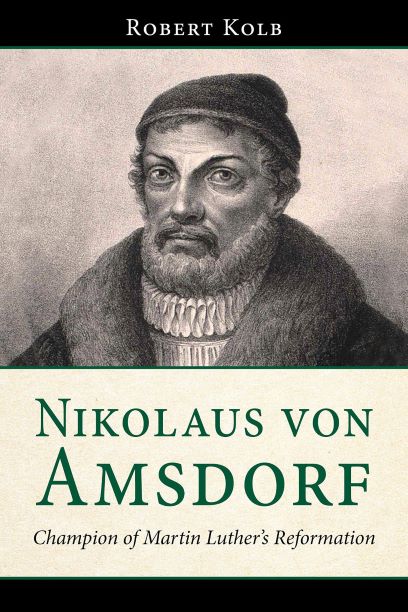 With the publication of Robert Kolb’s Nikolaus von Amsdorf: Champion of Martin Luther’s Reformation, Concordia Publishing House adds yet another significant biography to its impressive collection on Reformation figures. Amsdorf, who was a member of Dr. Martin Luther’s inner circle at Wittenberg, is an important addition, and Kolb, considered the dean of Reformation scholars in North America, is certainly the best person for the task.

Kolb has been working with Amsdorf for more than fifty years. The book, a reworking of his thesis originally published in 1978, is four chapters long, including an introduction that is especially helpful for those who are either unfamiliar with or have forgotten this colleague and friend of Luther’s. Amsdorf, who was a nobleman, was born three weeks after Luther and outlived the reformer by almost two decades. He is credited in part with saving Luther’s Reformation legacy.

The first chapter tells the story of Amsdorf’s life as student, as professor, and later as church superintendent and bishop. Amsdorf, who was already at the University of Wittenberg when Luther arrived, became convinced of Luther’s theology and teaching before the posting of the Ninety-Five Theses. He was a gifted pastor who had the ability to make clear to common people the gospel and the new evangelical teaching coming out of Wittenberg. He would eventually be called to establish the Reformation in the important city of Magdeburg.

The other three chapters focus in on the controversies over original sin, freedom of the will, justification, good works, third use of the law, election, and adiaphora, especially as they developed between the Gnesio-Lutheran and Philippist parties. (These two parties are briefly described in the introduction.) Later, in what are specifically known as the Adiaphoristic, Majoristic, and Synergistic Controversies, Amsdorf presented and defended Luther’s teaching in the Formula of Concord. This places him among the orthodox theologians who staunchly sought to preserve Luther’s theology and Reformation.

Luther once praised Amsdorf’s preaching, describing him as a natural theologian. But it was after Luther’s death that he really shined. Kolb concludes that although Amsdorf was not the genius Luther was, he was key in preserving Luther’s message of salvation by grace through faith in Jesus Christ, and that he remained constant in that confession.

As a biography of one of the Wittenberg reformers, and because of his defense of the gospel and involvement in the later controversies, this book on Amsdorf’s life is both interesting and helpful to pastors, who are often called to be faithful in the midst of controversy. The book is also highly recommended as a closer look at the controversies that resulted in the Formula of Concord. It is further recommended to the interested reader of the Reformation.