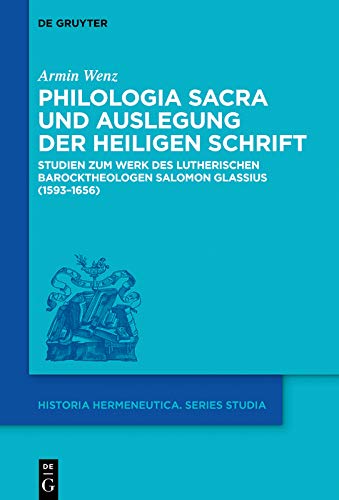 In this thorough and instructive monograph, Armin Wenz examines and analyzes the works of Salomon Glassius and demonstrates his enduring contributions to the field of biblical hermeneutics. The book is the fruit of Wenz’s decade-long research project under Johann Anselm Steiger in Hamburg and presents Glassius as a premier representative of the Lutheran exegetical tradition in the early modern age. This work also establishes Wenz, the newly appointed professor of New Testament at the Lutherische Theologische Hochschule in Oberursel, Germany, as one of the world’s leading scholars on Glassius and biblical hermeneutics in the age of othodoxy. Glassius’s greatest contribution to Lutheran hermeneutics, and the central text in Wenz’s investigation, is his multi-volume work Philologia Sacra (1623–1636). These volumes served as the Lutheran Church’s standard text for biblical hermeneutics until the late eighteenth century. Beyond the surviving copies of his Philologia Sacra, Glassius’s influence on the Lutheran Church—Missouri Synod came by means of the Kurfürstenbibel or Weimarisches Bibelwerk (1641), which was published in St. Louis into the early twentieth century. The Bible included Glassius’s editorial additions to each chapter of Holy Scripture and his instruction for biblical interpretation in the Bible’s preface. Based on Paul’s words to Timothy (2 Tim 3:14–17), Glassius’s preface set out a clear doctrine of Holy Scripture and provided them with keys to using and applying Scripture “for teaching, for reproof, for correction, and for training in righteousness.”

Wenz’s work stands in stark contrast to modern approaches to biblical interpretation from post-Enlightenment interpreters. Generally, modern interpreters tend to fall into two common errors. Either one divests Scripture of its authority by casting doubt on its divine authorship (historical-critical), or else, in response to higher criticism, one subjects Scripture in equally rationalistic ways to proofs that demonstrate little more than the Bible’s historical or doctrinal correctness. As Wenz contends in this work, both tendencies miss the true aim of Scripture, which is to bring salvation in Christ to the fallen human race. Although LCMS pastors may not be easily taken in by higher criticism, they should be aware that the latter tendency to limit our interpretation of the Bible down to the dogmatic assertion of inerrancy and the correctness of its historical facticity is, in light of this study, not Lutheran-Orthodox, but a by-product of Enlightenment thinking. Wenz argues that Glassius avoids both of these extremes by teaching the clarity of the sensus literalis to establish divinely revealed doctrine, on the one hand, and the complexity or polyvalence of the sensus mysticus to illustrate the doctrine through allegories, types, and parables on the other. In Glassius’s writings one finds a highly developed academic discipline for interpreting Scripture. But it is not academic philology as a theoretical science. In him, Wenz argues, all the major disciplines of theology come together for the interpretive task with the practical aim to care for and save souls.

Perhaps an initial challenge to modern Lutherans is Glassius’s teaching that both the literal and mystical sense are rightly understood as the Holy Spirit’s intention. He taught that the distinction between the literal and mystical sense is necessary, since the words in many passages (verba) are not identical to the subject matter (res) or the Holy Spirit’s intention. According to Wenz (chapter five), Glassius’s easily misconstrued statement that “the sense of Holy Scripture is twofold [sensus duplex est], literal and spiritual or mystical” was, in fact, his attempt to find a middle way between the extreme positions of the Calvinists on the one hand and the Roman Catholics on the other. The Calvinist interpreters, according to Wenz, asserted that there is one literal sense in every passage of Scripture, and thus the mystical sense could be little more than an application or accommodation of each literal sense. In other words, the mystical sense is never the intended sense of Holy Spirit, but is an application of the preacher drawn from the literal sense. On the other side, the Roman Catholic interpreters maintained that every biblical text has various meanings or senses, which constantly leaves in question the clarity and sufficiency of Scripture. Wenz shows that for Glassius not every passage of Scripture has a mystical sense, as Rome argued; rather Scripture itself reveals which passages should be interpreted mystically, since the significance in certain passages is not found in the words, but in the signified thing (205–207). Wenz demonstrates how Glassius’s precise treatment of the biblical text leads to a greater confidence in the Bible’s clarity, efficacy, and sufficiency. The book is divided into eight chapters of varying length. The longest chapters are chapters six and seven, which cover Glassius’s exegetical works and his homiletical-pastoral application of Scripture (pages 251–405 and 407–762, respectively).

Chapter one offers readers an analysis of Glassius’s life and work and includes a helpful overview of the current literature on Glassius. Wenz makes a convincing case for Glassius as a premier theologian in whom academic excellence, philological exactness, and dogmatic clarity are beautifully blended with pastoral care and a refined homiletical craft. In chapter two, Wenz describes Glassius’s approach to theology as “sacred philology” and the use of figurative interpretation as a form of devotional literature. Wenz draws on Glassius’s devotional book Arbor vitae (Tree of Life, 1629) to argue that theology as sacred philology corresponds with the aim and goal of Scripture as “the self-mediation of God in Christ through the Spirit, in that theology intellectually and artistically lays hold of this self-mediation in its fullness and then holds it forth again and again [in preaching]” (72). Chapter three examines Glassius’s doctrine of Holy Scripture and its implications for faithful interpretation in accord with the analogia fidei. Wenz shows how Glassius taught the authority and many characteristics of Scripture not as a wooden doctrine, but to draw out the proper relationship between Scripture and the church’s proclamation through the divinely established office of preaching. “The principle,” writes Wenz, “that Scripture interprets itself is not a ‘self-mechanized interpretation,’ since God Himself in Scripture gives to the preaching office the ministerial function of interpreting the Holy Scriptures by means of proclamation” (108–109). Chapter four describes Glassius’s philological analysis of Scripture according to its own style, sacred grammar and sacred rhetoric. Chapter five is where Wenz takes up the important distinction between the literal and mystical sense of Scripture.

In chapter six, Wenz explores Glassius’s exegetical works and demonstrates how Glassius’s rules (canones) of biblical interpretation established an academic discipline in its own right that would lay the groundwork for the rhetorical application (rhetorica sacra) of the biblical text in the sermon. Glassius, like many other orthodox interpreters, used collationes or collections of intertestamental passages to allow Scripture to interpret Scripture. Wenz draws on many examples from Glassius which apply this intertestamental hermeneutic and build constellations of verses to interpret, for example, the names or titles of the Son of God and their significance for His person and work. The collections of Old and New Testament passages, argues Wenz, provides the interpreter of the two Testaments not merely with a promise-fulfillment motif or a reduction of the intertestamental passages down to a narrowly defined Christological interpretation, but a rich, multifaceted proclamation of Christ, His church, and the eschatological hope of all believers. For Glassius, exegesis leads to preaching in such a way that the sermon both identifies the doctrinal content of biblical passages and then amplifies the doctrine through the Bible’s own interwoven narratives and rich illustrations. In chapter seven, Wenz explores primarily from Glassius’s own sermons his homiletical and pastoral application of Scripture. Here one finds in great detail how the attention Glassius gives to Scripture’s grammar and sacred rhetoric flourishes in his preaching. Wenz’s thorough analysis is replete with biblical images, metaphors, and figures, as well as analogies from nature that Glassius had used to paint Christ before his hearers and teach the whole counsel of God.

If readers are looking for a healthy dialogue with current sources to understand where Glassius and biblical interpretation in the Age of Lutheran Orthodoxy fit into modern conversations, they will have to wait until the end of the book. In the final summary chapter, Wenz engages with modern sources and makes a case for Glassius’s place in the history of biblical interpretation and how the breadth of his work intersects, sometimes unexpectedly, with various scholarly conversations. For example, Wenz sees his work on Glassius intersecting with Hamann research and Johann Georg Hamann’s interest in God’s condescension in human language, as well as with the Stanford literary scholar, Hans Ulrich Gumbrecht and his book, Production of Presence: What Meaning Cannot Convey (Stanford, 2004). Although Wenz faithfully and thoroughly presents Glassius’s work in the previous seven chapters, he misses some opportunities to build an argument from the wealth of material and to weigh Glassius against current scholarly conversations. More interaction with present scholarship throughout the book would perhaps have helped underscore the importance of the many examples that Wenz gives from Glassius’s works. The goal of this monumental work, however, was to present the philological and homiletical contributions of Glassius to Lutheran theology and biblical hermeneutics. Wenz’s book succeeds in giving us a great deal of Glassius and is an invaluable contribution to advanced studies in confessional Lutheran hermeneutics and preaching.