Prayerbook of Christ: Dietrich Bonhoeffer’s Christological Interpretation of the Psalms 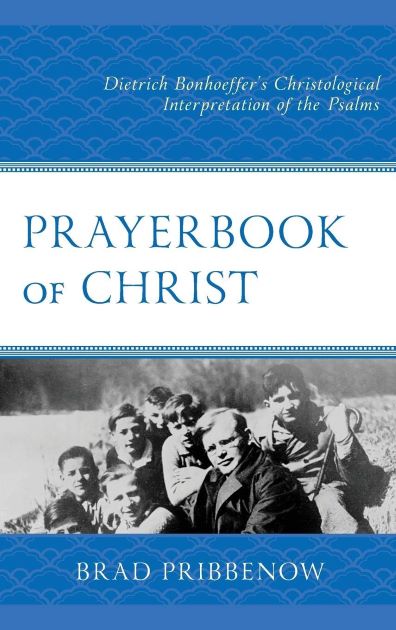 In Brad Pribbenow’s own words, “the focus of this book is on the Christological interpretation of the Psalms as formed and practiced by Dietrich Bonhoeffer” (181); and yet, it is so much more. Pribbenow’s work begins with a broad historical survey of the way the Psalms have been interpreted from the New Testament through the time of Scholasticism, to Martin Luther’s interpretation of the Psalms, through the time of modernity, and ending with how the Old Testament as a whole was viewed in the early twentieth century. This broad survey lays the groundwork for Pribbenow’s central thesis: namely that Bonhoeffer’s approach to understanding the Psalms and praying them is, in certain aspects, unique in this long tradition of interpretation.

In support of his thesis, Pribbenow contends that Bonhoeffer sees Jesus as the one who not only prayed the Psalms in his incarnation, but also, as true God, is simultaneously the one to whom the Psalms are being prayed. In one thought provoking example, Pribbenow cites Bonhoeffer’s controversial treatment of Psalm 58 where he sees Jesus as both the one praying the Psalm, and the one against whom the psalm is prayed. How Bonhoeffer arrives at this interpretation is that he sees Jesus as both the innocent one and the one who assumes all of humanity’s sin and rebellion in himself, becoming “sin for us.” (2 Cor. 5:21)

Pribbenow asserts that Bonhoeffer’s unique Christological interpretation of the Psalms provides the church-community with a new understanding of what is happening when Christians pray the Psalms. Because Christ Himself prayed them in his incarnation and made them his prayerbook, the words of the Psalms are given a new authority as the words of God and, as such, they are the ultimate prayerbook of the Church. Pribbenow cites other theologians who support this idea, going even further and asserting that the whole corpus of the Psalms is simply an elongated rendering of the Lord’s Prayer, as both the Lord’s Prayer and the Psalms encompass everything for which the Christian should pray, as evidenced by the fact that Jesus himself prayed in this way. This understanding of praying the Psalms is enhanced by realizing that Christ, as our ascended High Priest continues to pray them as he did while here on earth, with the result that when the Christian prays, it is Christ who is praying with him, in him, and for him.

Pribbenow’s work is thoroughly scholarly, providing a richly satisfying insight into Bonhoeffer’s theological treatment of the Psalms as he applied them to himself and the people he counseled, especially during the time of Nazi persecution and his own imprisonment. The pastor-theologian will find many examples of how Bonhoeffer treated various Psalms in his sermons, lectures, commentary, and devotional writings. The chapters are short and easily manageable, with the nice addition of a full chronology of Bonhoeffer’s life at the end of the book. A minor critique might be that Pribbenow routinely repeats key thoughts and phrases throughout the book, but this does not distract from the book’s overall readability. For the pastor-theologian who would be a student of the Psalms, this is recommended reading.