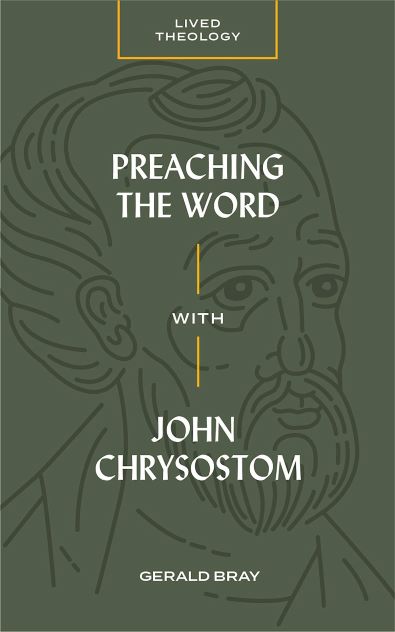 One of the (many) wonderful things about John Chrysostom’s preaching is its inherent accessibility. The “mouth of gold” was so named for his preaching ability, and if you find yourself reading Chrysostom chances are you’re reading a sermon. He avoids long systematic treatments of theological topics, even as he tackles the christological controversies of late fourth- and early fifth-century Antioch and Constantinople, preferring to allow his hearers to dwell in the mysteries of God, mysteries that are revealed in the person of Jesus Christ and delivered to believers in the words of Scripture and in the Eucharist. In his book Preaching the Word with John Chrysostom, Gerald Bray presents Chrysostom’s preaching to a new generation of Christian preachers, many of whom may be either unfamiliar with his work, uncomfortable with the antiquated translations available, or simply daunted by the sheer amount of his material. On the whole, Bray does an admirable job of making an already accessible preacher even more so, not just in homiletical content, but also in terms of Chrysostom’s understanding of God’s posture toward his creation as well as the preacher’s own pastoral identity.

Throughout his book, Bray is reliant on the works of Chrysostom scholars David Rylaarsdam and Margaret Mitchell, for which he is to be commended. Rylaarsdam’s John Chrysostom on Divine Pedagogy: The Coherence of His Theology and Preaching serves as a basis for Bray’s understanding of Chrysostom’s theology of “condescension” (συγκαταβασις), while Mitchell’s The Heavenly Trumpet: John Chrysostom and the Art of Pauline Interpretation provides an excellent analysis of St. Paul’s heavy influence on Chrysostom’s understanding of his identity as a preacher of Jesus Christ. In his reading and portrait of the subject, Bray thoroughly quells the modern notion that Chrysostom was simplistic or even, as has been claimed, “anti-intellectual,” and instead reveals a depth of thought that more than justifies his position among the great preachers of the Christian faith. Additionally, while the sheer amount and diversity of Chrysostom’s writings make any sort of systematic treatment of his work difficult, Bray does an exceptional job of understanding Chrysostom’s thought in terms of the condescension of God, the lens through which he read, interpreted, and preached the Scriptures.

Although he does not give much background to John Chrysostom’s early training under Libanius, Bray’s portrait of John Chrysostom is one that is steeped in Greek tradition in terms of his understanding of virtue and rhetoric; at several points, he remarks on Chrysostom’s fondness for explaining the events of Scripture in terms of balance and necessity, even going so far as to describe his view of Matthew’s Gospel as a “golden mean” between Mark and Luke. It is in this tradition that Chrysostom’s understanding of condescension takes form, as God communicates with his people in a way that makes an unknowable God knowable, a reality fully experienced in the human person of Jesus. Bray notes that God’s condescension serves as the entire basis of Chrysostom’s christological understanding, as Jesus is born, suffers, and dies as an act of divine love for the entire human race. Bray gives a similar explanation of John Chrysostom’s treatment of the creation account, in which he teaches that God spoke his creation into being in a way that could be understood by what he had created. God’s words in Genesis 1, Chrysostom tells us, are simple, and are given to a people not yet ready for the full revelation of God’s salvific plan. Even his understanding of virtue, so prevalent in his preaching and the source of many accusations of moralism, is seen not as a source of righteousness, but as a visual representation of the life and image of God. Indeed, Bray does an excellent job of demonstrating the nature of Chrysostom’s preoccupation with virtue, which is distinguished from “works” due to its foundation in God’s condescension toward humanity.

To be sure, the primary criticism of Bray’s work is that it stops short of conveying the full impact of Chrysostom’s understanding of condescension. Noticeably absent is any detailed treatment of the Eucharist in Chrysostom’s preaching; for a book marketed to preachers, this comes as a bit of an oversight. For John Chrysostom (described in Quasten’s Patrology as “Doctor Eucharistae”), the Eucharist served as the source and object of his homiletic. In his thinking, the sermon was not the high point of the service, but rather the Eucharist, in which the content of the sermon was held, cherished, and internalized into the Christian’s very body. For this reason, Chrysostom would often describe the condescension of God as a “mystery,” apparently in order to give the term double meaning: the mystery given to us in Scripture is revealed in its fullness by the mystery lying on the altar. Chrysostom’s preaching simply cannot be understood apart from his fiercely sacramental understanding of God’s condescension, in which he goes so far as to refer to Scripture itself as a type of incarnation, where the words of God become clothed in the skin of human speech. For Chrysostom, a sermon without the body and blood of Christ on the altar is a blind sermon, a message without form, foundation, or purpose.

All in all, there is much to recommend Gerald Bray’s work, the chief reason being that it places the works of a great preacher into the hands of preachers. For those unfamiliar with Chrysostom’s preaching and looking to enhance their own, Preaching the Word with John Chrysostom is a helpful introduction. Additionally, it allows those who are more interested in Chrysostom’s theology to access more detailed treatments of his work, in particular that of Rylaarsdam and Mitchell. (I would also recommend Hans Boersma’s Scripture as Real Presence: Sacramental Exegesis in the Early Church, which contains an excellent section on Chrysostom’s understanding of condescension.) As always, however, the best way to familiarize yourself with any preacher is to read their sermons; fortunately for the church, many of Chrysostom’s sermons still exist in English translations, and many of these have been updated to less-antiquated versions. To any preacher new to Chrysostom, I would say this: read Gerald Bray, and then read Chrysostom’s Baptismal Instructions, and allow your congregation to benefit from one of the greatest preachers in the history of the Christian church.