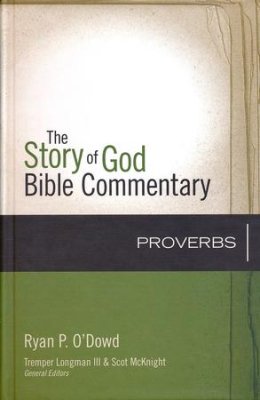 O’Dowd’s commentary on Proverbs meets its goal “of expositing the Old Testament in its original setting and also from a New Testament perspective” (14). Each chapter has three parts: “Listen to the Story” (presenting the NIV 2011 text and connections with other passages from Scripture), “Explain the Story” (O’Dowd’s textual commentary), and “Live the Story” (short essays that apply the text to issues in the life of Christians).

According to an oft-repeated theme of the commentary, wisdom is to align one’s desires and actions with God’s created design for the world. O’Dowd is respectful of the text, presenting Proverbs as a pedagogical book of Solomon’s (and others’) sayings arranged by a talented editor(s). His footnotes show familiarity with recent scholarship, though he relies especially on R. Van Leeuwen, B. Waltke, and G. Von Rad. O’Dowd succinctly explains the structure and meaning of the text, as well as the wordplay in the Hebrew. However, he does not delve into the intricacies of the Hebrew grammar. O’Dowd often connects the themes of Proverbs to other books of Scripture, especially Deuteronomy and Genesis.

O’Dowd, regrettably, sees a sharp division between the Old and New Testaments (e.g. 82 and 115) to the point of obscuring direct references to Christ. While he is familiar with “wisdom Christology” (see 44, 73–74), he fails to identify the Wisdom of Proverbs 3 and 8 with Christ. He understands Old Testament theology as evolving, such that the original readers of Proverbs did not have a sense of the resurrected life (200), for example.

O’Dowd’s book is helpful and, at times, insightful, especially in the “Live the Story” sections. His commentary is a good read for both clergy and laity.