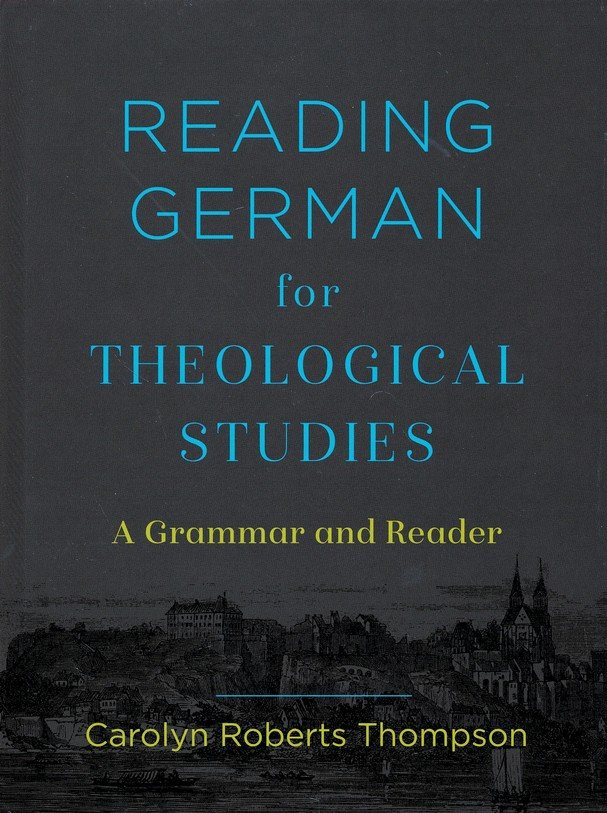 This is a textbook that leads the student who already knows a language like Greek to reading 20th century academic German theology. The author is an adjunct professor at Abilene Christian University (Abilene, TX). The preface and “How to Get the Most from this Book” make clear what students should expect: learning German takes a long time (vii, ix).

The book starts with an introduction filled with grammatical concepts. The lessons, then, are based on real theological readings (the Bible or other literature). This makes it necessary in lesson 1 already to deal with the subjunctive mood (19). This might frustrate some students, since a fuller discussion of the subjunctive is reserved for later. Rather than giving comprehensive coverage of topics one after another, she spreads out her teaching from lesson to lesson. This can be good for many students. One learns the main aspects of a concept and then refines his knowledge later. I like her explanation of commonly mistranslated phrases and constructions, like “indem,” “es sei denn,” and “erst.” It is especially welcome how frequently she emphasizes the importance of having a complete understanding of the forms of words and of how each word functions within a sentence. Of course, a textbook of this kind cannot possibly be comprehensive, and the author does not claim to be absolutely complete. Students will have to use real dictionaries to supplement the textbook.

The texts chosen begin with the Bible. The Bible is a great place to start, since this is foundational for all real theology. One could wish, however, that the author had chosen to feature the 1912 and 1984 Lutherbibel rather than the 1942 and 2017 Zürcher Bibel. All the selected texts with one exception are from the 20th century. By lesson 31, one is reading Karl Barth. Several of the readings feature theological encyclopedias and dictionaries. This is an excellent choice for graduate students and all future researchers, since there are so many excellent German reference works, and they are often complicated and highly abbreviated. The author helps to unravel such mysteries for her students. The answers to the exercises at the back of the book facilitate self-study. The grammar at the back of the book may be useful but it likely will not answer all of a student’s grammatical questions. If it does not, there are free public domain grammars readily available, such as Carl Eduard Aue, Elementary German Grammar (London: W. & R. Chambers, 1897), at www.archive.org.

Being an editor and researcher of early modern Lutheran theology, I could wish that some time had been spent on German from before the 20th century. The text does not even really introduce students to Fraktur and other common German typefaces. (What is introduced in lesson 45 as Fraktur is really an early 20th century kind of Rundgotisch—beautiful, but quite modern.) The author claims the book can be used as a self-teaching tool (x). For graduate students learning German for reading purposes, if they have already learned an inflected language like Greek or Latin, I would agree—this book can work. But in general, my advice is that you should always take a class with a real teacher for the first semester of a foreign language. You need a professor to answer the questions that your textbook does not answer.

Some students and teachers like to learn a language using real foreign texts from the very beginning. Others will find this procedure to be frustrating, since they have not learned enough grammar to make sense of it, even if glosses are given for every single word. The fact is, inductive language acquisition works well for small children since that is the only way they can learn their first language, and they spend hours every day absorbing the sounds of their mother tongue. Inductive language acquisition can take a long time, however. School children who move to a foreign country require a year before being able to communicate, even spending hours a day with the new language all around them. I think a deductive approach works best for adults, though I admit this may vary according to the individual. In my opinion, it is preferable to teach one concept at a time, with repetitive exercises that practice just the new and previously learned concepts and vocabulary. Then, after sufficient grammar has been learned, the student should be challenged with foreign language texts from the real world, which he must translate using the best grammars and dictionaries available. Yet I do not teach German as my profession, and people learn in various ways. Perhaps Thompson’s approach will suit many students well. Considering the vast wealth of German theology that will never be translated, it’s worth every effort to learn the language.