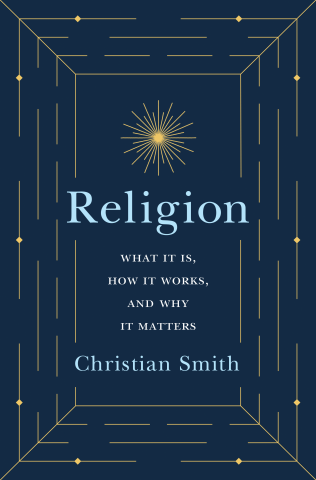 Christian Smith, the Notre Dame sociologist who gave us the term “moral therapeutic deism,” has written a groundbreaking contribution to the sociology of religion, setting the parameters of the field in a more rigorous and less reductionistic way.

Contrary to the contention of other social scientists, Smith says that religion is not primarily about personal identity, community belonging, moral order, institutional legitimation, transcendent experience, or the meaning of life. These can be secondary effects of religion, he says, but they can also be found in non-religious ways. Rather, Smith defines religion in terms of “culturally prescribed practices” by which human beings turn to “superhuman powers” to help them realize “human goods” and avoid what is bad.

Smith brackets religious truth claims as being outside the competency of social science, and so focuses on religious practices rather than beliefs. After all, some people practice religion, even though they may not believe in or even be aware of all that it teaches.

His definition works well for Roman Catholicism, animism, other world religions, the prosperity gospel, and nominal Christianity. It would seem to apply less well to theologies that stress faith—that is, belief—such as evangelicalism (which accepts few sacred “practices”) and confessional Lutheranism (which stresses God’s gracious gifts apart from anything human beings can do to earn them). Smith addresses this in part by saying that blessings such as forgiveness, communion with God, and a relationship with Christ are also “goods.” He says that his definition can extend to the emphasis on giving and receiving found in traditions that stress God’s grace alone.

Since religion has to do with the human need for “superhuman” help for their problems, suffering—far from driving people away from religion as is often assumed—actually strengthens religion. Conversely, the comparative comfort and affluence of the West may contribute to secularism. Nevertheless, Smith criticizes “secularization theory” and insists that religion is hardwired into the human organism. Because people will always have needs, he says, they will always have religion.