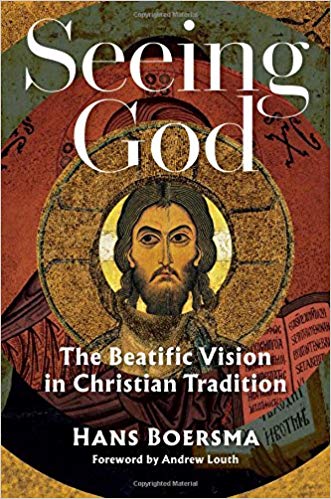 Hans Boersma, best known for his advocacy of Christian Platonism as the necessary fundament for a Christian ontology, has in Seeing God given us a tour de force on the topic of the beatific vision as the telos of human existence as that has been articulated by major figures in the history of the church. As such, this book is a paradigm of historical theology which introduces significant theological issues through the study of various voices who have struggled to do justice to the mysteries of the Christian faith.

The beatific vision as the telos of man has been a constant in Christian theology from the beginning, although in contemporary thought it has suffered some neglect. Boersma’s discussions of his chosen representatives for the beatific vision are consistently excellent and enlightening and evince a thorough reading and engagement with the primary source materials and relevant secondary literature. There is much here to learn and much to think about. The breadth of his chosen representatives is remarkable, and for most readers his discussions will be a primer on figures unknown, yet worthy of knowing.

True to Boerma’s advocacy of the Platonic tradition as a necessary philosophical background for an ontology of participation (Boersma’s “sacramentalism”), the first chapter outlines both strengths and weaknesses in Plato and Plotinus as conceptual aids in thinking about the beatific vision. Both regarded vision of the divine as possible, however fleeting and imperfect, already in this life, an aspect which Boersma finds (rightly enough) as a positive. Yet, he is aware that both depreciate the body, an aspect which Boersma finds (rightly enough) problematic: “One of the challenges facing Christian theologians would be how to give expression to their faith in the beatific vision without gainsaying either the incarnation or the bodily resurrection” (75). Among the theological issues always in play is the significance of the body for thinking of the eschatological fullness of seeing God, and concomitant with that problem the necessity of maintaining the distinction between God and the creature. Interesting, too, is the question of whether the beatific vision is a purely mental/intellectual state or whether the vision of God is through our physical, albeit transfigured, eyes. Finally, the question of what exactly is seen in the beatific vision remains central in all representatives. Is it the essence of God; is it the incarnate Christ; is it the Trinity? With such questions in play Boersma provides wholly engaging discussions of the following: Gregory of Nyssa; Augustine; Thomas Aquinas and Gregory Palamas; Symeon the New Theologian and John of the Cross; Bonaventure and Nicholas of Cusa; Dante; John Calvin; John Donne; Puritan and Dutch Reformed thinkers (Isaac Ambrose, John Owen, Richard Baxter, Thomas Watson, Abraham Kuyper); Jonathan Edwards. Finally, in a concluding chapter Boersma offers his own reflections on how best to think of the beatific vision.

Strangely absent from the discussion is any mention or engagement with Luther and the Lutheran tradition. Luther is mentioned only once, in a footnote, to the effect that instead of a beatific vision Luther proposed a beatific hearing (27, n 24). Later, in another footnote, Boersma refers to a comment by Herman Bavinck that various Lutheran scholastics taught that the final vision of God would be with our physical eyes (mentioned are Quenstedt, Hollaz, Hülsemann, Lucas Maius, Johann Wolfgang Jäger)(423, n 100).[1] In fact, the beatific vision was given considerable discussion in the Lutheran tradition, as the extended treatment by Johann Gerhard attests. Nonetheless, as one from Dutch Reformed background, Boersma may be excused for this lapse. For Lutheran readers his discussion of Puritan and Dutch Reformed thinkers no doubt fills a void in our own knowledge.

This book is worth reading, and I highly recommend it. As I noted, it is superbly researched, and one can only deeply respect Boersma’s compendious mastery of the sources. At the same time, some comments seem appropriate. Boersma notes that Aquinas thinks the object of the beatific vision is the essence of God (οὐσία). He never speaks of the beatific vision as a vision of Christ (414–417). Here “essence” refers to the deity of God as such.[2] As Boersma rightly notes, the Eastern tradition and most Protestants avoid such a conclusion as a threat to divine transcendence. According to his essence, God is incomprehensible, unknowable, and invisible. Boersma shares this reserve, insisting that the object of the beatific vision must be Christ himself. One can only concur with Boersma in this. But elsewhere, and throughout the book, Boersma uses the term “essence” in a wholly different, and inexact, sense. He frequently pairs “essence” with the “character” of God: “If we see the character or οὐσία of God in Christ . . . ” (417). But we do not see the οὐσία of God in Christ, not if by οὐσία the οὐσία of Thomas Aquinas is meant. A better term for “character” would be “nature” or φύσις. It is, perhaps, a mere linguistic point; but the inexactitude of Boersma’s employment of “essence” tends at times to befuddle his comments.

In my judgment, Boersma’s own reflections largely come out on the right side of things. He insists that the beatific vision must be that of the incarnate Christ. Although not vigorously, he demurs from the common opinion (Augustine) that we will see God only mentally or intellectually. We will see God with our physical eyes. This is an important point, for apart from this claim it is impossible to assert that Christ is the object of the beatific vision. Interestingly, it is the Puritan thinkers (John Owen, Thomas Watson) and the Orthodox Gregory Palamas who most decidedly insist on the beatific vision through transfigured physical eyes. Despite the wealth of discussion, it remains for me quite strange that the role of the earthly Jesus, the Christian liturgy, the Eucharist, and the church seem with extreme rarity to play a role in thinking about the beatific vision. Equally strange is the absence of any role the forgiveness of sins plays, although the purity of virtue is common. Had Boersma paid attention to the Lutheran tradition, these aspects might have risen to the level of mention.[3]

[1] That Boersma refers to Bavinck for this information indicates his choice to neglect the Lutheran heritage. One might mention that Maius and Jäger are hardly major figures in the Lutheran pantheon. In fact, Maius (1522-1598) converted to Calvinism!

[2] A classic text is 1 Jn 3:2: “When he shall appear we shall be like to him, because we shall se him as he is (καθώς ἐστιν).” Thomas takes the “is” as strictly ontological, the being of God.

[3] See, for example, the short, but dense, discussion of “Eternal Life” (Creation and Redemption, 575-579): “[The beatific vision], however, is not a mystical ascent to God’s eternal majesty, but a vision of God’s glory in the man Jesus Christ our brother.”