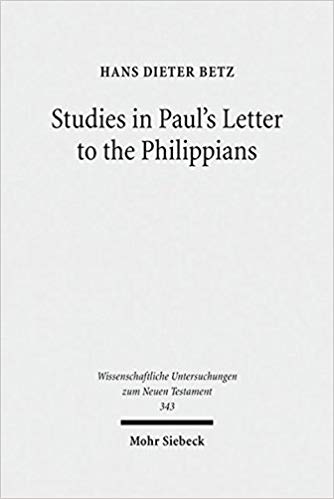 “Studies” means that the seven chapters contained here do not present another full commentary on the letter, but supplement preexisting scholarship. Betz supposes that Philippians is the “most difficult” of Paul’s letters to interpret (v), and most chapters shed light on those text segments that have most bearing upon the letter as a whole, namely,

III. An Autobiographical Memorandum (3:1b–21)

Hence, the methods applied are philological and historical, and the focus is on literary structure and cultural background. Betz thinks Philippians is a literary composition put into final form by a secondary redactor who integrated Paul’s original main letter (1:1–3:1a; 4:1–9, 21–23) with two attachments, namely, the memorandum of 3:1b–21, and receipt of 4:10–20 (see above). In any event, all the sections really were authored by Paul himself and co-authored by Timothy who approved the letter’s content. However, the original main letter as well as the two “mailings” (as Betz refers to the attachments) were conveyed to the Philippians by Epaphroditus (mentioned in 2:25; 4:18) not long before Paul’s death. As such, Philippians contains Paul’s last words—and at a time when the apostle could not have known whether his case before the imperial representative would be resolved successfully, and he would live, or whether he would lose the case, and so be subject to immediate execution. The ambiguity as to whether Paul would live or die permeates the entire letter and is embodied by that well-known passage that Christians who face death have long treasured: “for to me to live is Christ and to die is gain” (1:21).

It would be tedious to describe each chapter in turn, though a description of how one chapter works shall highlight the care and attention to detail Betz expends upon each of the five text segments. (There are two additional chapters that do not fit the scheme represented above, namely, chapter I, an Introduction, and chapter VII, an attempt to account for the literary genre of Philippians.) Each of the five chapters possesses an initial Introduction, then (in the case of chapter II, Phil 1:21–26) a summary of the situation in general, a statement of principle, text-critical issues, the sententia of 1:21 (“for me living [is] Christ and dying gain”), Paul’s expansion of the sententia in 1:22–25, his epilogue in 1:26, the passage in its literary contexts, some examples drawn from Greco-Roman parallels, and a summary statement that Paul’s “to live is Christ and die is gain” represents a Christian alternative to Epicureanism. The volume’s Bibliography (155–174) contains ancient Greek and Latin sources pertinent to the letter, modern commentaries on Philippians and Philemon, and further commentaries and scholarly literature. The Indices (175–189) contain the volume’s citations from Greek literature, Latin literature, Old Testament (LXX) and Hellenistic Judaism, New Testament and Apocrypha, patristic literature, and modern authors.

Betz supports the idea that Paul writes as a prisoner in Rome (e.g., 12, 19, 126, 127), a traditional assumption (see Acts 28:16–31 for what may be the historical background). Nevertheless, Betz grounds what has always been regarded as an early tradition on what historical evidence exists. Let us hear from Betz himself how Paul might well have met his end:

The most likely date of origin of the letter is the time after 62 CE, when Nero replaced Afranius Burrus, the deceased praefectus praetorio, with the rogue Ofonius Tigillinus. This man also became Nero’s main advisor, after Lucius Annaeus Seneca, the philosopher, had resigned from this office. During Tigellinus’ regime the jurisdictional administration eventually collapsed, when a wave of illicit murders of suspected enemies of Nero swept through the city. As a result, Paul’s trial was never completed, but he most likely became a victim of rampant thugs murdering countless presumed enemies of Nero and Tigellinus. According to Philippians, Paul faced the situation prior to the pronouncement of his verdict, when he did not know what the verdict was going to be, dismissal or condemnation, —dismissal because of procedural failure, or death because of political turmoil (VI).

A type of verification is afforded by the real-life example of the NT critic Ernst Lohmeyer (AD 1890–1946) whose scholarly work on Philippians advanced the thesis that Paul suffered a martyr’s death (Lohmeyer’s scholarship to this effect is summarized on page 17 nn. 65–66). Lohmeyer survived the second world war, only to be arrested by Russian secret police in early 1946 and shot without trial in forests not far from Greifswald. Nothing was known about his fate for five years, and his grave remains unknown to this day: “Not unlike Paul, Lohmeyer himself was arrested due to a conspiracy and brutally murdered by thugs in the service of a dictatorial regime” (17; cf 152). Betz, to be sure, admits that correspondences between Paul and Lohmeyer could well be coincidental (18). Nevertheless, Lohmeyer’s experience gives point to what undoubtedly was Paul’s courageous witness to the very end—and his presenting of himself as an example to be emulated by the Philippian congregation. For these reasons, and others that cannot be explored here, it is Betz’s considered opinion that the letter belongs to the genre of praemeditatio mortis (“premeditation upon one’s death,” 153), convincing parallel examples of which are afforded by the writings of M. Tullius Cicero (106–43 BC) and the Stoic philosopher L. Annaeus Seneca (ca. 4 BC–65 AD).