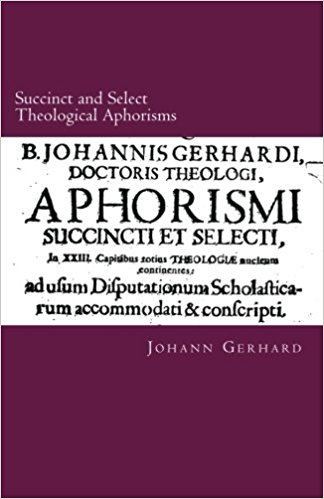 Johann Gerhard (1582–1637) was called to be a pastor and church superintendent in 1606, and in 1607 he began to preside at monthly disputations in Coburg with pastors and teachers of his district on the common topics (loci communes) of theology. By 1610 he had finished this series of disputations, and the next year the theses were printed as his Aphorismi Succincti Et Selecti . . . totius Theologiae nucleum continentes. These theses were the first stage of what would become his massive Theological Commonplaces (1610–1625). The Aphorismi succincti were popular enough to have been translated into English in the 17th century by Ralph Winterton and published in Cambridge under different titles in 1632 and 1640.[1] Now Paul A. Rydecki and Repristination Press have given us another translation of this dogmatic outline.

In his preface, Gerhard praises and defends disputations, both as academic exercises and ecclesiastical, serious argument. Yet he says the striving for truth must be joined with the pursuit of piety. The theses themselves are adorned by beautiful, pithy quotations from Augustine, Bernard, Hugh of St. Victor, and others. Many of the theses speak briefly of errors without explaining who holds those views and how they seek to support them. Readers will need to consult the Theological Commonplaces (CPH) for any points that Gerhard leaves unexplained here.

Besides the pleasure that reading this book provides, it will help readers in several ways. It covers topics ignored by American Lutheran dogmatics (such as details of marriage and just war). It also helps readers to avoid Lutheran cliches—such as that good works are only to be performed for the sake of one’s neighbor, which Gerhard corrects: they are also to be done, in faith, on account of God and for our own sake (127–128). In fact, Gerhard could also provide great clarity and dispel ambiguities in recent Lutheran conflicts over Law, Gospel, justification, and sanctification—as well as anthropology and the end times. Although just over 200 pages, Gerhard is comprehensive.

This is a beautiful translation, and it accords with the analogy of faith (Rom. 12:6), but in some places it is inaccurate. When speaking of the conscience as a syllogism with its premises and conclusion, Rydecki translates assumo as “assume” and assumptio as “assumption” (100), when they should be “supplies the minor premise” and “the minor premise,” respectively. These are technical terms in logic. Likewise, speaking of the 16th-century editor of Tertullian, Rydecki renders his name “Blessed Rhenanus” (104). But Gerhard was not pronouncing Rhenanus a saint. His first name was Beatus. Further examples could be cited. Yet despite such mistakes (to which many other translations are even more liable) and the lack of a Scripture index, this volume is highly recommended—both for the elegance of the prose and for the content, which is so needed in our times.

[1] A golden chaine of divine aphorismes written by John Gerhard Doctor of Divinitie and superintendent of Heldburg. Translated by Ralph Winterton ([Cambridge]: printers to the Universitie, 1632); The Summe of Christian Doctrine by John Gerhard Doctor in Diuinitie: And translated by Ralph Witterton Fellow of Kings Colledge in Cambridge (Cambridge: Roger Daniel, 1640).