The Art of Exegesis: An Analysis of the Life and Work of Mar...

The Art of Exegesis: An Analysis of the Life and Work of Martin Hans Franzmann 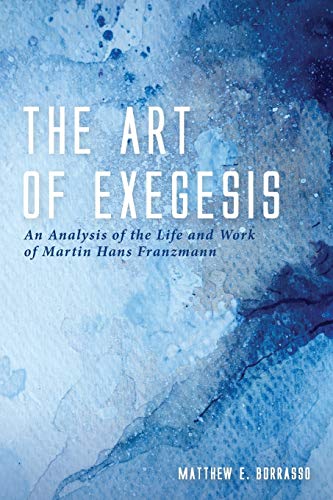 Today Franzmann is more likely known by Lutheran Church—Missouri Synod (LCMS) pastors and congregations for his six hymns in the Lutheran Service Book. His “Thy Strong Word” has found its way into other hymnals and his translation of “With High Delight Let Us Unite” is an Easter favorite. Franzmann was also a New Testament scholar with an extensive literary output (161–191). He joined the faculty of Concordia Seminary, Saint Louis in 1948, not long before methods questioning the historical authenticity of the biblical narratives were introduced. Perhaps with premonition of nearing disruption over the validity of these methods, he left in 1969 to become the tutor of Westfield House in Cambridge, England. During his seminary teaching career he found himself caught between younger professors who held to the newer radical views of biblical interpretations and the old guard who adhered to the historical grammatical method. In February 1974 these differences came to a head when the faculty majority left their posts, an action that eventually led to the formation of the ELCA. Then in England, Franzmann was chosen by LCMS president J.A.O. Preus to deliver the lead essay at an April, 1975, convocation to mediate the opposing positions. Both sides took exception to Franzmann’s paper and despondently he returned to Cambridge and in less than year he had gone to his death (152–155).

Bossarro handles Franzmann both critically and sympathetically. Unless readers knew otherwise, they would not recognize that The Art of Exegesis had been submitted first as a thesis for the master of sacred theology degree at United Lutheran Seminary, an institution combining the resources of the ELCA seminaries in Gettysburg and Philadelphia. The challenge in writing about Franzmann is how to present one who was both respected and yet rejected. Those who held opposing views on biblical interpretation looked to Franzmann for confirmation but in the end neither claimed him as its own (156). He was as much of a poet as he was theologian and would likely have lived a more contented life, had he remained an English professor, a position he held at the Northwestern College of the Wisconsin Synod and in whose theology and seminary he was brought up. Assigned by LCMS president John Behnken to prepare theological opinions and represent the synod in conversations with other Lutherans in America and Europe, Franzmann was the synod’s de facto ecumenical officer (15, 115–129). What made him stand out from those who shared his theologically conservative views was that commitment to the Lutheran Confessions did not take precedence over the Scriptures by which they must be continually tested.

Franzmann’s crowning achievement could have been his essay “The Nature and Function of Holy Scripture” which was delivered at the April, 1975, convocation that was intended as a last ditch effort, by LCMS president J.A.O. Preus, to prevent what was already then the irretrievable split in the synod. At issue was that the historical, critical method on which its practitioners, in and out of the synod, both then and now, had no agreed definition. As he had done before, Franzmann parsed the words ‘historical’ and ‘critical’ to come up with a definition with which few were satisfied (154–155). Harold Buls of the Fort Wayne faculty, a respondent for the conservative side, accused him of avoiding the real issues. For Ralph Klein, representing a radical definition, Franzmann had not gone far enough. Bossarro’s last chapter, “Weary of All Trumpeting,” echoes Franzmann’s desperation that led nearly a year later to his death, which was hardly noted in church publications. King David was both poet and warrior. Franzmann was more poet than warrior (39). By my count he wrote twenty hymns and translated nine (186–187).

Bossarro’s account brought back memories of the April, 1975, convocation. In the off hours Franzmann could be seen walking by himself around the campus. The man who had articulated the synod’s doctrine and represented its beliefs before other Lutherans was towards the end of his life alone. In calling for a convocation, Preus may have known that reconciliation between the opposing sides was no longer possible—this was evident years before. The dice had already been cast in February, 1974 and by April, 1975 that date had already become history. The convocation was hardly a slam dunk for the conservative party. Buls, who was the assigned champion for the conservative side (154), had his back pushed up against the wall by a barrage of questions from Robert Bertram that he could not answer. A review of the tapes will tell that story. E. J. Otto, Saint Louis chairman of the seminary board whose removal of Tietjen as president that precipitated the faculty walkout, walked back and forth at the rear of the chapel auditorium saying “Get him down! Get him down! He’s blowing it.” What precluded any positive outcome was an agreement there would be no time limitations for those who spoke from the floor microphones. Former Saint Louis faculty took advantage of this to give lengthy speeches that posed as questions. LCMS first vice-president Roland Wideranders was ineffective as chairman. Caught in the middle of a storm that already had lost its fury was Martin Franzmann.

No one event or person led up to that February day in 1974 when the Saint Louis faculty left their positions, but Norman Habel and Martin Scharlemann stand out. In a recent fancifully written autobiography, Why Are You Still a Lutheran? Memoirs of a Heretic Habel, who first stirred the pot in proposing an allegorical interpretation of Genesis 1–3, claims that Franzmann encouraged him to hold fast to his views. This seems unlikely, but who knows? Franzmann could be on both sides of an issue. Then there is Martin Scharlemann whose paper to the faculty on higher criticism aroused Franzmann’s ire. Scharlemann, who at first stood to the left of Franzmann, had had moved to his right. Franzmann had not changed. It would have been helpful if Bossarro had gone into detail on Franzmann’s critique of Scharlemann.

Bossarro’s book adds another chapter to what happened at the Saint Louis seminary in 1960s and 70s, but with Franzmann there will always be a few more cracks to be filled. In a master of sacred theology thesis presented to the Fort Wayne seminary faculty, LCMS pastor Daniel Burfiend argues that Franzmann should be understood primarily as a hymn writer (xi). This may be one way, but not the only way, in coming to terms with the man Martin Franzmann was. His leaving the seminary six years before the majority faculty walkout may have been prescient that differences between friends could not be resolved without someone—perhaps all, including himself being hurt. He was as much a tragic figure as was the synod itself. Bossarro has done a favor for the synod to which Franzmann devoted his professional life. Since this book preserves data that is not otherwise available, it deserves an index.