The Doctrine on Which the Church Stands or Falls: Justificat...

The Doctrine on Which the Church Stands or Falls: Justification in Biblical, Theological, Historical, and Pastoral Perspective 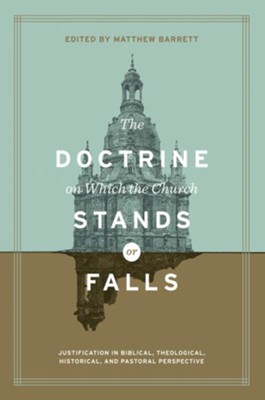 As the title of this book alludes, it covers the doctrine of justification from the perspectives of the four-fold division of theology. There are twenty-six chapters by twenty-six authors. All but one has an earned doctorate and the exception is a Ph.D. candidate. The authors are of the Reformed persuasion, except for Timo Laato of Sweden and Korey Maas at Hillsdale College, Michigan, who are Lutheran.

The foci of this book are the challenges brought to the historic Reformation doctrine of justification by the “New Perspective on Paul” (hereafter NPP) and other recent trends. NPP is associated chiefly with the names of E.P. Sanders, James D.G. Dunn, and N.T. Wright. NPP is hardly new these days! Our Saint Louis seminary had two fine articles on NPP in the Concordia Journal by James Meek and Andrew Das in 2001 (CJ 27 [2001], 208–52). Our Fort Wayne seminary devoted two days in its Exegetical Symposium, January 17-18, 2006, addressing NPP and related issues. Many of those essays were published thereafter in the Concordia Theological Quarterly, e.g., Stephen Westerholm in 2006 (CTQ 70 no. 3/4 [July/Oct 2006]) and Mark Seifrid in 2008 (CTQ 72 no. 1 [Jan 2008]). The present book, edited by Barrett, overwhelms all of the arguments of NPP, and in my opinion does so successfully.

Which essays in this book are most useful or interesting for Lutheran pastors? I put five on the top of my list. First, I recommend Robert J. Cara, “Setting the Record Straight: Second Temple Judaism and Works Righteousness” (147–178). This is based on research found in Cara’s book Cracking the Foundation of the New Perspective on Paul (Mentor, 2017) and in: Justification and Variegated Nomism (Baker Academic, 2001), edited by D.A. Carson, Peter O’Brien, and Mark Seifrid. It proves conclusively that Second Temple Judaism had a strong element of works righteousness, and this is what Jesus and Paul were arguing against. Second, I recommend Timo Laato, “The New Quest for Paul: A Critique of the New Perspective on Paul” (295–326). This essay, which is the most pointed assessment of NPP in this book, is based on his articles and book, Paul and Judaism: An Anthropological Approach (Scholars Press, 1995).

Third, I recommend Korey Maas, “The First and Chief Article: Luther’s Discovery of Sola Fide and Its Controversial Reception in Lutheranism” (657–700). This is an historical piece on Luther and his 16th century followers. Besides quoting familiar Lutheran authorities in his footnotes, Maas ends with a needed critique of the 1999 Catholic-Lutheran Joint Declaration on the Doctrine of Justification. Fourth, I would encourage readers to spend time on Bruce P. Baugus, “The Eclipse of Justification: Justification during the Enlightenment and Post-Enlightenment Eras” (769–810). This is not just another historical piece that paints a picture of the “usual suspects.” Rather the author rightly points to Socinianism and its Unitarian connections, to English rationalists, to Pietists (!), and to Albrecht Ritschl as key enemies of the Reformation idea of justification. Finally, I encourage parish pastors and catechists to read the very practical and thought-provoking essay by Sam Storms, “The Ground on Which We Stand: The Necessity of Justification for Pastoral Ministry” (839–866). Storms makes the key distinction that “Not all faith is saving faith!” (848–849). What then is saving, justifying faith? If you do not know, answers can be found in the latest volume of Johann Gerhard, Justification through Faith (CPH, 2018), xiii, 112-119, 122-123, 215, 242-245.

Behind all this impressive scholarship lies the encouragement and research of older scholars like Mark Seifrid—now at our Concordia Seminary, Saint Louis, and D.A. Carson. Carson gives a foreword and thus his imprimatur to this book The Doctrine on Which the Church Stands or Falls. It is encouraging to see Carson’s “The Gospel Coalition” (see www.thegospelcoalition) bring together Evangelical and Reformed leaders, in an attempt to preserve key Reformation insights in their institutions and churches. Preserving the doctrine of “justification through faith alone” is the key part of that attempt.