The Gospel According to St. Luke: Pillar New Testament Comme... 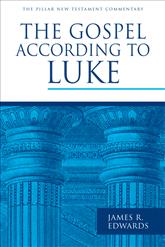 In this commentary, James R. Edwards (the Bruner-Welch Professor of The­ology at Whitworth University, Spokane, Washington) challenges the traditional view that Luke is the Gospel for the Greeks, citing “repeated reliance on Hebraisms in its construction” (10). For Edwards, “the primary purpose of the Third Gospel is to present Jesus as Messiah, and thus Israel’s long-awaited savior, into whom Gentiles are also engrafted” (10).

The broader purpose of Luke’s Gospel, according to Edwards, is apologetic, “to set forth a convincing narrative of the truth of the Christian Gospel” (14). This is Edwards’ conclusion based on the opening words of the Gospel, in which Luke states his purpose explicitly. Edwards opines that Luke is seeking to defend Christ and the Church against the belief that the Jews are the legitimate heir of the promises to Israel.

Edwards is to be commended for writing a commentary on the third Gospel that is as exegetically rigorous as it is edifying. His exegesis is enhanced in many places by his grappling with extra-biblical literature as well as a thorough analysis
of the Old Testament echoes and allusions throughout the Gospel. His attention to Old Testament background is seen especially in the infancy narrative, where he observes that “The effect of the infancy narratives is to demonstrate that the births of John and Jesus flow out of Israel’s saving history, and that the birth of Jesus marks the fulfillment of it” (31). He then goes on to identify several connections to Old Testament narratives, concluding: “Luke’s infancy narrative throbs with the literary and theological pulse of OT expectation.” He is careful to observe that “The allusions of the infancy narrative do not simply repeat former stories and outcomes, however, as do the decrees of Mount Olympus. . . . They herald new possibilities” (31).

His eye for Old Testament allusions and echoes leads Edwards to examine the Old Testament background of certain Greek expressions in the Gospel. This can be seen, for example, in his interpretation of Luke 4:14–30, where the townspeople drive Jesus out of the city (4:29). He notes that the Greek expression behind the phrase, ἐξέβαλον αὐτὸν ἔξω τῆς πόλεως is used in the LXX for “ridding a (Jewish) city of defilement, such as plague (Lev 14:40–41, 45), foreign gods (2 Chr 33:15), or a (supposed) evil person (1 Kgs 21:13). The phrase is a ritual anathema and a gauge of the outrage against Jesus. Jesus has become like a Gentile pollutant” (141). Edwards is also quick to point out instances in which something in Luke’s second book is foreshadowed in the Gospel. Using the same example above, the phrase in Luke 4:29 is a “foreshadowing of the Christian mission, for in Acts both Stephen (Acts 7:58) and Paul (Acts 14:5–6) will be “thrown outside the city” with murderous intent” (141).

Significant attention is paid to christological themes throughout the Gospel, making this commentary a useful contribution to the study of early christology. In his interpretation of Luke 5:1–11 (calling of the first disciples), for example, Edwards offers a helpful commentary on the use of the title “Lord” (κύριος). At first, Peter calls Jesus “Master” (ἐπιστάτης), signifying what is “ultimately allegiance” (155). However, after the miraculous catch of fish, Peter calls Jesus “Lord” (κύριος). While κύριος can mean “Sir” as well as “Lord,” Edwards argues for translating it Lord, since Luke has prepared readers for a full christological understanding of the term in verse 8. (155). According to Edwards, “Luke surely intends readers to hear ‘Lord’ as a divine title, confessing both Peter’s sin and his faith” (155–156).

A common feature in the Pillar New Testament Commentary series is the use of excurses to delve deeper into an issue of interest without getting “off topic” in the main body of the commentary. One can read an extended discussion of the relation of the infancy narrative to the body of the third Gospel (97–100). Edwards also devotes an entire excursus to the topic of “Christ” (271–279) in which he explores the Jewish antecedents for the title. One can also read about Elijah and Elisha typology in the Galilean Ministry (216–219), Jerusalem (408–409), and pairs in the third Gospel (413–414), to give just a sampling. A list of the different excurses and their page numbers in the Table of Contents would have been most helpful.

Besides Edwards’ tendency to try to make translations more colloquial, there is little to find fault with in this commentary. The amount of content that he fits into one volume is quite remarkable. I have already used it for research and would recommend it for use by parish pastors or professors of the New Testament.