Edited by Joseph Minich and Onsi A. Kamel 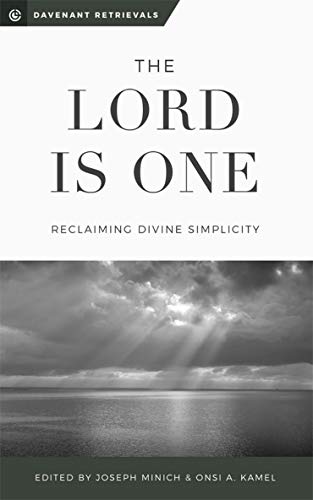 The past two decades have seen a renewal of traditional Christian teaching on the attributes of God. The Lord Is One: Reclaiming Divine Simplicity is part of that renewal. It seeks to argue for the cogency and necessity of the long-marginalized doctrine that God is metaphysically without parts, that is, that His attributes are not qualities added to His essence but each identical to it. The collection of eleven essays helpfully breaks down a complex topic into discussions of its key aspects by addressing the doctrine’s biblical basis, its historical development, and its relevance to recent theology.

The introductory essay sets the tone by explaining the long-held purposes of the doctrine and why there is so much at stake in defending it. Onsi Kamel writes that even “in one of its many articulations, simplicity has supported the deity of the Word, maintained God’s absolute primacy, upheld God’s immutability and eternity, and ensured that God is not confused with any element of created reality” (2).

Chapters 2 and 3 follow this call to take God’s simplicity in its classical understanding seriously by presenting exegetical cases for it. James Duguid contends that the strict monotheism of the Old Testament projects an understanding of divine attributes in direct correspondence to the classical theism to which the doctrine is integral. Steven Duby makes a scriptural and theological case that the Bible’s picture of a God absolutely faithful to his promises directly implies an immanent divine immutability further suggestive of God’s simple nature.

The next four chapters present a discussion of several historical formulations, which include those of Athanasius, Augustine, Thomas Aquinas, Jonathan Edwards, and the magisterial Calvinist reformers. Of note is Steven Wedgeworth’s essay on how the metaphysics of simplicity were intrinsic to Athanasius’s pro-Nicene doctrine of the Son’s deity, particularly as the Greek father drew on Holy Scripture. Illustrative as well is the way J. David Moser employs the doctrine in his defense of the classic Augustinian-Thomist view of divine appropriations, the notion that all external works of the Trinity operate indivisibly through the three divine persons.

Having established some biblical and historical foundations, The Lord Is One takes us into more contemporary territory in chapters 8, 9, and 10. Here Derrick Peterson lays much of the blame for the most recent abandonment of the notion of a non-composite deity at the feet of process theology. For Peterson, mid-twentieth-century process thinkers influenced a widespread misreading of how traditional views of God were metaphysically shaped and upheld from the time of the Church Fathers up to the Enlightenment. He then explains in the next essay how this misunderstanding has worked itself out in damaging ways in later twentieth-century Trinitarian theologies. Peterson’s two-chapter argument is long, substantive, and intriguing. However, his argument seems to wander a bit as it subsumes the topic of simplicity into a wider discussion of developments in the doctrine of God in general. Nathan Greeley’s succeeding chapter is more focused as it presents a retrieval of Duns Scotus’s distinctive metaphysical account of God’s simple nature over that of Thomas Aquinas.

The essay “Quo Vadis, Classical Theism?” closes the book. Here Joseph Minich points toward the future need not merely to defend the traditional doctrine of simplicity but, given what he sees as its historical contingency, to reorient it in light of certain modern challenges, especially those involving our theological language.

It’s a true cliché that the doctrine of divine simplicity is anything but simple. Hence the discussions comprising The Lord Is One will be most helpful to those with some working knowledge of the metaphysical issues surrounding it. The book is part of a movement among certain Reformed theologians seeking to reclaim a classical vision of God amid modern accounts that, in their assessment, have set forth a picture of God’s nature more reflective of the human than the divine. In this way, the book has relevance for not only academic theologians, but pastors seeking to give their congregations a more vital vision of the Bible’s immanent and transcendent deity. Still, as a serious effort of theological retrieval in the doctrine of God, Lutheran voices are absent. Perhaps this is a sign that more contribution from the other side of the Reformation is needed in this growing area of reflection.