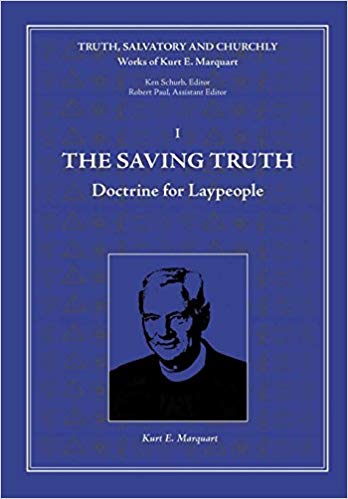 Few men have had as much influence on the theology of the Lutheran Church—Missouri Synod as Kurt Marquart. It is difficult for those who knew him to comprehend that so many years have passed since his passing in September, 2006. More vested clergy may have been in attendance for his funeral than for any other similar occasion. A room in the seminary library has been dedicated to his memory with an appropriate painting on the wall projecting the dignity in which he carried himself.

He served on the synod’s Commission on Theology and Church Relations longer than anyone else. To assure that his theology will continue to have an impact, Luther Academy, which has already published two volumes of his writings in its Confessional Lutheran Dogmatics series, has inaugurated another series, Truth, Salvatory and Churchly, to make his unpublished writings available to future generations. The subtitle of the first volume, Doctrine for Lay People, may be misleading, simply because in the lecture hall or in front of a group of laity, Marquart was encyclopedic in knowledge and easy to understand. If there was anyone who might be described as a Leonardo DaVinci in what he knew about theology and science, it was Marquart. Whatever the circumstances, he was engaging as no one else was. Topics covered in the first volume of the series are the scriptures, incarnation, justification and sanctification, law, gospel and the means of grace, baptism, the Lord Supper and an apologetic defense of Christianity.

Marquart wrote the way he spoke and so this is as easy a read as it is profound. For those who knew him, these essays will make him alive. Others will be in for treat in getting to know him. Of the nine chapters, chapter 2, “The Living God” was written by Robert D. Preus, though it might be discovered, in boxes of papers Marquart left behind, that Marquart also addressed this topic. As we await the second volume and third volumes with essays specifically addressed to pastors and scholars, we can enjoy visiting with him in the first volume.