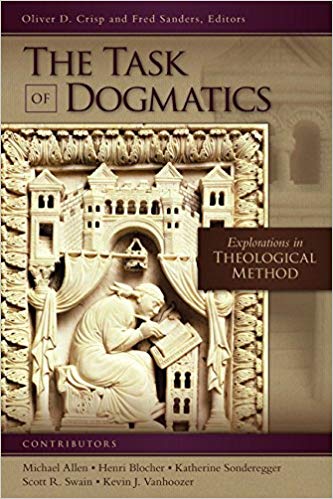 This book is the fifth in a series of proceedings from the Los Angeles Theology Conference (LATC). Lutheran pastors and Lutheran theologians who wonder “What are the Evangelical and Reformed theologians doing these days?” could find that question answered by consulting the lectures in this series, which include the doctrines of Christology (2013), the Trinity (2014), the Atonement (2015), and Scriptures (2016).

The present volume contains eleven lectures given in 2017 by both Reformed and Evangelical theologians, most of which have a conservative tendency, but are not obviously in the “inerrantist” camp. The more prominent authors include Scott Swain, Michael Allen, Kevin Vanhoozer, Katherine Sonderegger, and Henri Blocher, the only lecturer from Europe. Other lectures are by James Arcadi, Brannon Ellis, Joshua Malone, Gavin Ortlund, Darren Sumner, Chris Tilling, and Sameer Yadav. There are no lectures by Lutherans or others outside of the Reformed-Evangelical camp.

The lectures address a wide variety of topics within the general category of theological method. Two of the lectures, by Swain and by Ellis/Malone, draw on the rich heritage of the orthodox Reformed tradition. Another two lectures, by Sumner and Arcadi, are heavily into a Barthian approach. Yadav examines the methodological work of Hans Frei, George Lindbeck, and their critics. Ortlund argues that Protestants should be reading patristic and medieval theologians, something Lutherans have been saying since the sixteenth century. I found the Blocher lecture on “Permanent Validity and Contextual Relativity of Doctrinal Statements,” influenced by and critical of Ricoeur, to be the most helpful for suggesting ways to address the modern challenges of anti-foundationalism and post-modernism.