The Unholy Trinity: Blocking the Left’s Assault on Life, M...

The Unholy Trinity: Blocking the Left’s Assault on Life, Marriage, and Gender 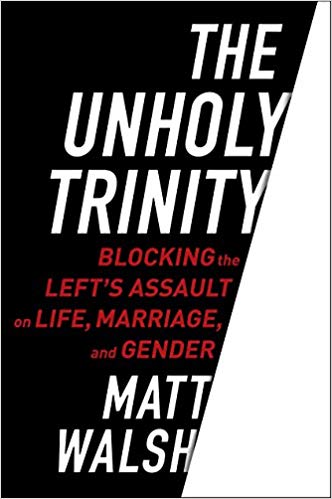 Matt Walsh, conservative and columnist for TheBlaze, here offers his debut book excoriating the politically correct/ liberal/ progressive/ secularist/ relativist positions on critical social issues of our day. Humorously satirical yet earnest, he exposes the sheer inconsistency and insanity of their claims.

Walsh, who is a conservative Roman Catholic, demonstrates how the assault on life, marriage, and gender is all grounded in Satan-borne narcissistic love of self. But the book is not so much an exposition of political theology as natural-law common sense. The assault on life especially (legal abortion, birth control, and assisted suicide) is a catalyst for his treatment of the other areas with which he takes issue. Simply put, “If you can [legally] kill . . . you can do anything.”

The subtitle, “Blocking the Left’s Assault . . .”, is not so much descriptive of strategies or tactics for readers, but more what Walsh does by his highly-effective common sense logical argumentation. In regard to strategy, He concludes that what is best for “blocking the left” is simply the pursuit of the truth – knowing there is objective truth, loving it, and not giving way to fear. Such is found ultimately in Christ.

The book is not always so precise in defining terms, but it avoids bogging down the reader with in-depth historical and legal diagnosis. What it does give is a fast-reading, quick-witted ripping of current absurdities.

Though certainly more apologetically divisive than irenic, this is a fast read for pastors or laymen who want to better understand and articulate why Christians and social conservatives stand as they do.