The Way of Concord: From Historic Text to Contemporary Witness

The Way of Concord: From Historic Text to Contemporary Witness 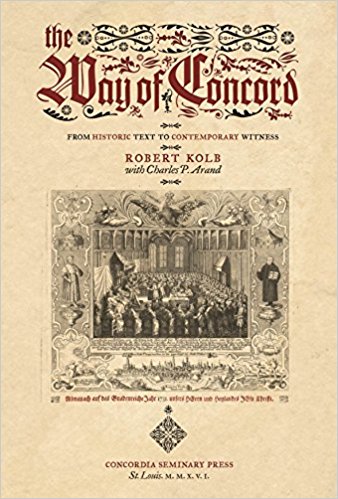 In The Way of Concord, Robert Kolb navigates through the political and ecclesial history that lies behind the Confessions of the Evangelical Lutheran Church. He spares no detail as to the occasions, conflicts, persons involved, etc., of each document contained in what became the Book of Concord. For example, he points out that Melanchthon “used the so-called ‘genus iudicale,’ the rhetorical form for effective presentation of ideas in a courtroom,” in constructing the Apology of the Augsburg Confession (25). In this respect, the book is highly useful for pastors who desire to know the human circumstances that underpinned the bold confession of faith made at the time of the Reformation. Kolb sheds much light on the historicity of the texts of our Confessions.

With respect to the overall structure of Dr. Kolb’s book, the chapters of The Way of Concord arose over two decades and were originally written as separate essays later edited into the present volume. This makes it difficult to identify the major thesis of the book, and sometimes interrupts the flow of the book.

On the place of the Confessions in the life of the Church, Dr. Kolb speaks of them as primarily an example or model for church discourse and confession as opposed to confessions that each generation of Lutherans makes their own by confessing them as “now first uttered by our lips, or now first gone forth from our hands.”[1] According to Kolb, because confessions “are bound in their own times, [they] may not make good reading for the beginning of a person’s exploration of the faith. But because they are set in the eternal word of God, they do provide guidance and insight for believers of all subsequent ages” (97). Here is a weakness of the book. Kolb does not sufficiently discuss the ecclesiastical authority of the Confessions for Lutheran churches today. The exegesis of our forefathers in the faith and the dogmatic assertions that follow from their sound exegesis are grounded upon “the pure, clear fountain of Israel,” the Holy Scriptures—the very claim of a quia subscription. Thus, they do not merely provide guidance and insight for believers of all subsequent ages. Rather, they are the clear and concise eternal confession of the hope that we have drawn from Scripture. “Therefore, it is our intent to give witness before God and all Christendom, among those who are alive today and those who will come after us” (SD XII 40, emphasis added).[2]

The historical insights of Dr. Kolb are of value to those who are unfamiliar with the human circumstances that lie behind the Book of Concord. In this regard, The Way of Concord is a useful book for the academically-inclined pastor or the interested layman. But readers should look elsewhere to understand the contemporary authority of the Confessions.