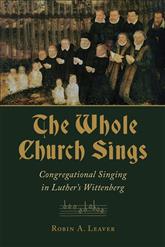 The impetus for the writing of this book seems to have been a desire to demonstrate that congregational singing in Wittenberg was not an afterthought of the Reformation, notwithstanding the claims of other scholars to the contrary. Those claims are buttressed in the main by dates of publication, especially the date of 1529 attached to a significant Wittenberg hymnal. What Leaver shows in thorough and masterful fashion, accompanied with copious documentation, is that those claims are unsupportable. Significantly, the existence of a Wittenberg Enchyridion in 1526, which was itself the product of earlier editions, and of Johann Walter’s 1524 Chorgesangbuch, shows that vernacular singing was a prominent concern of the Reformers dating from 1523 at the least. “The long-standing assumption—that the first Wittenberg hymnal was choral and primary and that the congregational counterpart [of 1529] was secondary and later—can no longer be maintained” (116).

Leaver’s research also reveals, even apart from the virtually irrefutable evidence, the historical likelihood that the phenomenon of congregational singing would have accompanied the Reformation from its onset. His chapter on pre-Reformation folk singing is a fascinating foray into the cultural life of the common folk, whose news was usually transmitted across the land in just this way, via Volkslieder. A major feature of this book is a demonstration of the significant contribution of music toward the success of the Reformation. “Every aspect of life was put into songs, especially the things that were deeply felt, such as one’s religious beliefs” (81). Folk songs soon popped up whose subject was Martin Luther himself. The culture was already ripe for the onset and use of Lutheran hymns in worship, and Leaver asserts convincingly that “[t]he Reformation may have begun in 1517, but it can be argued that only after 1523, when the hymns first began to appear, did it really begin to take hold” (7).

The development of the printing press is something that is customarily associated with the success of the Reformation, but what Leaver’s research emphasizes is what the printing press specifically produced, in addition to Luther’s works, that was profoundly helpful: an increasing number of German songs that circulated not only orally, but on broadsheets or pamphlets. The great popularity of this music even led to the spontaneous interruption of popular songs at the Christmas Eve Mass at the parish church in Wittenberg in 1521. Traditionalists reported this to the Elector as part of an attempt to depict the crowd as unruly, but Leaver suggests, in view of the subject matter of these songs, a greater likelihood that it was more of an expression of religious devotion (44).

Some customary aspects of folk singing were adapted by the Reformers in the crafting of their hymns. Most notably, Luther took advantage of the use of a single and popular melody for more than one song. “He was fully aware of the fundamental role that music would have to play in the introduction of new hymns into Wittenberg worship, since collectively they gave the congregation a much greater role in singing than had been the custom hitherto” (79).

Additionally, many of Luther’s hymns were written in bar form, “the mark of a skillful Meistersinger.” One may often hear a Luther scholar dispelling the misinformed interpretation of that term as an indication that Lutheran hymns were adaptations of songs that were sung in bars: “bar form,” they will rightly point out, and as Leaver also indicates (chapter 2) is a reference to the structure of the song. Curiously, however, this study suggests that the Lutheran hymns may well have been sung in taverns, “printed on single sheets, sung by ballad singers, and pasted on the walls of inns and other public places” (79); for music was critical to the success of the Reformation, in ways that Leaver’s most helpful research makes abundantly clear, even more so than one might have thought.