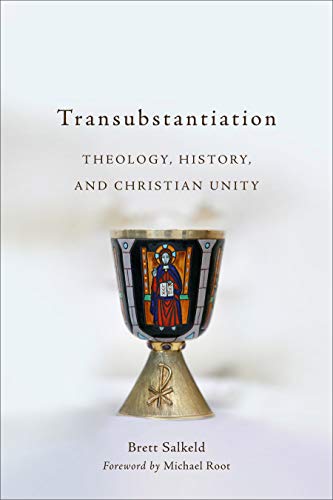 This brief dialogue from The Princess Bride parodies the vexing problem that for the past forty years has prevented further progress in ecumenical dialogue on real presence in the Eucharist, namely, the word transubstantiation. Lutherans, Reformed, and even many Roman Catholics—lay and academic—keep using the word transubstantiation thinking it means what it does not mean. Salkeld’s stated purpose is to answer the following question posed by Walter Cardinal Kasper, president emeritus of the Pontifical Council for Promoting Christian Unity: “Can consensus be found about the meaning of the term transubstantiation repudiated by all the reformers, or does the rejection of this term demonstrate that a deeper difference still remains in the understanding of the real presence of the Lord?” Salkeld argues that consensus can be found and sets out to achieve that goal. Transubstantiation, properly understood, can serve as a stepping-stone rather than a stumbling block not only to closer Catholic-Protestant understanding, but also closer intra-Protestant understanding of eucharistic real presence. In other words, our similarities in understanding eucharistic real presence are deeper than our differences. On a more practical note, Christians will not know (or trust) that official ecumenical agreements have truly resolved our differences in the absence of consensus on the meaning of transubstantiation.

Salkeld divides the book into four chapters: an introduction followed by a chapter each devoted to transubstantiation in the Catholic Tradition, Luther, and Calvin. The real absence of a chapter devoted to Zwingli is intentional, if not ironic. Salkeld justifies Zwingli’s omission to the marginalization of his position in ecumenical dialogue. Zwingli, however, makes cameos in the chapters on Luther and Calvin. Salkeld draws a parallel between Aquinas’s defense of eucharistic real presence against Berengarius to Luther’s defense against Zwingli and the Swiss. Given Salkeld’s acknowledgment that “Zwingli reigns in the pews” of many Reformed churches, the addition of a separate chapter devoted to Zwingli is warranted.

Salkeld attributes the corruption of the term transubstantiation principally to the philosophical shift from realism to nominalism in the High Middle Ages. For the philosophically unversed—present company included—Salkeld’s discussion can, at times, seem like a battle of wits. Read slowly. Simply put, Aquinas and the realist define substance as the deepest, imperceptible reality of a created thing, the thing in itself, and accidents as the perceptible reality or attributes. Both substance and accidents are real creations of God. Salkeld devotes chapter 2 to articulating the original meaning of transubstantiation affirmed by Lateran IV and taught by Aquinas. For chapter 2 alone, Salkeld’s book deserves a place on one’s bookshelf. Under the influence of nominalism, the meaning of substance changed to include quantity, for Aquinas an accident. According to nominalists, a substance without quantity exists in name only. By the sixteenth century, transubstantiation no longer meant what Lateran IV or Aquinas meant. The stage was set for the rejection of transubstantiation, thus redefined, by the reformers. Ironically, by rejecting transubstantiation, Luther, Calvin, and the reformers rejected what neither Lateran IV nor Aquinas meant by the word transubstantiation. In other words, transubstantiation did not mean what Luther, Calvin, and the reformers thought it meant.

Salkeld spends chapters 3 and 4 untying this Gordian knot by establishing many points of agreement between Aquinas, Luther, and Calvin based on Aquinas’s original definition of transubstantiation. In one striking example, all three men reject the teaching of the bread and wine’s annihilation. So, Benedict XVI can confidently assert that “bread and wine, as physical-chemical entities continue to exist unchanged.”[1] Inconceivable!