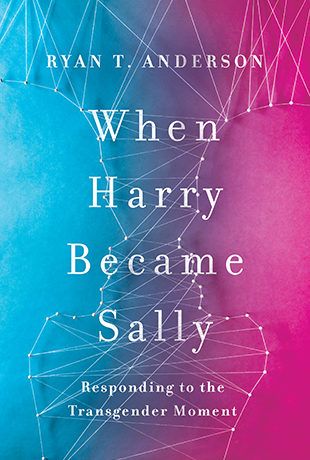 If Rip Van Winkle were to wake up today from a twenty year sleep he would find the world unrecognizable. The technological advances boggle the mind. Our phones seem smarter than we are. But such changes pale in comparison to the revolution in matters of marriage, sex, and the basic perceptions of who we are. So-called gay marriage, once unthinkable, has become normalized to the point where it is hardly questioned or even noticed. Polyamory is reported but hardly elicits a shrug. Cross-dressing and gender bending, once considered fringe novelties, have been mainstreamed.

Now we have come to what Ryan T. Anderson calls the transgender moment. When gold medalist Bruce Jenner declared himself a woman, all evidence to the contrary, we knew we were in for a bumpy ride. Will no one say that the emperor has no clothes? Or at least that the dress does not fit? A boy is said to be trapped in a girl’s body, and a girl in a boy’s. At birth, a mother exclaims, “It’s a boy.” Yet now we are told that this is not a matter of biological recognition but of sex assigned at birth. We are told now that there are over fifty genders and that they are fluid. To bolster this gender ideology new pronouns have been fabricated. It is no longer a matter of his and hers but “xyrs” and “zirs,” “vis” and “nirs.” Pity the fool who uses them. As with the redefinition of marriage, this has enormous implication for our first amendment rights, including freedom of speech and the free exercise of religion. Fines and penalties are imposed on those who do not play along. As Anderson notes, this radical gender ideology is placing all of our children in jeopardy. School restrooms have been opened up, with boys entering into the place reserved for girls. This also affects overnight sleeping arrangements for school trips. Males are now allowed even to participate in women’s sports, often dominating. The ramifications are stunning.

Each of Anderson’s books is worth reading, including his works on marriage and religious liberty. Yet When Harry Became Sally may be his best yet. While his writing is known for clarity and airtight arguments, this is perhaps his more charitable and deeply human endeavor. As Anderson notes in the title, this is a transgender “moment.” By that he means, I think, that this will prove to be an unfortunate blip in human history, a kind of blindness born of mass delusion. In the meantime, though, we should not be so sanguine. The dangers of this moment are great. Of course there is the threat to our rights of conscience. People who demur are often sidelined, losing their jobs and their reputations. But perhaps most disturbing is the way that those suffering from gender dysphoria are played like pawns.

What is gender dysphoria? It is the feeling, held by a few, that they are trapped in the wrong body. This discomfort is real, as is the anguish. What causes it? There may be biological factors. But other circumstances come into play. Here there is a boy who is sensitive and feels left out. He begins to play with the girls, doing quieter things, perhaps arranging furniture in a doll house. Over here we find a girl who likes to mix it up—a bit of a tomboy who wants to play rougher sports. Throw into the mix a son raised by a mom who wanted a daughter. Consider the boy who could never live up to his father’s expectations. For so many reasons children feel left out, not knowing how they fit in. In days past a child would be given the opportunity to discover himself. Perhaps a sensitive boy would find other boys who were not so rough. A girl could play with the boys with nothing assumed. But now gender ideology steps in and turns temporary questions into permanent and irreversible decisions.

The protocol for dealing with gender dysphoria is frightening. A young boy confused about his own identity is typically transitioned at an early age and given a new name to fit his new gender, along with new clothes. There is something perverse and backwards about such thinking. Why did Bruce Jenner start to wear dresses? Are we saying that women are defined by wearing dresses? I thought we were beyond such stereotyping. But nevertheless a child is dressed up. Then, according to the suggested protocol, that child is given puberty blockers and encouraged to stay in an unhealthy state of suspended animation. With the onset of puberty, a young person is then given estrogen or testosterone. Finally, at the age of eighteen, that person is eligible for body-altering and mutilating surgery. Facsimiles of body members are created and carved out. It is difficult to write this but this is the sordid truth of our age.

Anderson contends that we are pigeonholing children who would have probably grown out of their dysphoria. Some 80-95% of children, given no such treatments, will eventually come to embrace their bodily gender. But instead of offering counseling and real help, we reinforce the delusion, leaving many to live with regrets, and bodies that have been forever altered. The cruelty of such an approach is horrifying. Anderson sensitively tells the stories of those who have gone through the protocol only to regret their decisions. It is sometimes hard to read and yet we cannot but feel for these people. Their stories must be heard so that others need not go down such paths. Anderson also offers hope. There are good counselors, people like Dr. Paul McHugh of Johns Hopkins, who see the problem for what it is and are able to help.

As Anderson notes, our sex differences, male and female, are not really fluid nor are they a matter of body part here or there. Instead male and female are written into every cell of our body. Instead of trying to create new bodies, in which the suffering will be comfortable, we must be about the business of helping people feel comfortable in the bodies that they have. No surgery can ever change a man into a woman, or a woman into a man. It will be cosmetic at best. What is needed is sensitive counseling and love for those who are confused. Given our society, one in which we have no idea what marriage even is, it is no wonder that so many of our young people are indeed confused.

What is the way forward? If we are concerned with human flourishing we do well to return to natural law and to the essential truth and goodness of male and female. Boys and girls are different and that is a good thing. Only a woman can be a mom and only a man, a father. Children need counseling and love, not hormones and surgery. As parents, we must be vigilant. Those who push the transgender ideology are aggressive. For the sake of our children and grandchildren, we must be aggressive, too. There is so much at stake, including our rights to free speech and exercise of religion, the safety of women, and the well-being of all those who suffer and are confused. The transgender moment is our moment to stand up and be counted. If you want to be part of the solution, read this book. Then buy copies for your friends. It is that important.